Vladan Seget  Tue, Mar 28 2017Tue, Mar 28 2017  virtualization, vmware  5
VMware vSphere Fault Tolerance (FT) is an awesome feature allowing you to set up a total fault-tolerant zero-data-loss architecture with a single right-click of a mouse. In case the underlying host has a hardware problem, there is zero downtime, zero data loss, zero connection loss, and continuous service.

Note that if a High Availability (HA) cluster protects the virtual machine (VM), it has to restart on another host. Thus, even if the whole process is automatic, there is still downtime. This is not the case for VMware FT where the secondary VM becomes the primary one within a fraction of a second. This feature automatically clones a new secondary VM from the new primary VM.

In the past, admins have used FT sparingly because it had a big overhead. There was also quite a lot of network latency, which would interfere with certain applications. In addition, FT was limited to VMs configured with one virtual CPU (vCPU) only. Conversely, vSphere 6.5 brought not only the possibility to configure four vCPUs for FT-enabled VMs, but also completely changed the technology under the covers and significantly improved the network latency.

Previous releases of vSphere used vLockstep technology where the primary and secondary VMs were in sync via Record/Replay. As of the 6.5 release, vSphere is now using a technology called "Fast Checkpointing." 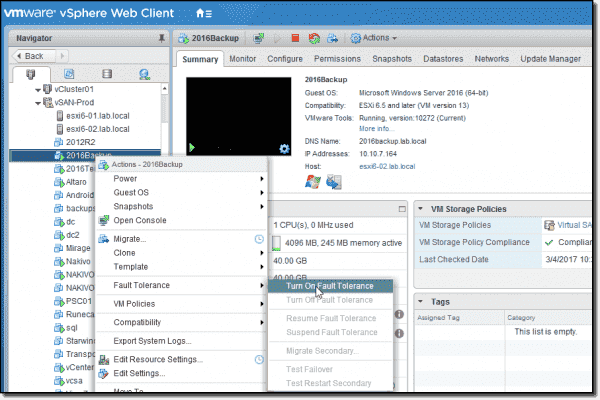 To put it simply, vSphere FT works by continuously replicating an entire running VM from one physical server to another. The FT-enabled VM has two replicas:

Each VM is running on a different ESXi host. The replicas are logically identical; they represent a single VM state and a single network identity, but they are physically distinct.

After activation of FT, the first synchronization of the virtual machine disk files (VMDKs) happens using vSphere Storage vMotion. Subsequently, vSphere FT will mirror VMDK writes between the primary and secondary VM over the FT network.

To check the VM's state, you can also see the dashboard widget with detailed log bandwidth usage.

Another improvement of VMware FT is that you can now configure FT networks to use multiple network interface controllers (NICs) to increase the overall bandwidth for FT logging traffic. This works similarly to Multi-NIC vMotion and provides more bandwidth for the FT network.

You can test FT from within the right-click menu when you click on the FT-protected VM. There are several options there.

What are the VMware FT limits? ^

VMware vSphere 6.5 has a few FT technical limits and there are also licensing limits. I'll cover both.

These are the vSphere FT maximums:

As to VMware licensing for FT, you have access to FT with vSphere Standard, but you can only configure two vCPUs. To activate four vCPUs for your FT-protected VMs, you need to be on Enterprise Plus or vSphere with Operations Management. 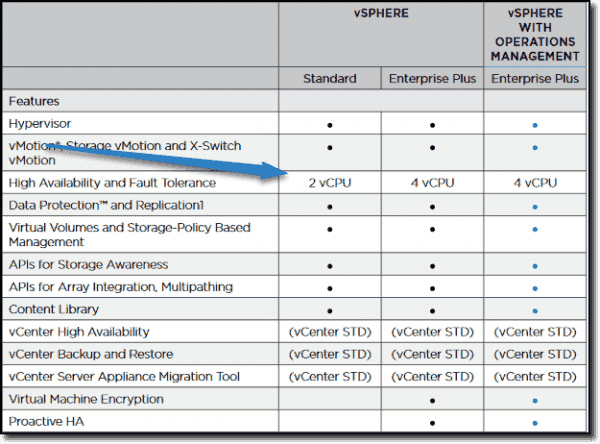 VMware vSphere 6.5 FT improves the integration with vSphere Distributed Resource Scheduler (DRS) and allows better placement decisions. It now ranks hosts based on available network bandwidth and datastore latency for placing the secondary VMDKs. You can use multiple port groups for FT logging traffic to add capacity to existing network bandwidth in a similar way as for Multi-NIC vMotion.