Vladan Seget  Mon, Aug 8 2016Sat, Aug 20 2016  virtualization, vmware  2
VMware VSAN is a hyper-converged infrastructure (HCI) solution that enables you to use a local storage by all hosts within a VMware cluster. VSAN creates a single, shared datastore by pulling local capacity resources together (HDDs/SSDs/PCIe NVMe cards).

Many vendors, such as Nutanix, Atlantis Computing, StarWind, and Scale Computing, offer hardware and software solutions for HCI. Some of these solutions are based on proprietary file systems, while others rely on open source. Microsoft Storage Spaces Direct, which will be delivered with Windows Server 2016, will be another one to be aware of.

However, VMware VSAN is the only solution that is tightly integrated with the VMware infrastructure. It is part of the ESXi 6.0 kernel, so there is actually no additional installation necessary if you’re already running a VMware cluster.

Let me first explain the benefits of HCI over traditional virtualized architecture, wherein the shared storage is a dedicated SAN/NAS storage system: 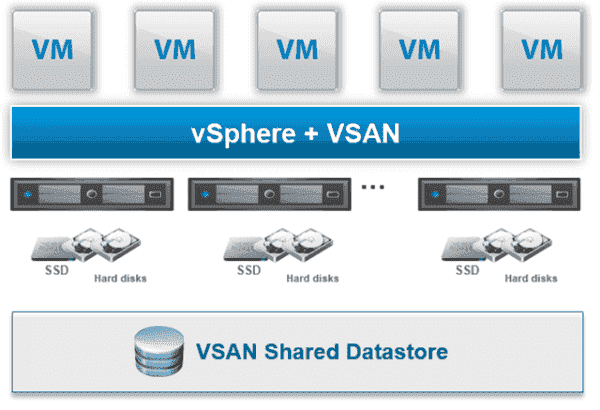 VSAN Hybrid and all Flash versions

A VMware VSAN can be implemented in different ways depending on your needs:

If you have followed my VMware HA cluster series, you know how to set up a VMware cluster. When all hardware requirements for VSAN are met, reconfiguring an existing cluster is a matter of a few configuration steps. One of them is a VSAN Activation checkbox (see below). 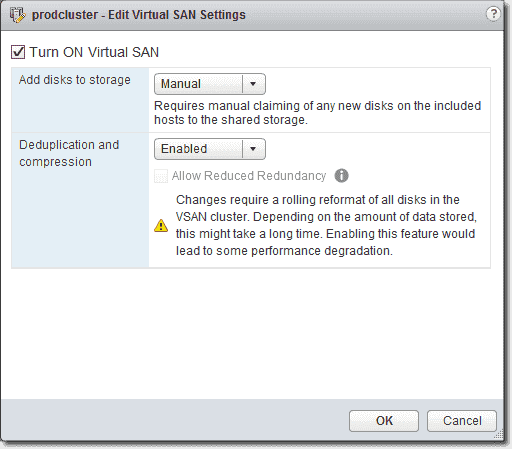 VMware VSAN and other HCI solutions allow linear performance growth without creating traditional silos. VSAN permits smaller datacenters to adopt an architecture similar to the ones used by large companies, such as Facebook, Google, and Amazon. VSAN can scale up to 64 nodes with up to 6,400 VMs!

Additionally, VSAN as a software solution provides the flexibility we don’t have when using traditional hardware SANs. It allows businesses to gradually increase investments in their infrastructure. There isn’t a big investment needed at the beginning, because you don’t have to buy a big, high-performance storage SAN device.

It’s fairly simple to add a node to a VSAN cluster when you need more capacity. When adding a node, you do not have to create a new datastore; the unique VSAN datastore is already there. Whenever you add a new VSAN node, you just add more capacity.

Also, if an old node and needs to be replaced, it’s easy to put the node in maintenance mode to evacuate VMs. You can then decommission the node.

In my next post, I will dive deeper into VSAN system and hardware requirements.