Vladan Seget  Mon, Sep 12 2016Tue, Sep 13 2016  virtualization, vmware  0
This post will walk you through configuring the least costly hardware and software license of VMware: VSAN for ROBO. (We covered the VMware VSAN Stretched Cluster architecture and deployment in a previous post.)

Let’s first say a few words about the licensing of VSAN, as we have yet to cover this subject. A 2-host VSAN deployment model is not restricted to a specific VSAN license type. In other words, VSAN Standard, Advanced, Enterprise, and ROBO licenses can be used for a 2-host VSAN configuration.

However, some features, such as RAID-5/6 erasure coding, require more than two physical hosts. We’ll cover erasure coding in our next post.

VSAN comes in three different licensing packages, which are outlined in the figure below. 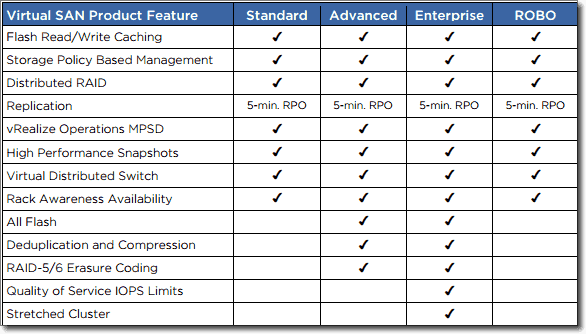 Although the first three licensing types (Standard, Advanced, and Enterprise) are priced per physical CPU, the VSAN for ROBO licenses are priced per virtual machine (per VM) and sold in packages of 25. A pack of 25 licenses can be shared across multiple locations (e.g., in five remote offices each running five VMs).

Each remote office is limited to a maximum of 25 VMs under the VSAN for ROBO licensing model. If more than 25 VMs are running at a remote office, VSAN Standard, Advanced, or Enterprise licensing must be used.

The VSAN for ROBO configuration needs two hosts at each remote location, where each is placed in a different fault domain. The third host is placed outside of the VSAN cluster. 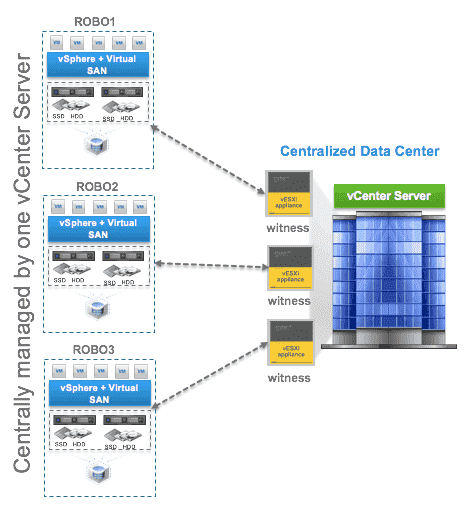 As with many clustering technologies, a third system is required to serve as a “tie-breaker” in certain situations, such as in the loss of network connectivity between the two physical hosts. This third system is called a Witness. VSAN utilizes a vSphere host—a VM that runs ESXi—as the Witness for a 2-host VSAN cluster. It is worth noting that you don’t need a particular license for this virtual ESXi, as it comes with the license.

Steps for configuring the VSAN for ROBO ^

First, to configure the network for VSAN on the Witness host and on both ESXi hosts, you must ensure that you have one VMKernel adapter for VSAN traffic per host. (We also outlined the steps for setting up a VMKernel adapter in a previous post.)

You must also make sure that you meet the following requirements: less than 500 ms latency over a 100 mbps link and a minimum of two hosts in your ROBO environment.

Then, connect via the vSphere Web Client to create a cluster object. In our test, we call it VSAN ROBO. Next, select VSAN ROBO object > Manage Tab > Virtual SAN > General > Configure.

This will launch the VSAN assistant, where you will select the “Configure the two host Virtual SAN cluster” option. 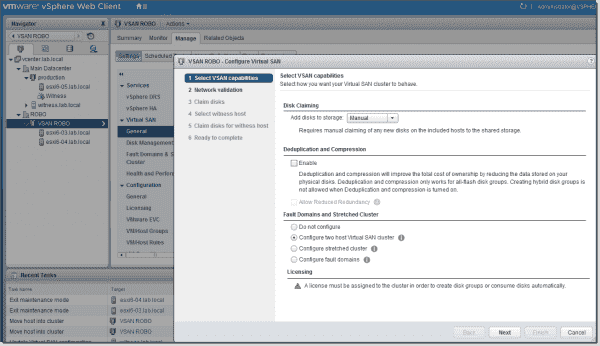 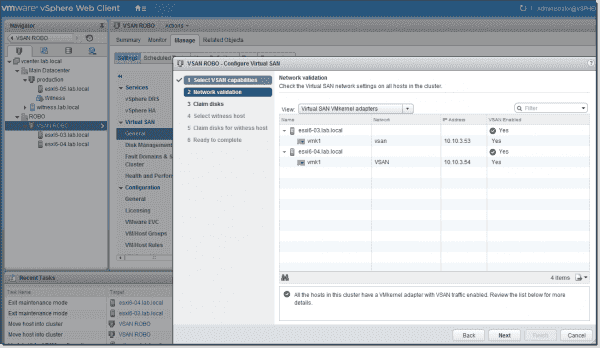 Then, the “Claim disks” tab will be used to select the disks for VSAN. You can sort them by disk model or size. Choose similar disks in each of the two hosts according to their capacities; after, click the “Next” button. 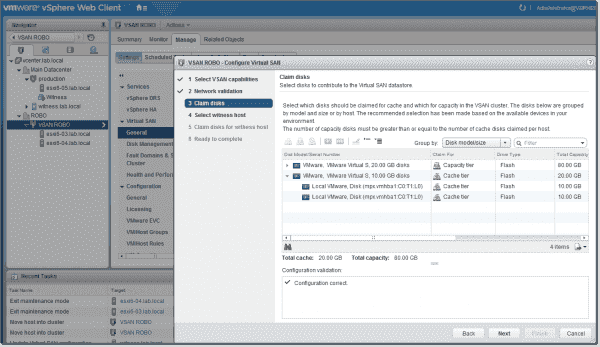 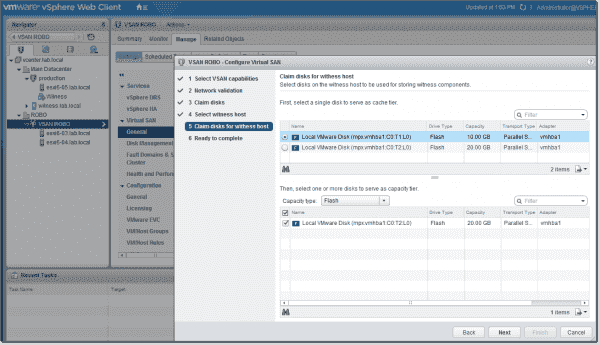 After, a final screen will allow to you review the different options you have selected. 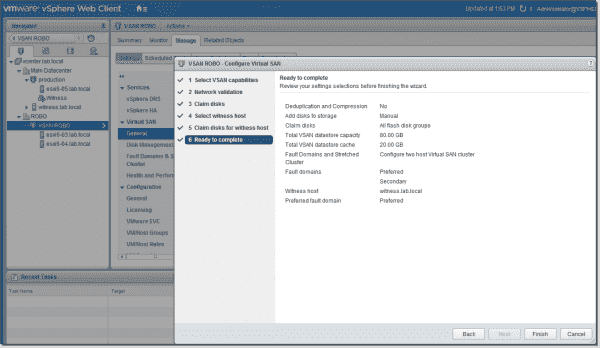 Once you click Finish, the system will work a little bit. Depending on the capacity, it might take some time to claim all the disks and format them according to the VSAN elements.

After this process is complete, you should assign a VSAN license.

If you want your VMs to restart in the case that one of your hosts has an unexpected hardware failure,  activate high availability (HA). 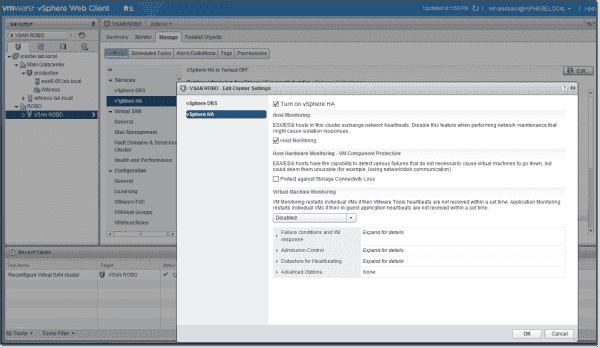 Congratulations on successfully configuring VSAN for ROBO. As aforementioned, a 2-host VSAN cluster requires a third host that does not contribute to storage but only has a Witness role.

With VMware HA and VSAN both active on a remote site, only the minimum hardware requirements (i.e., two hosts) should be met and only local storage should be used to remain fully protected in the case of an unexpected hardware failure. There is no need to invest in separate SAN hardware.

So far, we have only used a RAID-1 mirror in our VSAN configurations. In the next post, we’ll demonstrate the use of RAID-5/6 save disk space. We’ll also provide steps for deduplication and compression, which can be activated in All-Flash VSAN configurations.