Vladan Seget  Wed, May 13 2020Wed, May 13 2020  storage, virtualization, vmware  0
VMware vSphere 7.0 released recently has brought some enhancements into the vSAN capacity reporting capabilities. Where the 6.7 release has already had already some improvements in vSAN management, the 7.0 release got even better.

vSAN 7.0 got some hardware enhancements as well. vSAN now supports 32TB drives which also increases the maximum storage capacity to 1PB.  Also, on the hardware side, and this one is a very useful feature, it is an NVMe hot-plug support.  You don’t need to shut down a host to replace faulty NVME drive.

We have already reported that vSAN 7.0 supports file services such as NFS 3 or 4.1 and also quotas.

From the management standpoint, the 6.7 release has had still the mandatory Adobe Flash, the vSphere 7.0 came out with fully functional HTML 5 based web client only. All functionality built in vSphere is now accessible via most of modern web browsers.

In VMware vSAN 6.7 U1, admins had a possibility to view an estimate the amount of usable capacity based on a desired storage policy.

VMware VSAN 7.0 kept this and enhanced even further giving the administrator a detailed preview of capacity consumption directly from the summary overview page.

Usually, the size of a swap file is the same size as the amount of memory configured for the VM. As all objects on a vSAN datastore are thin-provisioned, the storage consumption is optimized.

The reporting of the real capacity consumed by these thin-provisioned objects are more precise in this release.

In this section you’ll find some details about how much space your VMs are consuming on your vSAN Datastore.

To do so, select your vSAN cluster > Monitor > vSAN > Capacity

You can just hover the mouse over the graph, which is interactive, to get the details. 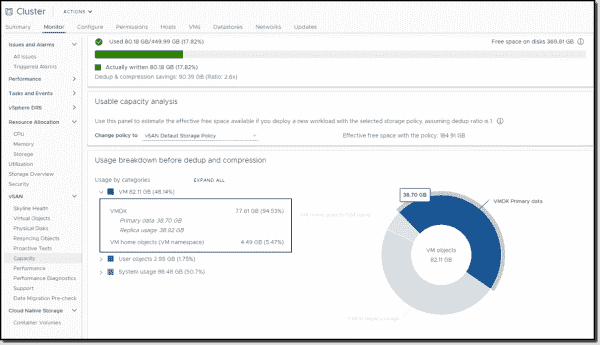 You can find how much space all the virtual disk space is consuming. How much space is consumed by snapshots, or internal operations. It allows you to predict and plan future growth of your vSAN storage by adding a second storage group on each host or by adding some additional hosts into your cluster (scale out).

What’s great with vSAN that while the number of disk storage group per server is physically limited (you can’t add disks indefinitely), you can extend the cluster by adding more hosts. And your vSAN datacenter will just increase its capacity automatically.

Newly in this release of vSAN, you can find also how much space is consumed by objects used for replication from host to host, because as you know, you can set different storage policy for your VMs (Raid 1, Raid 5 or so) and as such the replication objects consume more or less space. Space reporting for these objects can be found within a special section called User Objects.

In order to view all the details of all sections, simply click the Expand all or Collapse All link (which changes from one to the other text when clicked).

Expand and collapse all sections

vSAN 7 capacity view enhancements gives you really all details you need about your vSAN datastore, the VM objects, but also the system usage. VMware has done a great job with the graphics too which are interactive now.

The vSphere Replication object capacity usage is now available as dedicated section which adds more to the pleasant management experience.

As being said, the more precise reporting allows you to plan ahead and decide whether your infrastructure’s VMs growth must be backed up by adding more capacity to your vSAN datastore by adding more disk groups or more hosts to your cluster.

However, you might see this still quite limiting but products like VMware vRealize can perhaps help further.

With correct and detailed reporting admins can avoid issues of storage space. Additionally, VMware recommends that not all vSAN capacity can actually be used for VM storage and that you should keep 30 % of free capacity to actually prevent vSAN to rebalance the VM components across cluster. If a single capacity device reaches 80 % vSAN launches rebalance operation, which has performance impact.

You should plan extra capacity in case you have a drive failure so the system can easily recreate the components while you replace the drive.

VMware recommends 4 hosts as a minimum, for vSAN cluster. This is because if there is a host failure and the Primary level of failures to tolerate is set to 1, you still have 3 remaining hosts to accommodate the failure. The objects can be safely rebalanced. Not if you only have 3 hosts in total.

I would personally do not recommend using spinning media at all because the current price point is mostly equal to SSDs based media.