Vladan Seget  Thu, Dec 29 2016Mon, Jan 9 2017  storage, virtualization, vmware  0
With the recent release of vSphere 6.5, VMware introduced vSAN 6.5. VMware vSAN 6.5 is part of the ESXi hypervisor and therefore available on every ESXi host. However, by default this kernel module is not active. To activate vSAN, your system has to fulfill a few requirements that I have discussed in my vSAN series. Let's have a look at the new vSAN 6.5 features.

vSAN 6.5 can now act as an iSCSI target for external hosts and external physical servers which need the traditional iSCSI protocol to access data. Previously, only hosts that were part of the vSAN cluster had access to the vSAN storage.

The new iSCSI Export feature makes the storage visible outside the cluster and workflows that need block storage such as Microsoft Clustering Solutions (MSCS) or physical servers. More and more servers are virtualized, however, physical servers still exist in many environments. VMware’s strategy is to provide vSAN storage features that are useful in hybrid environments with virtual and physical systems.

vSan Direct Connect is a new feature of vSAN 6.5 that is a very useful feature for small businesses. Whereas the previous release of vSAN required an expensive 10 GbE switch for All Flash (AF) configurations (flash-based devices for both caching and persistent storage), vSAN 6.5 can use a pair of crossover cables that connect two nodes. This configuration also maintains the traffic when you use vMotion to evacuate a node during maintenance tasks.

Note that a 1 Gb switch is still required, which maintains connectivity through the management network interface. The management network needs to activate witness traffic, which carries the metadata to the witness appliance. In this release, you have to tag the VMkernel network adapter for witness traffic through the command line interface (CLI). There is no graphical interface.

vSAN Direct Connect is mostly used for Remote Office Branch Office (ROBO) architectures where two hosts only need to be installed and populated with internal storage. vSAN 6.5 then provides the shared datastore space where the virtual machines can be stored and executed.

While it is technically possible to use just one crossover cable for connecting the two data nodes, VMware recommends using two cables. On the image below, we can see the architecture where the witness appliance is in the main datacenter and replication traffic is maintained via a switch. 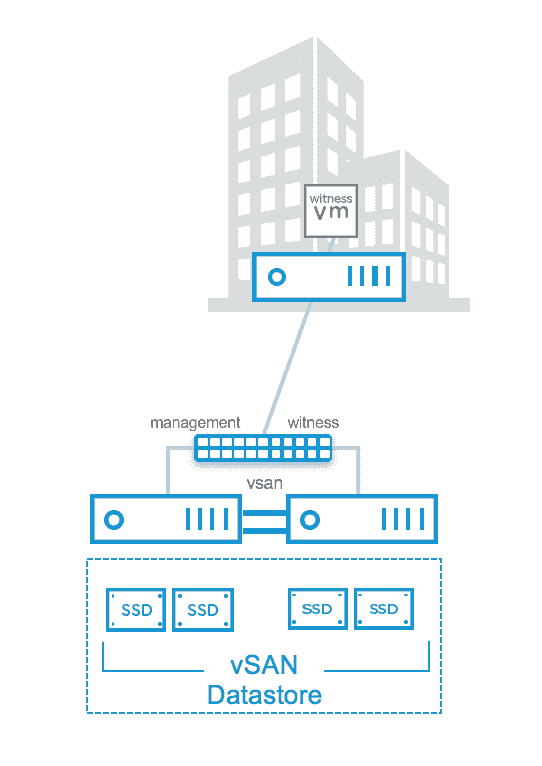 VMware have adjusted the licensing for vSAN, which reduces the total cost of ownership (TCO) by 20-50%. Starting with this release, an All-Flash (AF) version of vSAN can now be installed not only on the Advanced and Enterprise editions but also on vSAN Standard, which previously only supported hybrid configurations (SSD plus spinning media).

However, space saving technologies such as deduplication, compression, and erasure coding still require the Advanced edition (I discussed these features in a previous post). The Enterprise edition adds Stretched Cluster support as well as the ability to configure QoS IOPS limits. Note that ROBO licensing now also supports AF configurations.

The updated vSAN API and new PowerCLI cmdlets allow you to automate the creation, configuration, and monitoring of vSAN clusters. This is very useful in scenarios where you have to repeat the same deployment scenario for multiple remote offices. PowerCLI enables you to script the deployment and configuration and allows you to use the exact same configuration across all your sites.