vSphere 7 and vSAN 7 have many improvements. The enhanced capacity reporting  in vSAN 7 includes new capabilities with a detailed view of storage consumption. vSAN 7 offers new possibilities for configuring native file services, NFS v3 and 4.1, to provide storage for Kubernetes or other applications running on vSphere 7. There's more, too.

While vSphere 6.7 introduced an assistant for the configuration of HA clusters and vSAN, vSphere 7 goes further to enable creating and configuring a distributed vSwitch during the process.

As you know, if you're a vSAN customer, you don't need a special license for DVSwitch, as this is included in you vSAN license. Even small customers with three to four hosts can benefit from DVSwitch in their vSAN 7 infrastructure.

The wizard walks you through the process of configuring vSAN 7. Note that you can clear the selection and configure the networking at a later stage. 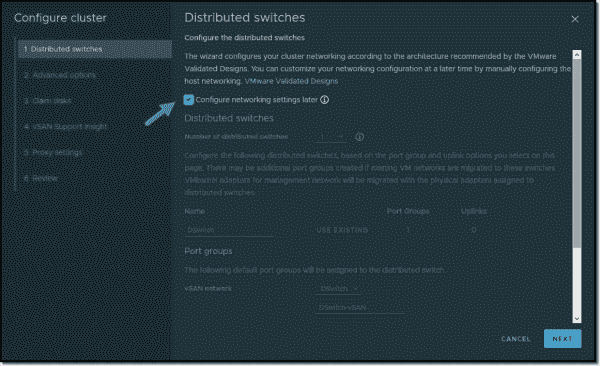 Case 1: The Witness Host is a virtual appliance with a special free license provided by VMware. However, the appliance is not able to run any VMs, as by its nature it is a VM too. It's only used to store the Witness objects that are needed to determine synchronization during split-brain situations.

Case 2: You can use a regular ESXi host, which can be configured to be a Witness Host.

The vSAN Witness Host has to be managed by the same vCenter Server that manages the vSAN cluster.

Network communication between nodes and the Witness Host ^

The vSAN Witness Host must also have connectivity between hosts and into each vSAN node. The important thing is that the Witness traffic is separated (a separate VMkernel interface must be tagged with witness traffic).

The deployment assistant allows you to choose which type of deployment you'd like to do. In our case, we're testing the two-host vSAN cluster. 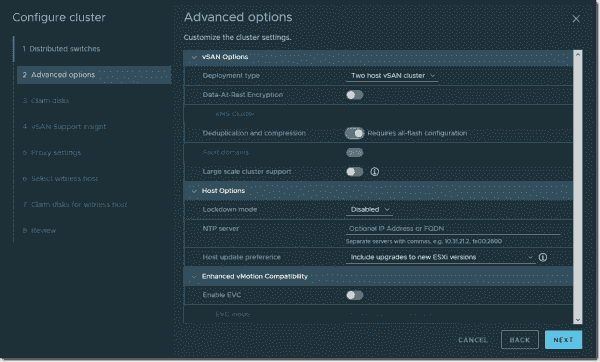 The rest of the assistant is mostly the same, except for this screen. As you can see, vSAN Support Insight is ON by default. 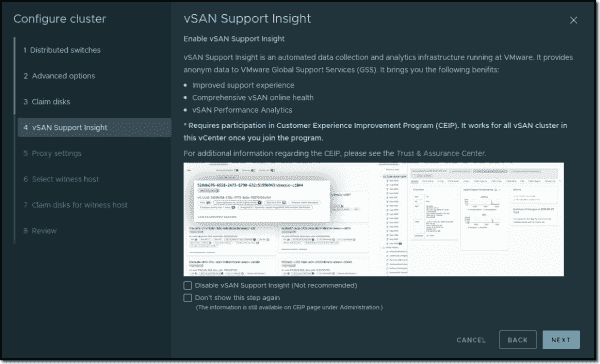 vSAN Support Insight is ON by default

When you call VMware Support, they'll be able to check and repair the problem faster because they will already have most of the data they will need. I should mention here that they collect only anonymous data, such as firmware and driver versions, to identify cluster-level issues.

vSAN 7 has a new capacity and monitoring screen, which also tracks history.

vSAN 7 also has a new pre-check data migration utility, enabling you to see what happens if one of the hosts is offline or in maintenance mode.

In our case, since we only have a two-node cluster, we cannot rebuild the components elsewhere if one node is down. That's the reason for the message. 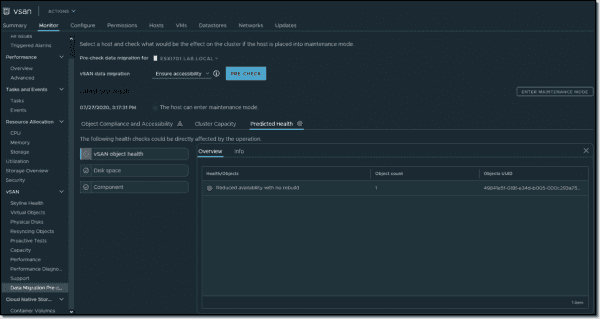 VMware vSAN 7 provides a very quick configuration assistant that enables you to install and configure vSAN in a couple of minutes if all the requirements are met.

It makes more sense to host all Witness appliances on the shared storage of your main datacenter as you won't waste hardware by using the vSAN Witness Appliance, which is a VM.

The best part is that you can use a direct connection between nodes in those remote offices. This means you'll have a data connection via direct connection cables, while the witness traffic travels over the management switch together with the management traffic back to the main datacenter where the solution is monitored and maintained. It saves a lot of money on switching equipment when managing dozens of remote offices with VSAN 7 2 Nodes.