Vladan Seget  Fri, May 21 2021Fri, May 21 2021  virtualization, vmware  0
There are many ways to boot an ESXi 7 host from different media or from a network. The topic of boot options for VMware ESXi is one that you need to master in order to pass the datacenter certification exam. In this post, we can cover only the fundamentals.
Contents

VMware has changed the storage requirements and completely changed the partition layout in ESXi 7. VMware has increased the bootbank sizes, and it has consolidated the system partitions and made them expandable.

The layout of system-storage boot media was changed mainly to prepare for the future, since VMware is planning to add new features and capabilities in later releases. The partition layout can now consume up to 138 GB of disk space, which limits the space available to create a VMFS datastore.

These are the media options for booting the ESXi installer:

Boot from a CD, a DVD, or a USB device

Booting from a CD or DVD is pretty straightforward. It is an interactive process in which you choose the disk or partition where you would like to install the ESXi 7 hypervisor. Other steps, like networking or password configuration, are also easy; so we won't go into much detail here. You can also use a script.

For further details, see "VMware ESXi Installation and Setup," a reference document that is studied to prepare for the VCP-DCV certification exam.

In this network environment, in which you can use the TFTP server to PXE-boot the ESXi installer, you usually choose whether the target host supports a UEFI boot or just the legacy BIOS. Most environments now support UEFI, which was not always the case. 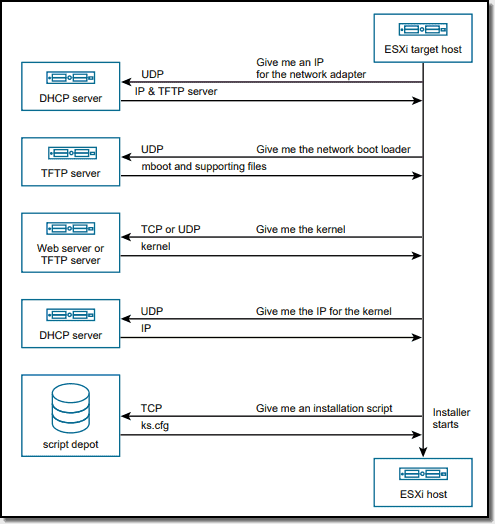 What's happening in the background:

This, in essence, is all the magic of the process.

Press Shift plus O during the boot process

For example, at the runweasel command prompt, you could enter ks= along with the path to the installation script and the command-line options. You could enter the following options to boot the host from a script named esxi-script residing on the server 192.168.1010.10 and set the IP address of the host to 192.168.100.101:

Check the documentation to see all the different options. There is a default installation script included with the ESXi installer that can be used to install ESXi onto the first disk that is detected.

VMware vSphere Auto Deploy makes it possible to install ESXi 7 on hundreds of physical hosts. By using Auto Deploy, experienced administrators can manage large environments efficiently. However, your vCenter server needs to be up; otherwise, Auto Deploy does not work.

ESXi 7 hosts use network booting to boot from a central Auto Deploy server. Hosts can be configured with a host profile created from a reference host. This host profile can be created to prompt for input. After the hosts boot and are configured, they are managed by vCenter Server, as other ESXi hosts are.

Auto Deploy can be configured for either stateless caching or stateful installations:

Stateless caching. Auto Deploy does not store ESXi config or state data within the host (which is why it is "stateless"). Auto Deploy uses image profiles and host profiles to maintain the host configuration.

If a network boot fails, the ESXi host can use a local cache to boot from the last known ESXi 7 image.

Auto Deploy can be configured and managed using a graphical user interface (GUI) in vSphere 6.5 and later.

There is also a PowerCLI method, but the GUI option is easier to use. You must activate Image builder and Auto Deploy services (which are disabled by default) within the vSphere client.

The Image Builder feature in the GUI enables you to download ESXi images from the VMware public repository or to upload ZIP files containing ESXi images or drivers.

You can customize the images by adding or removing components, and you can export images to ISO or ZIP files for use elsewhere.

You can compare two images to see how their contents differ. Use the Deployed Hosts tab to view hosts that are provisioned with Auto Deploy and to perform tests and remediations.

Previous releases of vSphere included only the PowerCLI option for configuring Auto Deploy. But in vSphere 6.5 and vSphere 7, the Auto Deploy and Image Builder options are visible in the GUI, allowing you to create custom ISOs from which you can then boot ESXi 7 hosts on your network.

In many cases, administrators simply deploy the first ESXi host and then deploy vCenter Server and use vCenter Server together with other tools to deploy other hosts and avoid manual configs. These other tools include vSphere host profiles, which can facilitate the deployment and configuration of the remaining ESXi hosts.