A balanced cluster means that your hosts in a cluster will be equally (or almost) balanced. If your cluster is unbalanced, your VMs will be automatically hot migrated via vMotion to the hosts with the lowest resource utilization. For example, if you have DRS within your environment, you should not see a host being used at 99% and another one at 50%.

DRS takes care of balancing the VMs via vMotion. In this post, we'll give you a few tips that will allow you to get the most out of VMware DRS and make this technology worth the investment.

VMware DRS is not part of vSphere Standard and is only included in the Enterprise Plus or Platinum versions. It is always a question whether to go for a version of vSphere that has DRS or not. If I had a chance to choose, I'd certainly prefer the licensing option with VMware DRS.

To give you an idea of what's needed, let's start with the basics. VMware vSphere Distributed Resources Scheduler (DRS) requires the following:

Use homogenous hardware — The first tip concerns the hardware when forming your clusters. The VMware general rule of thumb is to choose hosts with the same or very similar hardware.

There is a reason for that. When deciding which hosts to group into DRS clusters, try to choose hosts that are as homogeneous as possible in terms of CPU and memory. This improves performance predictability and stability.

While the vMotion speed itself can't get faster, because it depends on the underlying networking and storage architecture, VMware was able to optimize the speed of decision making before the vMotion happens.

In fact, they achieved 2-3 times faster decision making capability in vSphere 6.7. One of the improvements was the simplified initial placement, which now in vSphere 6.7 does not snapshot the whole environment but rather just uses continuous monitoring, allowing 1-2 seconds to be saved before each decision is made.

This is especially valuable in high-consolidation environments where you will see reduced resource consumption because of DRS enhancements and reduced latency to generate VMotions for load balancing. You will also see faster initial placement of VMs.

By default, when you enable DRS on a cluster, the automation level selected at the cluster level is applicable to all VMs that reside in that cluster. You can, however, create individual rules for VMs that need to be separated (or kept together).

Migration Threshold — This option allows you to set a threshold that, when hit, causes DRS to kick in and move VMs around to achieve a perfectly balanced state. As the performance of each VM varies, the host's CPU and memory usage vary as well.

You can move the threshold slider to use one of five settings, ranging from Conservative to Aggressive. The five migration settings generate recommendations based on their assigned priority level.

To do that, select your Cluster > Configure > vSphere DRS > Edit > The slider allows you to move from the Conservative (left) to the Aggressive (right) position. 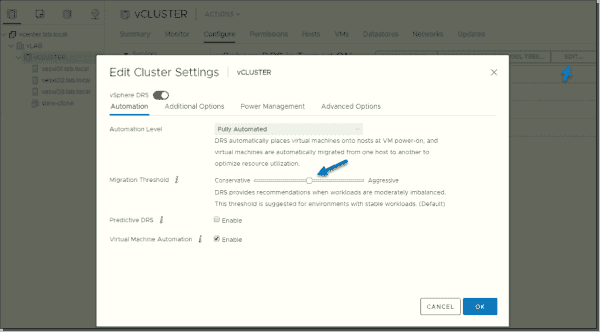 You must determine how aggressively or conservatively that you want DRS to run. I usually keep it in the middle, because if you’re too aggressive, you will most likely be moving your VMs around way too frequently. And remember that with each move, you create pressure on the underlying infrastructure, such as storage or CPU usage. This is because the copy operations during vMotion might saturate network links, and if you don’t have 10GbE (or more), the vMotion operations will be never-ending.

If you leave the setting too low (too conservative), your VMs will not move enough, and the imbalance of your cluster will rise, or will happen more often, without being corrected.

Power off VMs you don't use — Leave powered ON only the VMs you really need. Powered-on VMs consume memory resources and typically consume some CPU resources even when idle.

Even idle VMs with their small utilization of resources can affect DRS decisions. You can obtain a small performance increase by shutting down or suspending VMs that are not being used.

DRS Affinity rules — DRS affinity rules can keep two or more virtual machines on the same ESXi host ("VM/VM affinity"), or, on the other hand, they can make sure they are always on different hosts ("VM/VM anti-affinity").

Usually it's best to leave the affinity settings unchanged. In some specific and rare cases, however, specifying affinity rules can help improve performance.

To change affinity settings: Select a cluster > Configure > VM/Host Rules > Add, enter a name for the new rule, choose a rule type, and proceed through the GUI as appropriate for the rule type you selected. 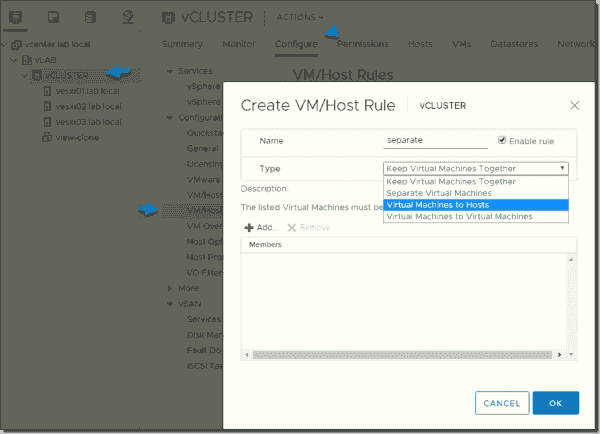 Besides the default setting, the affinity setting types are:

Keep Virtual Machines Together — This affinity type can improve performance due to lower latencies of communication between machines.

Separate Virtual Machines — This affinity type can maintain maximal availability of the VMs. For instance, if they are both web server front ends to the same application, you might want to make sure that they aren't affected by server failure (if that happens). So those two VMs would not be powered off at the same time. This can also keep two domain controllers separated on two different hosts, so users can be authenticated and can access resources.

Virtual Machines to Hosts — These affinity types can be useful for clusters with software licensing restrictions or specific availability zone requirements.

As you can see, VMware vSphere DRS is adaptive for many scenarios. The default settings work out of the box, but you have many choices to adapt it to your environment if needed.

By understanding your workflows and your requirements, you'll be able to configure vSphere DRS to get the maximum performance and maximum benefit from your virtual infrastructure.