Vladan Seget  Fri, Mar 27 2020Fri, Mar 27 2020  virtualization, vmware  2
VMware released App Volumes 4 recently and improved this very popular virtual desktop infrastructure (VDI) product. The application is faster and more intuitive. The lifecycle of each application has been simplified for the admins, so it's now easier to use.

Previously, in version 2.x, you packaged applications and objects into entities called appstacks. 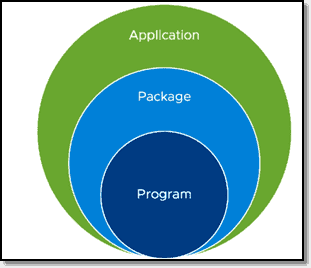 But before we dive into the new features, let's recap the use case for VMware App Volumes.

What are VMware App Volumes for? ^

Delivery of an application to virtual desktops is challenging. Many methods exist, but they are often not easy to manage or fast enough to deploy with new desktops at scale.

If you have non-persistent desktops, each time you login to your desktop, you'll receive a fresh, new desktop on demand. Applications packaged by App Volumes are delivered to your desktop at login as VMDK or VHD files.

VMware App Volumes allow a mass deployment very quickly. Demos I've seen during VMworld, when the product was at version 1.x, were simply exciting. I've seen hundreds of applications popping up as shortcuts on the desktop in just a few seconds. It was simply hard to believe. App Volumes provides close to real-time application delivery.

Applications are presented to the operating system (OS) as if they were natively installed. Yes, as you can imagine, there is a trick to doing this. Instead of installing all applications, an entire VMDK or VHDX with preinstalled applications is mounted as an additional disk, and the start menu and desktop are populated with shortcuts.

Management of the registry keys is handled by an app called App Volumes Agent, which merges the content of the application with the file system and the Windows registry.

App Volumes Manager is the main management program the administrator uses to maintain, create, and assign applications to users.

Application Inventory – This is the place where the applications are visible. You can create an application to manage a collection of related packages. Your users, groups, computers, or organizational units are then entitled to use one of the packaged versions.

Packages – As said, the packages are virtual disks that store one or more programs that are needed to run an application. You can have several versions of an application and maintain its lifecycle. In addition, you can have a single package delivered to multiple computers and users.

Application History – The application history enables you to view a list of administrative actions that the admin (or other assigned user) has executed on an application. This means you can see which admin has made a change to an app if you're using named admins.

Package Notes – Enables you to annotate and keep track of a package's details, which you might need after you have packaged your application.

Improved Template Management – There are new template policy files (snapvol.cfg) that can be updated easily when the agent is updated. App Volumes Manager also offers a better management user interface (UI), which allows you to upload and maintain templates. Lastly, VMware brought support for Windows 10, version 1909.

Compared to the previous release, the product looks more polished and has a better UI. Improved functions and speed allow a better, smoother process for maintaining the application lifecycle.

IT administrators can deliver applications and data very quickly by using VMware App Volumes 4. As mentioned, it offers near-real-time delivery as the application does not have to be installed on desktops; instead, a whole volume, whole VMDK, or VHDX disk is mounted by a special driver directly to the VM, and Start menu shortcuts are generated on the fly.

If you run a VDI environment within your organization and do not use VMware App Volumes yet, I highly encourage you to have a look. There are plenty of resources. One of them can be found here: Quick-Start Tutorial for VMware App Volumes 4 Simplified Application Management (SAM).