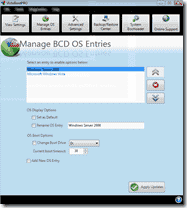 In my opinion, there are only a few things that are changed for the worse under Vista. One is the replacement of Boot.ini with the Boot Configuration Data Store (BCD Store). Perhaps using an ini file for storing the boot configuration was a bit outdated, but replacing it with the command line tool bcdedit is not really a better solution. It is even standard under Linux nowadays also to offer a GUI tool for this purpose. You can take this post as an example of why I usually try to avoid the command prompt.

Today, I had to change the boot configuration for the first time under Vista. It is a test computer where I have Vista and Windows Server 2008 installed. I wanted to replace a Vista x86 installation with Vista x64, so I deleted the corresponding partition and created a new one. After I installed Vista x64, the Windows Server 2008 installation vanished from the boot menu. That was not very smart of Vista setup, but okay, it is not a big deal to add the entry again, or so I thought. With Windows XP or Windows Server 2003, I would just have edited the boot.ini, which I had done countless times before. Thus, I thought, it shouldn’t be a big deal to use bcdedit this time. 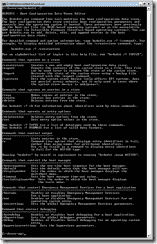 Well, after launching bcdedit /? on the command prompt, I wasn’t able to figure out immediately how to get the job done. I was in a hurry and didn’t have the nerves to study the help file, or even read the documentation to accomplish such a simple task, so I googled for GUI + Vista + boot.ini and found VistaBootPro. Search, download and installation cost me about 10 seconds. I needed another 5 seconds to add the entry of my Server 2008 installation to the boot configuration.

I described this incident in detail because I think it is a good example of the general weakness of command line tools. I have been complaining several times before about Microsoft’s new philosophy to count more on command line tools lately. It is okay to extend Windows with new commands, but this should not happen at the cost of GUI tools. Instead of ranting again against the CLI, I could have described VistaBootPro in this post. However, I think there is not much to describe; just launch it and use it.