Paul Schnackenburg  Thu, Oct 31 2013Mon, Nov 4 2013  hyper‑v, system center, virtualization  0
In the first part we covered what has been improved for networking in VMM 2012 R2, in this part we’ll look at cloud and VM enhancements.
Contents

VMM 2012 R2 picks up quite a few of the improvements in Hyper-V in Windows Server 2012 R2 such as being able to clone a running VM (for troubleshooting or forensics purposes) and the ability to resize a VHDX while the VM is online. Dynamic memory settings can be altered for a running VM and VMM fully supports differencing disks which will be especially useful for hosting companies.

VMM 2012 R2 also supports Generation 2 VMs but they can’t be part of a VMM service. As Microsoft is continually reminding us how much better it is to deploy VMs using services I really hope they’ll fix this oversight soon.

Faster Live Migrations (LM) will also be on offer if you’re using Hyper-V hosts on Windows Server 2012 R2 through the compression feature and also the capability to use RDMA network adapters for LM. 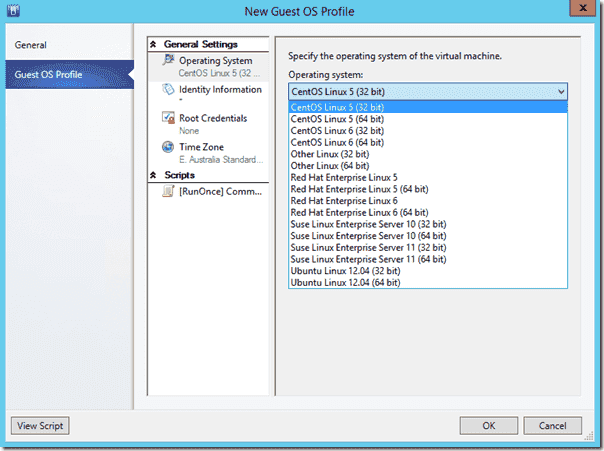 While it might be a difficult message to get out to the Linux community, Microsoft is really serious about Linux support in Hyper-V and VMM.

Linux VMs can now be customized more easily and the root password, host and DNS domain name, IP address, time zone, root SSH public key can be specified in a VM template as well as and run once commands to customize the OS upon boot. There’s also increased support for Linux VMs as part of services and Oracle Linux 5 (x86 and x64), Oracle Linux 6 (x86 and x64), and Debian GNU/Linux 7.0 (x86 and x64) can now be deployed as VMs to Hyper-V hosts. For full coverage of all the new features for Linux on Hyper-V see this article.

Services can now be deployed to XenServer hosts, in previous versions they were limited to Hyper-V and VSphere.

Remote console is a new feature for hosting companies which relies on the new Enhanced VM connect in Windows Server 2012 R2 which lets tenants connect to the console of their VMs without RDP access being available, this means you can access a VM that’s not booting properly or a Linux VM.

In VMM you can create one or more clouds that abstract the underlying fabric resources away from your self-service users; you then apportion parts of these clouds to different business units, most commonly based on SLA qualities. So you’d have a “gold” or “production” cloud on top of your best hardware and perhaps a “silver” or “development” cloud on older hardware. Each self-service user would then be assigned a user role with permissions as to what they were allowed to do in each cloud.

If your environment is totally virtualized you can now add Domain Controllers, DNS, DHCP and other management servers to VMM which will install an agent on them and have a VMM managed WSUS server keep them updated with patches.

The integration with Operations Manager has deepened and the new Cloud Health dashboards allows you to easily see the status of your cloud(s) and also lets you drill down into fabric health. There’s also forecasting built to estimate when you’ll need to add capacity to your private clouds.

For larger scale Disaster Recovery there’s the new Hyper-V Recovery Manager which is a service that runs in Windows Azure. No VM data is ever going through or being stored in Azure but it acts as a coordinating middle man between two of your datacenters. You need VMM in both locations and you need to be using Hyper-V replica to sync copies of your VMs from the primary to the secondary datacenter. If you have a major outage in location 1 you have a console from which to manage the failover including setting up batch jobs for which VMs to start up first etc. Recovery Manager also takes care of the certificate requirements on each host if you don’t have a unified AD and DNS infrastructure spanning both locations.

In the third and final part of this look at VMM 2012 R2 we’ll look at storage improvements as well as guest clustering enhancements.