Almost exactly a year later after the 2012 version, Microsoft has released the R2 update of System Center 2012. While no-one expected revolutionary changes in such a short time there’s nevertheless some useful enhancements in all of the products in the suite.

And if you’re wondering if System Center is getting the same cold reception that Windows 8 has received worldwide the answer is definitely no. I always look to the big training providers (CPLS) to see what courses they’re delivering and the biggest Microsoft training provider here in Australia has several System Center 2012 courses currently in their 10 most popular courses. That’s an indication that real businesses are implementing System Center 2012 and need to up skill their existing staff.

The big ticket item in networking is the built in site to site NVGRE gateway and to understand why this is so important we’ll need to take a step back and look at network isolation technologies.

In Hyper-V in Windows Server 2012 Microsoft introduced Network Virtualization, which subsequently was supported in VMM 2012 SP1. The idea here is that using VLANs to isolate different VMs from each other doesn’t scale very well and it’s also labor intensive as switches have to be manually updated with new VLANs.

Network Virtualization on the other hand does all the isolation using software and if properly configured on the VMM server is transparent to the underlying physical network infrastructure. But VMs don’t just need to talk to each other on their separate network, they also need to communicate with the internet and perhaps on-premises corporate networks through a VPN tunnel.

In Windows Server 2012 and VMM 2012 SP1 this gateway could be a third party network device that often came with a hefty price tag or a VM that you manually had to configure and which could only manage one tenant per gateway. 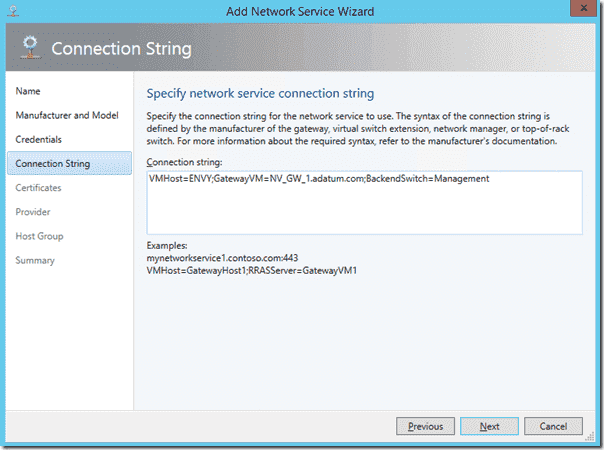 Setting up a VM to operate as a Network Virtualization and Site to Site VPN gateway is easy.

In VMM 2012 R2 there’s a built in Service Template for deploying such a gateway as a Windows Server 2012 R2 VM and all the configuration of gateway functionality is managed by VMM. This gateway is multitenant so different isolated networks can use the same gateway and if you need more capacity, multiple VMs can be added.

VMM 2012 R2 also extends its networking capabilities by supporting Open Management Infrastructure (OMI) built on the Common Information Model (CIM) for Top of Rack (TOR) switches. Arista has already announced that they’ll support it in their networking devices. With such a switch, VMM is able to identify basic port configuration and which NIC in hosts are connected to which port as well as automatically remedy configuration mistakes.

The integration with Windows Server 2012 IP Address Management (IPAM) in VMM 2012 SP1 was less than stellar with a script than exported network configuration and IP pools from VMM into IPAM. In VMM 2012 R2 this integration is much better and once configured the communication is both ways. If you create logical networks in VMM they will show up in IPAM. Or you can create logical networks and do the modelling in IPAM and these will be pushed into VMM through the integration.

A final improvement is that forwarding extensions to the Hyper-V switch such as the Cisco Nexus 1000V now works with Network Virtualization.

This article was written using the VMM 2012 R2 Preview version. In part two of this series on what’s new in VMM 2012 R2 we’ll look at enhancements to VM’s and clouds.