Jim Jones  Fri, Mar 18 2016Fri, Sep 28 2018  backup  3
Veeam released a fairly enhancement-heavy update to its free Veeam Endpoint Backup (VEB) to bring us up to version 1.5. I previously wrote about VEB when it was originally released a year ago, and while I have been very happy with the product, this update brings us some much clamored for features.
Contents

So what does it do?

If you haven't used Endpoint Backup before, it is a Windows-only image-based backup utility designed to be used for physical machines. These backups can either be sent to an external hard drive, a network share, or in a larger Veeam Backup & Replication environment, directly into a Veeam Backup Repository. These backups can then be used for file-level restore, image-based restore back to the same or similar hardware via a bootable disk or ISO, or very simply, as a poor man's physical-to-virtual tool. 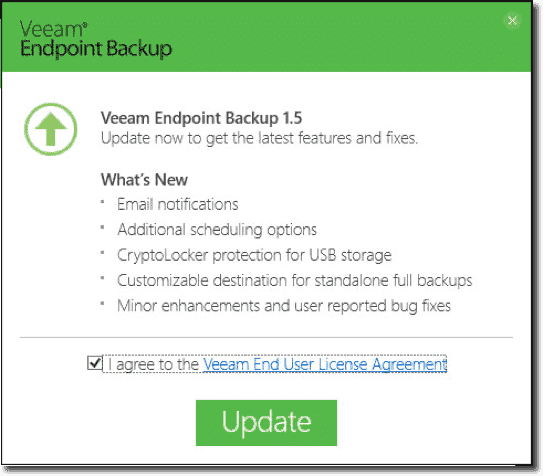 While this tool is designed and marketed towards being used for end-user laptops and desktops, it works just fine with Windows servers too. In our environment, our biggest use case for the tool is providing a fairly seamless backup solution for the handful of physical servers we still have by running jobs on a regular schedule and pointing them to a VBR repository.  System support at this point is still the same as for the original version, covering Windows 7 and later on the client side and 208 R2 and later on the server side. It is worth noting that at this point, the technical preview of Windows Server 2016 is not yet supported.

By far the biggest complaint I've heard from users I know, as well as from myself, is that there previously wasn't any kind of built-in notification system. In the end-user device space, this makes sense, but those of us using VEB with servers needed to be notified at a minimum when the job failed. In this new version, you can configure e-mail system connectivity in much the same way that you would add a new e-mail address to Outlook via auto discover, and then you can tell it when you want it to notify you of either Success, Warning, or Error, or any combination of the three. 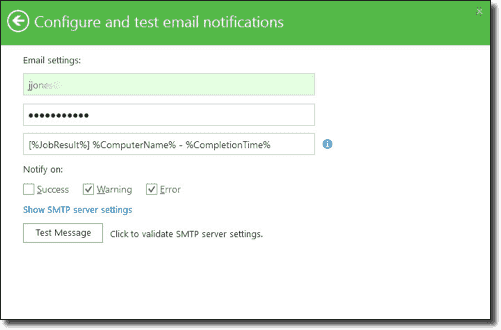 Also included in this version is an enhancement that is very handy from a security standpoint. Now, when the job completes, the tool will automatically eject the removable media if you choose to use an external USB drive as the backup location. This is important in the case of ransomware such as Cryptolocker that has been floating around, in that VEB 1.5 should protect that media from being encrypted right along with your laptop in case you get hit with the ransomware. 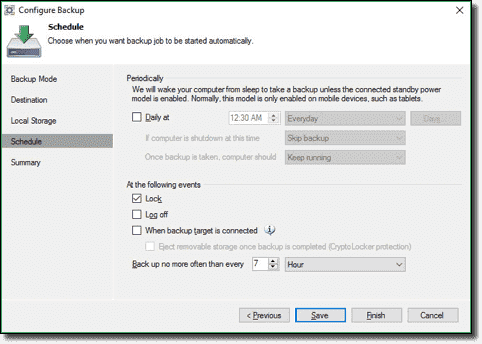 VEB 1.5 also comes with various performance increases as well. There is new logic with regard to backup file inclusion and exclusion, which is done automatically, much like the bitlooker feature in the latest version of the Veeam Backup & Replication product, as well as with regard to basic performance enhancements. In this latest version on my Surface Pro 4, when backing up to an external USB 3 hard drive, I was able to perform a 4.5 GB incremental backup in about four and a half minutes without really seeing much of a hit in overall system performance.

There have been a number of upgrades related to the scheduling and processing to deal with the realities of backup of end-user devices. This new version allows you to have it resume a missed daily backup at the earliest opportunity, and the job will automatically be suspended when the computer is running on battery. Further, we can finally choose specific days when a daily schedule is chosen, to keep the tool from failing its way through the weekend. I do still recommend that when you are backing up end-user type devices, you use the "At the following events" options for backup triggers. I like to use the "Lock" option coupled with a seven-hour schedule to tell backup to kick off when the user locks their computer. Couple this with an enterprise auto lock schedule, and it is pretty sustainable.

There are quite a few other enhancements that make this release feel like a major release even when it isn't. I will say that much like other Veeam products, the upgrade is pretty painless. I first installed this a week ago, and it has been running backups and just picked up from the earlier version without a single hiccup.

The software can be downloaded for free with registration from Veeam’s website.