Okay, here's the situation: Your IT department is on the tail end of a long physical-to-virtual (P2V) server migration. At this point, you have three hardware Hyper-V hosts, and all your infrastructure servers are running as Hyper-V VMs. 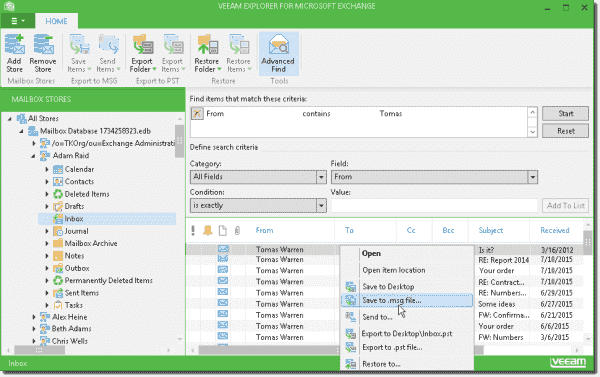 To maintain compliance with your service-level agreements (SLAs) and FCAPS, you need to choose a powerful, flexible, and easy-to-use disaster recovery solution for your environment. Easy, right?

Uh ... generally speaking, no. Especially when we consider factors such as:

Veeam Software (pronounced VEEM and sometimes misspelled as Veem) recently released version 9 of their Backup & Replication Hyper-V and VMware disaster recovery solution. In today's article, I'll start with a brief overview of the product's core features as well as what's new in v9.

Next, we'll perform a basic run-through of how to use Veeam Backup & Replication. We'll finish up with some licensing details and resources for further exploration. Let's begin!

In enterprise data backup nomenclature, the recovery time objective (RTO) describes the time within which a company can restore availability after a disaster in order to maintain its SLAs. The recovery point objective (RPO) is the maximum accepted time period for which data can be lost during and after a disaster.

Veeam Software trademarked the metric RTPO, which is a portmanteau of RTO and RPO. Specifically, Veeam claims their Backup & Replication provides an RTPO of less than 15 minutes for all applications and data protected by the solution.

We can look at Veeam Backup & Recovery as a backup, recovery, and replication platform for Hyper-V as well as VMware virtual machines. Here are some additional details concerning those three cornerstones:

Another new feature of v9 is BitLooker. BitLooker (not to be confused with Microsoft BitLocker) is a proprietary data deduplication solution. By excluding deleted file blocks, swap files, hibernation files, and user-specified files and folders from your VM backup images, by definition, you're reducing your storage footprint.

Here's a quick punch list of some other new Backup & Replication features of v9. Please read Veeam's What's New in v9 whitepaper to get a full rundown:

The best way to get a feel for how Veeam Backup & Replication v9 works is to download a free 30-day Enterprise Plus edition trial. The installer weighs in at 1.2 GB, and you'll also be given a tiny license file to activate the software.

Understand: Veeam Backup & Replication is actually a HUGE product with a staggering feature set. To that point, Veeam actually developed a Veeam Certified Engineer (VMCE) certification, if you're interested. Today, I'll walk you through a basic product demo.

In a nutshell, standing up a VM backup infrastructure involves the following steps:

You can install the Backup Server role on any domain or workgroup server running Windows Server 2008 R2 SP1 or later. The product isn't supported on Server Core, but you can use a Server Core box as a backup proxy. The proxy role is cool because it reduces the system impact on virtualization hosts that are actually being backed up.

Check out the formal system requirements at your leisure, but they aren't steep for this Windows-based SQL Server database-backed enterprise application. As you can see from the following screenshot, the Veeam Backup & Replication installer automatically can install any missing dependencies on your backup server. 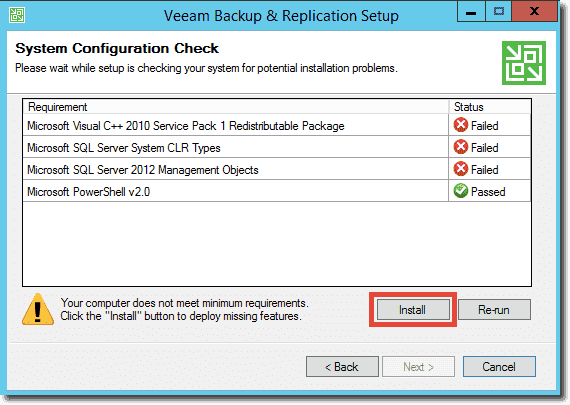 The product installer automatically handles dependences for you

The product installer automatically handles dependences for you.

With regard to the SQL Server database, you can either point the Veeam Backup & Replication installer at a full SQL Server instance or let the installer apply a SQL Server Express Edition instance.

Also, you'll need to have at least one copy of the Veeam Backup & Replication Console installed; this doesn't have to be on the backup server. Veeam's really considerate about firewall rules; you can customize the ports that the software uses for its services.

After installation, fire up the Backup & Replication console (which listens by default on TCP port 9392), log in as an administrator, switch to the Backup Infrastructure node, and finally navigate to the Server tab. Click Add Server and you'll be walked through the process of importing your Hyper-V and/or VMware vSphere/ESXi virtualization hosts into Veeam. You can see this interface in the next screenshot. 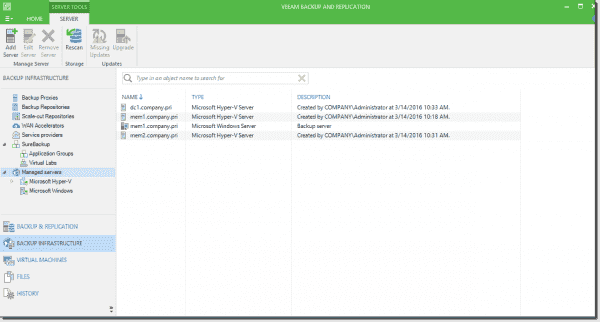 Here we see all our managed virtualization hosts

You can define a standard backup repository using any of the following targets:

Now head over to the Backup & Replication node and click Backup Job to create and schedule your first VM backup job. Doing so involves the following steps:

Selecting a backup job from the list gives you a lot of useful metadata. Check it out in the following screenshot: 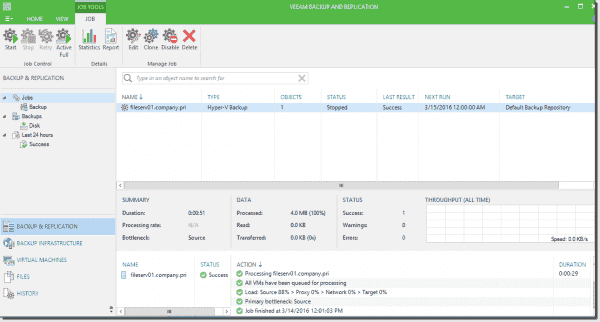 Creating a replication job is basically the same. Here are the "big picture" steps:

Finally, performing a restore is equally intuitive. On the Home tab, select Restore to start the wizard. As you can see from the upcoming interface screenshot, you can (a) restore from a backup or an online replica; and (b) restore entire VMs, individual VM files, or individual guest OS files. Awesome!

Let me tell you: Veeam Backup & Replication is a HUGE product. It even includes a fully documented PowerShell module (technically a snap-in). Open an elevated PowerShell console and run the following commands on your Veeam management host to see what's possible:

For licensing details, in-person walkthroughs, and pricing quotes, you should contact Veeam in one of the following ways:

I'll leave you with a few hand-selected resources to help you deep-dive further into Veeam Backup & Replication.