Brandon Lee  Thu, Feb 27 2020Tue, May 12 2020  backup, virtualization  0
Veeam Backup & Replication v10 was released to the public. In this review of its many new features, we will take a look at key new features that make this the most powerful Veeam release to date.

If you have been in the enterprise space for any amount of time, no doubt you have heard about Veeam Backup & Replication. They have been one of the major players in the backup and recovery space for quite some time now.

Veeam Backup & Replication v10 has been a highly anticipated release since Veeam started teasing features and functionality to be included back in 2017. The new version was released to the public on February 18, 2020. While there are over 150 new features contained in v10, there are a few key features we want to focus on. These include:

Let's look at each of these new Veeam Backup & Replication v10 features one-by-one.

One of the first great features of the new Veeam Backup & Replication v10 release is NAS Backup. The NAS Backup feature can back up file shares, including SMB, NFS, Windows file servers, Linux file servers, and others.

It is interesting to note that Veeam has not simply taken the route of using the NDMP protocol. NDMP, or Network Data Management Protocol, is an open standard that has been around for quite some time. It is designed for network-based backup for network attached storage. However, NDMP has many limitations, including the ability to restore only to the same type of hardware device from which the backup was taken.

Veeam has integrated many great features as part of the NAS Backup feature, including what they refer to as Changed File Tracking. This is analogous to the Changed Block Tracking used in backing up VMware virtual machines. Only the information that is changed is backed up.

On the first backup, Veeam Backup & Replication v10 takes a full backup. However, on each subsequent iteration, an extremely fast incremental backup is taken of the file system. Another aspect of the NAS Backup is the Quick Rollback feature, which compares the differential of the data that currently exists and the data that exists in the last good backup and uses the delta between the two to quickly restore your environment to a known good state. This feature is going to be extremely powerful for ransomware attacks and other situations where file data needs to be restored quickly. 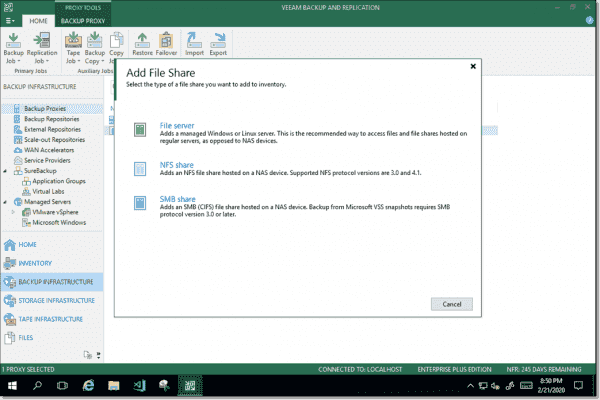 Instant VM Recovery is one of those features that is meant to help get your environment up and running as quickly as possible after a disaster. With Instant VM Recovery, you are booting your VMs from your backup repository itself. One of the great enhancements with this feature is the ability to perform multiple instant VM recoveries at once. This allows simultaneously restoring multiple VMs as needed.

This is a great feature, especially if you have multiple VMs that may be required to recover a business-critical application. Having the ability to recover them simultaneously is a welcome enhancement. 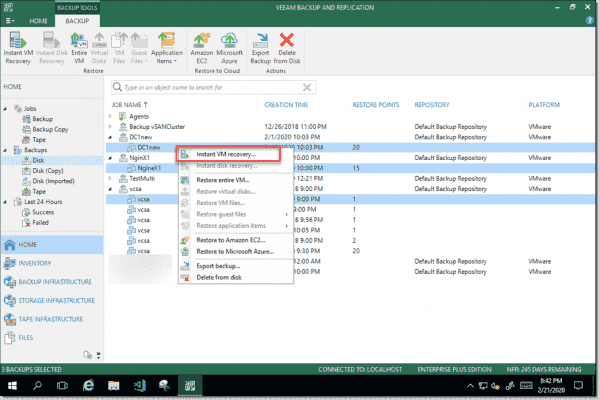 Cloud Tier is a feature that was added to the Scale Out Backup Repository (SOBR) capability that allows customers to take advantage of low-cost object storage by way of Amazon S3 or Azure blob storage. With Cloud Tier, your "performance tier" is your on-premises repository, and the "capacity-tier" is made up of cloud-based object storage.

If the offload policy is enabled along with Copy mode, data is copied immediately with Copy mode and then offloaded based on the policy. Veeam applies intelligence here, however, in that it doesn't recopy the data that has already been copied; it simply changes the pointer to back up in the cloud. 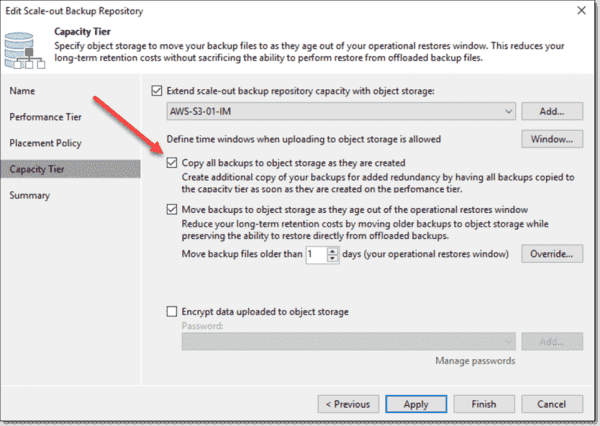 A new Immutability feature protects against data loss as a result of malicious intent, as in the case of ransomware. Using the Amazon S3 object lock feature, Veeam backups in v10 are protected against deletion for the number of days defined in the policy setting.

Using new mount options, if you have a disaster on-premises that has taken out your Veeam server, you can simply spin up a free community edition, import the object storage repository, import the restore points of the backups into the memory of the VBR server, and stream the restores from object storage.

It has been a long time coming for Veeam customers who have long yearned to use Linux backup proxies instead of Windows Servers. Now, with Veeam Backup & Replication v10, you can use Linux as a backup proxy for your environment. This has a number of advantages in terms of both footprint and licensing. The typical footprint of a Linux server is much smaller than a Windows Server. Customers will benefit by being able to use much leaner backup proxies that are configured using Linux servers in their environments.

Additionally, Windows Server license costs are not insignificant. In larger environments, making use of several Windows Servers as Veeam backup proxies can add up from a licensing perspective. As you can see below, in Veeam Backup & Replication v10, you now have the option to add backup proxies that run on Linux servers. 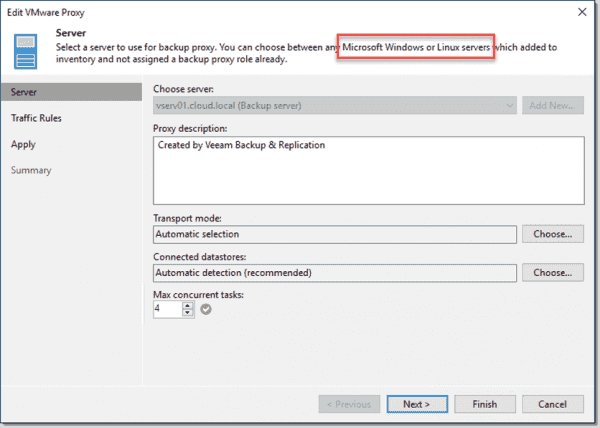 A very interesting new feature in Veeam Backup & Replication v10 is called Data Integration API. Using this data integration API, you can now use backup data that is sitting around in your backup repository for other purposes, such as:

With the Veeam data integration API, third-party vendors can have the actual data of the VM disks presented to them such that they can use that data to provide real value to your business. Data classification and eDiscovery are two great examples of use cases for this new feature.

Using PowerShell, Veeam can work with the API and mount any virtual disk from any virtual machine. You can use all your backups as data sources for ingesting by a third party at the same time, if you want. There is no limit to the amount of data you can mount in this way.

The Veeam Backup & Replication v10 release is a huge new release in terms of the features and capabilities it offers. Veeam is certainly a leader in the data protection space, and v10 helps to solidify and improve upon their position among competitors.

Veeam has expanded its capabilities in v10 to include enhanced performance, better cloud capabilities, better protection against ransomware, and even more value to your data contained in backups.

With Veeam community edition, you can use and test these features without any functionality limits, up to 10 workloads. This can be any combination of VMs, cloud instances, physical servers, or workstations.