Vladan Seget  Mon, Sep 21 2020Mon, Sep 21 2020  virtualization, vmware  0
VMware has recently announced a new exam based on vSphere 7. You can become a VMware Certified Professional on vSphere 7 by passing a certification exam with exam code 2V0-21.20. The whole exam blueprint has 80 chapters. The exam has 70 questions, and you have 115 minutes. The passing score is 300.

If you successfully pass the VCP7 exam, you automatically receive VCP-DCV 2020 certification without needing to pass the smaller "foundation" exam first (requirements for VCP6.7-DCV).

In fact, the official VMware name for the certification title is not VCP7-DCV, as one would expect, but VMware Certified Professional—Data Center Virtualization 2020 (VCP-DCV 2020). The number increments each year. This change has been here for the past year or two, but IT admins keep calling the exam VCP7-DCV.

To succeed on the exam, you should not rely only on this study guide. You should read the docs as well. We won't be able to cover everything. There is a full documentation set recommended for the exam. The VMware exam blueprint has 80 chapters (objectives). VCP-DCV 2020 certification is the latest certification based on vSphere 7.0.

VMware vSphere high availability (HA) is able to protect virtual machines (VMs) during hardware failures. If you have a VMware vSphere cluster configured and you activate HA, then if any of your hosts has a hardware problem, the VMs running on that host will be restarted automatically on the remaining hosts in the cluster.

vSphere HA can also protect against application failure by continuously monitoring a virtual machine and resetting it in the event a failure is detected.

If you have a datastore problem, vSphere HA protects against datastore accessibility failures by restarting affected virtual machines on other hosts that still have access to their datastores. 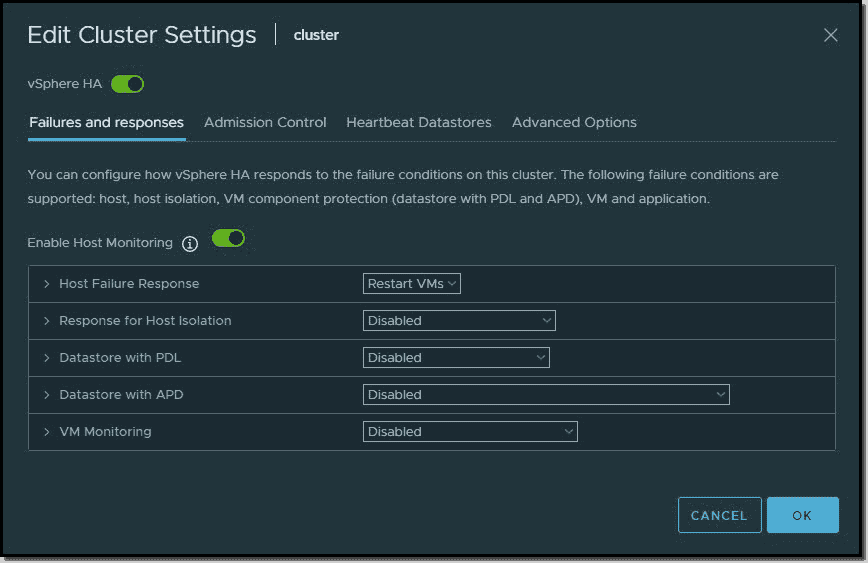 vSphere HA has another capability that can protect virtual machines against network isolation by restarting them if their host becomes isolated.

You do not need to install special software in the application or virtual machine. All workloads are automatically protected by vSphere HA. After vSphere HA is configured, no actions are required to protect new VMs.

You can activate vSphere HA by selecting the cluster, and then selecting Configure > vSphere Availability > Edit.

Where to configure vSphere HA

When you activate vSphere HA, there are a couple of things going on in the background. The HA agent is installed on each host in the cluster. The agents can communicate with each other.

It monitors both network and shared datastores, so it basically double-checks that there is some kind of problem with one of the secondary hosts. It then triggers an HA event, and VMs that were running on the failed secondary hosts are restarted on other hosts in the cluster.

When there is a failure, the HA must know what to do. We can configure different options in the case of host failure. Many failure conditions are supported, including host failure, host isolation, VM component protection (datastore with PDL and APD), VM, and application. The different configuration options and settings are available through the Failures and Responses tab via the drop-down lists. Then there are check boxes for each option. For the case of datastore Permanent Device Loss (PDL) or All Paths Down (APD), check with your hardware manufacturer to see whether those options are supported. 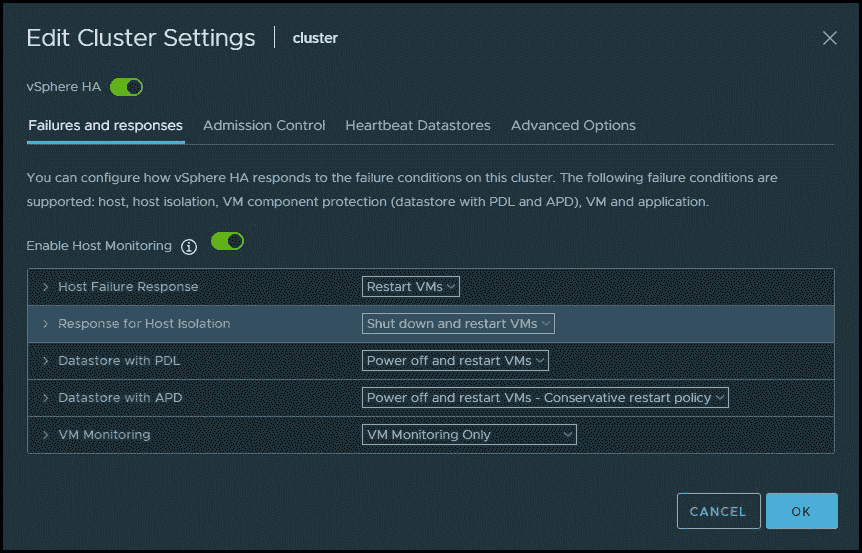 What is vSphere admission control? It is a configuration policy that enables ensuring that vSphere has enough failover capacity in the cluster. By default, a cluster can tolerate one host failure at a time. The maximum is one less the number of hosts in the cluster.

So, for example, you have a cluster with five hosts. You can set the maximum number of host failures to 4. 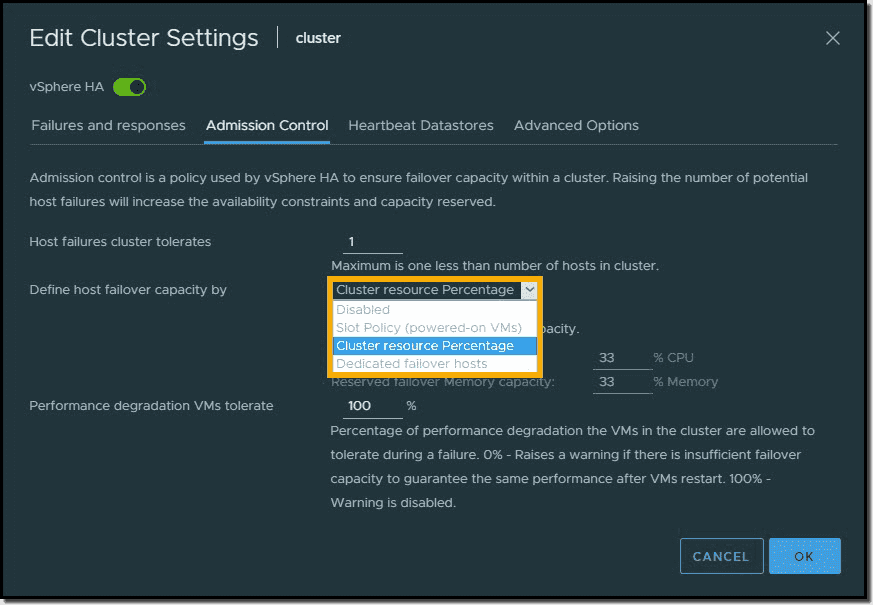 You can define the host failover capacity by:

Cluster resource percentage—This takes into account a specified percentage of aggregate CPU and memory resources that are reserved for failover.

Slot policy admission control—vSphere HA admission control makes sure that host(s) can fail and there are still sufficient resources in the cluster to failover all the VMs from those hosts.

Dedicated failover hosts—This policy is the least efficient. It reserves host(s) as "spare" host(s). No VMs can run on them because they are used only if an HA event is triggered.

vSphere HA works with other features, such as VMware vSAN or Distributed Resources Scheduler (DRS).

If you are using vSphere HA with vSAN, the pooled vSAN datastore and its separated network traffic are used to detect HA failure. There is only one small issue: you must disable HA to activate VMware vSAN. And vice versa: you can enable vSAN only if vSphere HA is disabled. 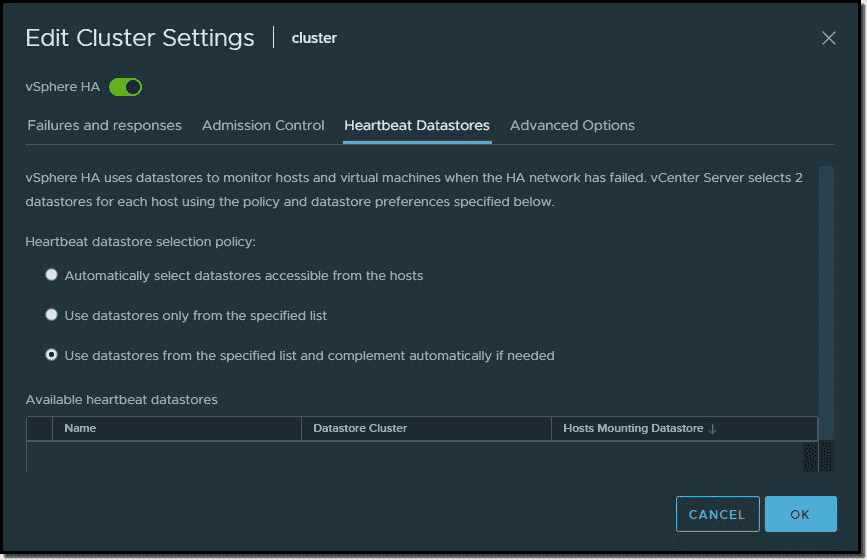 Be sure to consult other documentation when studying for the exam. VMware vSphere is a large topic that is impossible to squeeze into a single blog post. Check the VCP-DCV 2020 Study Guide at the ESX Virtualization blog for other objectives.