VMware Instant Clone architecture was started via Project Fargo during VMworld 2016 and slowly made it into the VMware Horizon Desktop architecture as a complementary and innovative cloning technology that is faster and more efficient than traditional cloning via VMware composer.

The first instant clone architecture release was with vSphere 6.7 but did not enable creating clones via the user interface. They could only be created through PowerCLI or API and via the Horizon VDI.

Instant clones use a copy-on-write architecture similar to that of containers, which means that when an application running in a child VM tries to change a shared OS file, a copy of the shared file is created and stored in the child VM.

All modifications inside the VM are isolated within this VM only. If there are some new files created within that particular VM, those files are also saved within the VM and, as such, are also stored in the child VM and not in the parent.

Master VM: Golden image of your OS, patched, and its applications installed. Once finalized, create a VM snapshot.

Internal Template VM: When creating a desktop pool, Horizon creates a template, which is a linked clone VM from your golden image.

Replica: The same as a linked clone replica. It is a thin provisioned full clone of the template VM. It will be used for read access for all the instant clone desktops.

Parent VM: The final copy of the original VM that will be used to "fork" (to clone) the running VMs. Parent VM exists on each ESXi host within the horizon cluster. This VM is a running VM, as we're creating instant clones from running VMs.

Instant Clones VM: The final product, a running VM based on the provisioning configuration. It can be provisioned on demand because its creation takes just a couple of seconds. 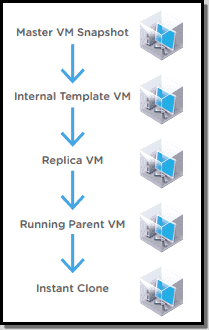 One of the most obvious use cases for Instant Clone technology is virtual desktop infrastructure (VDI) desktops. Administrators can quickly provision from a parent virtual machine whenever new desktops are needed.

Instant clones are also accessible via PowerCLI extensions. Extensions give PowerCLI admins access to this technology and create linked clones within VMware vSphere, without an installation of Horizon View. Instant Clone uses a private API so admins can use PowerCLI cmdlets to explore this technology.

Note: Just a side note here. It's not possible to use traditional clones and instant clones side by side. It is one or the other.

No need to maintain: When a user logs out of the desktop, that desktop always gets deleted and recreated as a fresh image from the latest patch. The admin only needs to maintain the master image patched and updated. This eliminates many previous operations that every Horizon admin knew—refreshing, recomposing, and rebalancing desktops after the master image was patched.

No need for a database: When traditional clones were used via View Composer, a database was required, which was usually installed on a separate VM. This component is completely eliminated from the linked clone's architecture. Less maintenance, fewer updates, less work.

Speed: Instant clones are fast. During testing, VMware realized that the average time to create a new VM via Instant Clone was about 10 times shorter. For example, to create a new desktop pool of 1000 VMs, compared to 170 min via traditional desktop clone technology, the instant-clone technology took only 25 min to create the same number of desktops.

How to set up Instant Clones in VMware Horizon View? ^

The Instant Clones are easy to set up. Instant Clones are created in a powered-on state. The desktops are ready for users to connect to. Part of the initial workflow is also guest customization and joining the Active Directory domain.

There are two main phases:

First, create the parent VM and install an operating system (Windows 7 or Windows 10). Optimize your system image following best practices and activate with a volume license key. Then install VMware Tools. Install the Horizon Agent and select the Instant Clone component. Install any applications and any system updates you wish. Then shut down the parent VM and take a snapshot. Give the snapshot a meaningful name. 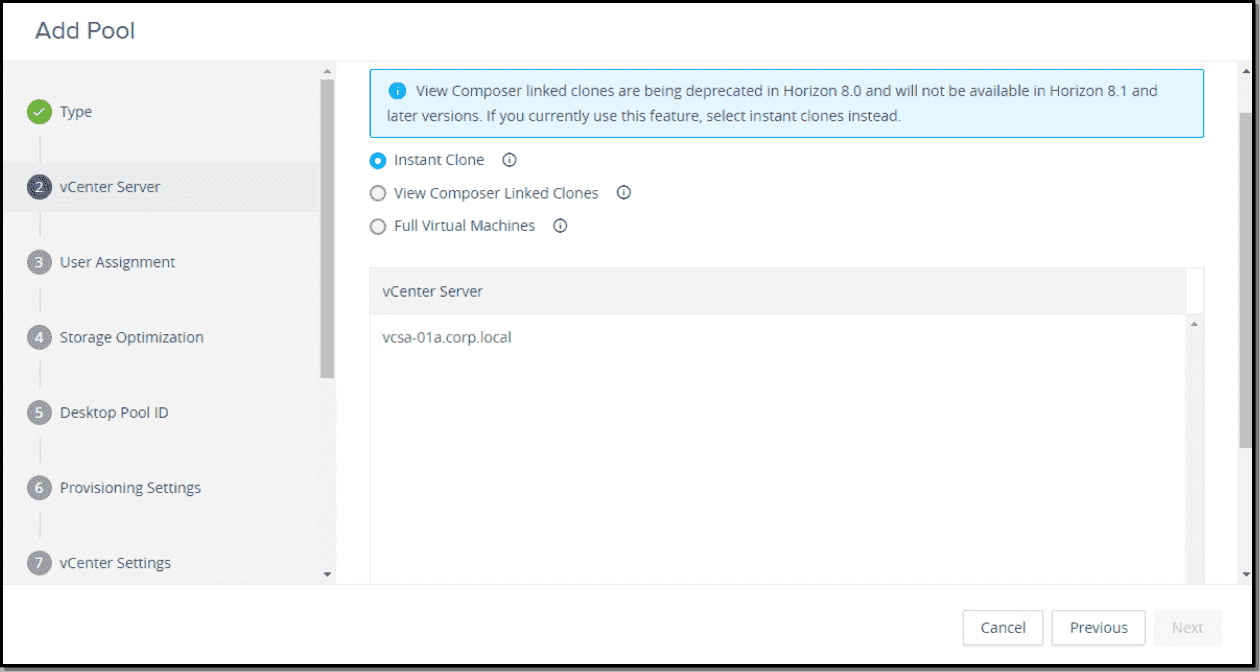 Select your vCenter Server and click Next. Select Floating and click Next. Then continue the wizard to configure all the other required steps. We won't detail those steps here.

At the end, you should have your instant desktop pool available with the required number of desktops running.

The final result of an Instant Clone operation is basically a VM (called destination VM), which has the processor state, virtual device state, memory state, and disk state identical to those of the source VM.

The virtual hardware of the VMs, including the MAC addresses or a serial port configuration, can be customized during the cloning process.