Vladan Seget  Mon, May 6 2019Fri, May 24 2019  virtualization, vmware  2
The vSphere 6.7 Update 2 (U2) announcement hasn't really surprised many, but some major changes are here. We'll look at some architectural improvements that might affect your deployment or architecture plans, but we'll also highlight some new features added to vCenter Server.

One of the first announcements that caught my attention was the fact that VMware is phasing out external Platform Services Controller (PSC) deployments. And as such, 6.7 U2 is the last version where you'll be able to choose and deploy an external PSC when you deploy vCenter Server.

However, you'll see a warning message that will inform you there will be no support for this architecture in the next major release of VMware vSphere. 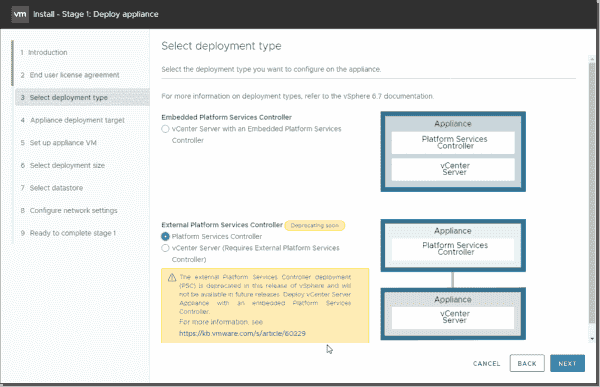 You can use an embedded PSC and still benefit from Enhanced Linked Mode (ELM), which lets you link up to 15 vCenter Server instances in the embedded PSC topology.

This wasn't previously possible; you had to have an external PSC to use ELM. This greatly simplifies the overall architecture by eliminating the need for load balancers.

Earlier, 6.7 U1 introduced a vCenter Converge Tool with a command-line interface (CLI). When you have PSC separate from vCenter in an external deployment, the PSC runs on a separate node (on a separate VM).

The 6.2 U2 provides a user interface (UI) that lets you converge your vCenter Server with an external PSC into an embedded architecture. VMware calls it a table view or topology view where you can see all vCenter Servers and PSCs. You can also identify the replication partners within this view.

And after doing the convergence, you can also decommission the old PSCs from the same UI. Select the PSC to decommission and click Decommission PSC to unregister the external node from its vCenter Server. Once decommissioned, the PSC powers down automatically.

The UI does exactly the same as the CLI tool.

The 6.7 U2 pushes this even further by grouping these alarms into four categories:

As VMware introduces more and more health checks, it will keep things more organized, as shown in the screenshot below.

When 6.71 U1 introduced storing VM template (VMX) files, we thought this was it. VMware has put a final piece in the content library. There is nothing more to improve. But yes, there is.

The 6.7 U2 has brought the possibility of syncing native VM templates between content libraries when you have an architecture with vCenter Server ELM or Hybrid Linked Mode (HLM).

This way, you don't have to create your VM templates three times if you're running let say three vCenter Servers in ELM.

Note: The difference between ELM and HLM is simple. HLM lets you link your VMware Cloud on an AWS vCenter Server instance with an on-premises vCenter Single Sign-On domain. ELM is only for local vCenter Servers (not those on AWS).

You have a new Publish button letting you sync the local library to selected subscription libraries.

Recently, you can capture a code by activating a red record button at the top. After you finish the actions you want to do via the GUI, you hit the red button again to stop the capture. This takes you to the code capture window and then shows you the code generated when you perform the action through the GUI. It generates PowerCLI code easily reusable as a PowerCLI script.

Another feature added to the Developer Center is API Explorer. This 6.7 U2 brings API Explorer into the vSphere Client where previously you had to enter an extra authentication before you could interact with the representational state transfer (REST) APIs.

Now you can do actions in a single step whereas previously you needed to pass through two windows. You can now do Attach, Check Compliance, and Remediate actions all from one screen.

Further improvements let you view more details of an ESXi Image within vSphere Update Manager (VUM). You can now see the Name, Version, Vendor, Acceptance Level, and other attributes for all packages included in the selected image.

With the 6.7 U2, the VMware vSphere architecture is evolving, and the next major release of vSphere will no longer let you install external PSCs. VMware has deprecated this architecture. For now, you can still deploy external PSCs, but the onscreen message tells you about the deprecation.

More features added in every vSphere release, even minor ones, make this platform compatible with latest Microsoft operating systems, such as Windows Server 2019.

Leave a reply to Vladan Seget (Rank: 3)
Click here to cancel the reply