So you’re a VMware shop but recent advancements in Hyper-V caught your attention or perhaps the attention of the CIO with a shrinking budget looking to see if Hyper-V is indeed cheaper? Either way you need a way to test Hyper-V and see if it’s as good as people say; this is where the Microsoft Virtual Machine Converter Solution Accelerator (MVMC) can come into the picture.

This free tool can be run on a workstation or a server (“conversion host”) and lets you point to a vCenter, Esx or Esxi host, enumerate the VMs on that / those hosts and pick one for conversion to Hyper-V. The tool will first take a snapshot, uninstall the VMware Tools, then copy the VMDK file(s) to the conversion machine and then convert these to VHD file(s) and finally create a new VM with the same configuration as the source VM and host this on the selected Hyper-V host. 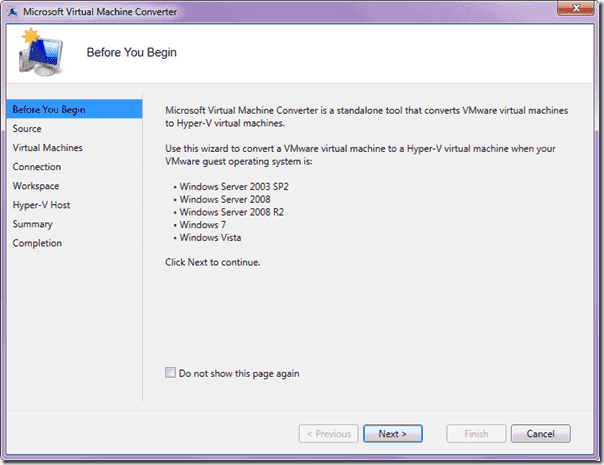 Tag: If you want to get your feet wet with Hyper-V and would like to take a few of your vSphere VMs for a spin, MVMC is a really easy tool to get started with.

This is a supported tool from Microsoft with both a GUI and command line interface, supporting vSphere 4.1 and 5.0 hosts. It also works with vSPhere 4.0 hosts if they’re managed by vCenter 4.1 or 5.0; target Hyper-V hosts can run Windows Server 2012 / 2008 R2 SP1 or Hyper-V Server 2012 / 08 R2 SP1. Supported guest OSs are Windows Server 2003 SP2 x86 / x84 and later along with Vista x86/x64 and later. Note that at the time of writing Windows 8 and Server 2012 are not supported as VMs as they haven’t completed the Windows Server Virtualization Validation Program.

MVMC is a cold migration tool, requiring VMs to be turned off during the migration as opposed to warm migration tools, see below. At the end of the wizard you can define the state of both the source and the new VM, off or running (having them both running is not a good idea if they’re on the same network). Most VMware disk types are supported apart from raw (Raw Device Mapping) disks.

Because the tool takes a snapshot before uninstalling the VMware tools and also restores the VM to this state when the source disks are successfully copied to the conversion host it leaves the VM in a pristine state, ready to be turned on if needed. 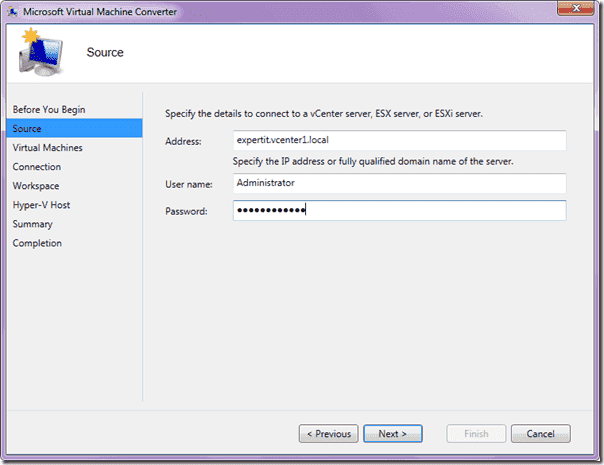 You can point MVMC to either an Esx hosts or your vCenter management machine.

Before you start a migration project it’s really good to know where you are and the free Microsoft Assessment and Planning Toolkit (MAP) lets you inventory your existing environment (without agents) including checking the suitability of your vSphere VMs to be converted to Hyper-V.

MVMC works well if you want to migrate a few VMs to a test lab and play with them or if you only have handfuls of VMs. If you’re serious about converting a large number of VMs though you should have a look at MVMC Automation Toolkit (MAT) which acts a wrapper around MVMC to automate a large migration. MAT requires a SQL server (can be SQL Express), it can do three VMs in parallel (MVMC on its own does only one VM at a time) and if you want even more VMs done simultaneously you can add helper machines that can each do three VMs.

If you already have System Center components in your environment; Virtual Machine Manager will let you do a V2V but only if you have added your vCenter environment to VMM. This method will not automatically uninstall the VMware Tools; something that’s not trivial but it will attempt to configure the destination VM to not start the VMware Tools services. If VMM isn’t managing vCenter there’s the option of doing a P2V of the VM which I’ve had great success with.

There are also third party tools: 5nine offers the free V2V Easy Converter and Vision Solutions has Double-Take Move which provides warm migrations where the VM is only down for a very short time. If you happen to have Net App storage they offer a PowerShell script (in ONTAP 2.3+) that will convert VMs directly on the storage array, taking the time from converting a VM from many minutes to seconds and not requiring any extra disk space.

MVMC is a capable tool that’s easy to use and does what it says on the tin; for larger or time restrained migrations MAT might be the way to go unless your budget can stretch to a third party tool.