Microsoft PowerShell is arguably the most powerful scripting language for automating configuration, management, and other Microsoft workstation and server functions. It programmatically lets system administrators do just about any function they would normally perform from the GUI. This gives administrators a powerful tool to use in mass configuring both Windows workstations and server deployments.

However, some challenges hinder implementing remote PowerShell administration from scratch and interacting with Windows workstations and servers. These could include learning the ability to iterate through a group of workstation or server resources to make changes or configuration updates manually, logging the operations, and other operations. By using Windows PowerShell with Ansible, we benefit from Ansible for automation and the power of PowerShell control for Windows resources.

Advantages of using PowerShell with Ansible ^

Several advantages come to mind when using PowerShell with Ansible. Ansible is a configuration management and orchestration platform that allows organizing resources intelligently, defining roles, as well as writing "playbooks" that build what the server role should look like. Additionally, for those unaware, the win_modules for Ansible typically aim to interact with PowerShell through the Ansible Python interface in the backend when communicating with the Windows Server.

For enterprise users who want to step up to the Ansible Tower solution, you get a graphical interface for controlling Windows Server configuration management and the benefits of scheduling playbooks and notifications. It also provides really nice Git integration to synchronize changes to all aspects of the environment. Ansible Tower is a paid product, however, in its unlimited form. You can run Ansible Tower free for up to 10 managed nodes, which is great for a home lab or test environment. 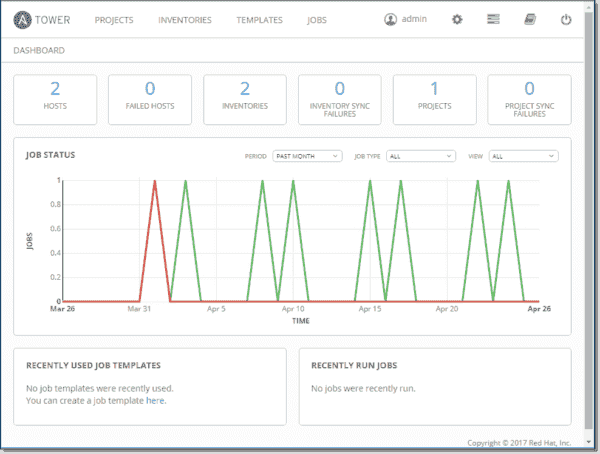 Special Ansible Windows modules allow running PowerShell commands on target Windows Servers. The modules you will primarily use when working with PowerShell using Ansible are the win_commandmodule and the win_shellmodule.

Getting up and running with Ansible is as simple as:

Using the templates shown above, you can easily run a playbook against your web servers using the following Ansible command:

Using the syntax above for our Windows Server playbook to run PowerShell scripts via the win_commandmodule, we can easily run scripts on remote Windows Servers. Below, as an example, we are running a PowerShell script to set network level authentication on RDP. As you can see, the changedvalue is true, indicating implementation of the changes from the PowerShell script. I ran the Ansible script below with debugging turned on so we can see the actual script as it runs: 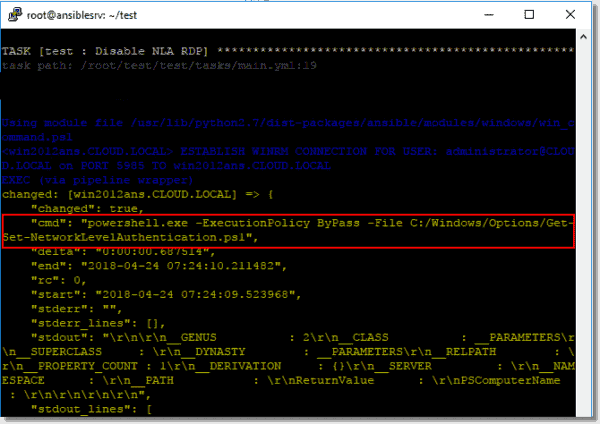 Running a PowerShell script with the Ansible win command module

Ansible notifies us at the end of running a playbook how many changes it implemented (designated in yellow).

Finished Ansible playbook noting the changes to the server

Shown below is the output of the Ansible playbook. 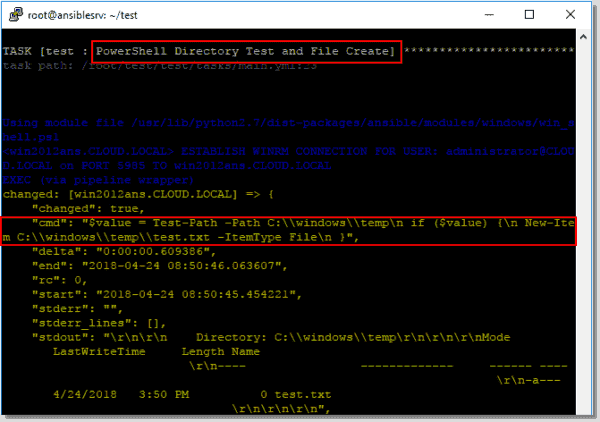 You may ask the question: how do you get PowerShell scripts to a target Windows Server if you want to run the script via either the win_command or win_shell module? We can use another Ansible module called win_copy that allows copying files either from the local Ansible server or from a remote share.

You could use the following code in an Ansible playbook to copy a PowerShell script housed in a localAnsible server folder (root/test/resources as in the example). The remote_srcdirective tells Ansible whether the file source is local or remote.

In the next stanza of the YML file for the playbook, you can then use the location of the PowerShell script above to execute it via the win_commandmodule.

Using Windows PowerShell with Ansible is a great way to interact with Windows Servers remotely using PowerShell configuration. Ansible is an easy configuration management platform to provision. It can let you get up to speed quickly with provisioning changes in a Windows Server environment. The Ansible framework gives you all the advantages that come with the product. It provides Git integration as well as the ability to use Ansible Tower, which allows additional functionality such as scheduling and notifications.

Using the win_command, win_shell, and win_copymodules, Ansible lets you interact with PowerShell very easily and predictably on remote Windows Servers. You can use PowerShell on its own for remote configuration. However, Ansible allows orchestrating the process of PowerShell configuration, especially when building upon the Ansible concepts of roles and tasks while building playbooks.