Kyle Beckman  Tue, Nov 3 2015Tue, Nov 3 2015  hyper‑v, powershell, virtualization, windows 10  0
Hyper-V in Windows 10 has a number of new features, including PowerShell Direct, hot add/remove of memory and network adapters, Linux Secure Boot, and down-level management of Hyper-V on older operating systems. In this article, I’ll cover how to use these new features in Hyper-V for Windows 10.

As an IT pro and a blogger, I spend a lot of time testing things such as new builds of Windows 10 and Windows Server, new configurations, building software deployments, and more. Hyper-V is an invaluable tool for allowing me to do that without impacting my production computer and servers that need to work reliably. Windows 10 improves on Windows 10 client Hyper-V even more.

PowerShell Direct allows the Hyper-V host administrator to run PowerShell commands directly against VMs running on the Hyper-V host. This eliminates the need to have direct network access to the VM, which can come in really handy if your host server or management station on a different VLAN than the virtual machines you’re managing. You will need an account that has access to the virtual machine as well as Admin rights or delegated permissions to run PowerShell commands.

You can run the following command to enter a remote PowerShell session on the VM:

You can also use the following command if you need to run something longer or don’t need an interactive login:

Linux operating systems can now take advantage of secure boot in Generation 2 VMs in Hyper-V on Windows 10. Both SUSE Linux Enterprise Server 12 and Ubuntu 14.04 (and later) are currently supported, but more will follow over time. The VM must be configured to use the Microsoft UEFI Certificate Authority (CA) before it is booted. You can configure it by running the following PowerShell command:

Generation 2 VMs now support hot add/remove of network adapters. The “hot” change allows you to add or remove the NIC without needing to shut down or reboot the VM and is supported for both Windows and Linux VMs.

Memory can also be modified in running VMs for both Generation 1 and Generation 2 VMs.

In Windows 10, you can now make checkpoints that are data-consistent and use the built-in backup technology in the OS. This allows you to make what are called production checkpoints that don’t include information from running applications so that, when you restore a checkpoint, applications don’t have unexpected behaviors. 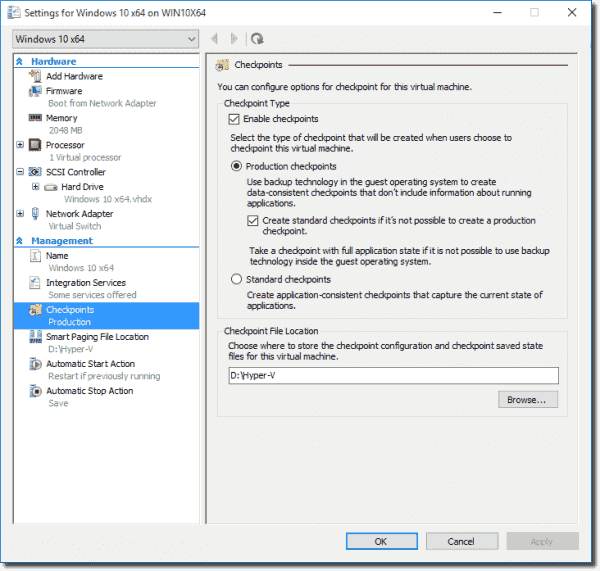 Integration Components have always been a huge pain point when upgrading Hyper-V host servers. When a new version of Hyper-V is released, the Integration Components (which contain all of the device drivers for the virtual hardware) need to be updated to the latest version. In many larger corporate environments, Hyper-V host servers and virtual machines don’t always have the same administrators. The Integration Components, which are delivered as an ISO image (vmguest.iso), had to be mounted and installed on each VM. Even if you did make a copy of the files and put them on a network share, the process still required a reboot and downtime.

The Virtual Machine Boot Summary is a feature I stumbled upon completely by mistake. I haven’t seen it in any official documentation or presentations yet. When a VM has issues booting, the Virtual Machine Boot Summary is displayed to assist you in troubleshooting the issue. In the case of the screenshot below, I have a new Generation 2 VM that hasn’t had an OS loaded yet. When I attempted to PXE boot it, the PXE boot failed because the network was disconnected in the VM. 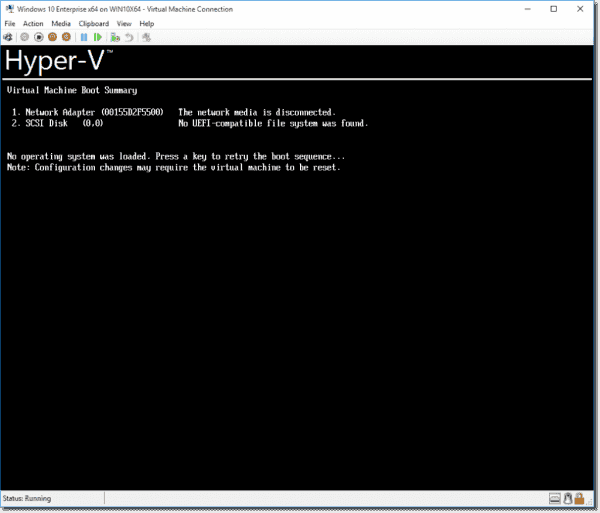