Using Invoke-VMScript for running remote scripts on VMs with PowerCLI

Dan Franciscus  Mon, Jul 2 2018Mon, Jul 2 2018  powershell, virtualization, vmware  3
Invoke-VMScript allows you to run PowerShell, batch, and Bash scripts on remote VMware virtual machines from PowerShell. Not only that but since you are actually authenticating to vCenter or ESXi, it does not require network connectivity to the server you want to run the script on.

Dan Franciscus is a systems engineer and VMware Certified Professional (VCP) specializing in VMware, PowerShell, and other Microsoft-based technologies. You can reach Dan at his blog or his Twitter at @dan_franciscus.

VMware has long supported the use of PowerShell for managing vSphere via PowerCLI. As a VMware Certified Professional (VCP) and PowerShell enthusiast, I have found this to be a great method for managing my own vSphere environments as well. In terms of remoting into my VMware virtual machines (VMs), I typically log in to them the same way I log in to other physical servers via PowerShell remoting.

With that said, there have been instances when I lose network connectivity to a VM. For those cases, Invoke-VMScript, a cmdlet from the PowerCLI module, is a great tool to use. As long as port 902 on the ESXi host is open and the VM has VMware tools installed, you can access it.

According to a VMware technical note, here is the general process of how Invoke-VMScript works:

So to illustrate the lack of dependency on network connectivity to the VM, I will do an experiment. I will disconnect the network interface controller (NIC) from the VM and then attempt to run a remote script. Here, I have a VM called "Test-VM." As you can see, I can ping it from my local host: 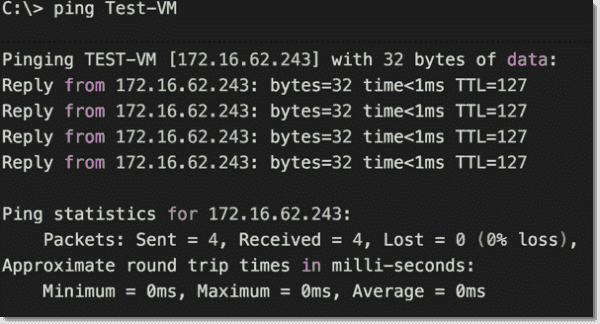 Now I will disconnect the NIC on the VM via PowerCLI:

After disconnecting my NIC, I can no longer ping it from my local host:

Ping after disconnect from local host

Here, I will use Invoke-VMScript to connect to the VM and run a simple command such as Get-Process. Note that first I will use Get-Credential to store my credentials used to authenticate to the guest VM that I then pass to Invoke-VMScript. I have also already authenticated to my vCenter server.

Our experiment worked, proving we do not need VM network access to execute PowerShell remotely on our VMware virtual machine. There are many use cases for using Invoke-VMScript, such as configuring a new server via PowerCLI. In addition, the ability to run both PowerShell and Bash on remote VMs is really convenient and can make an admin's life much simpler.