Use PsExec and PowerShell together

Home Blog Use PsExec and PowerShell together

Surender Kumar  Fri, Apr 1 2022Mon, Apr 4 2022  powershell, remote control  2
In my previous article, we discussed how to use PsExec. As promised, today we will discuss the various use cases in which you can use PsExec and PowerShell together, working as a team.
Contents

How to run PowerShell commands remotely with PsExec

First, let's discuss how to run PowerShell commands on remote computers with the help of PsExec. This ability of PsExec might not be useful for people working in domain environments since they can use PowerShell remoting. However, it is still worth discussing as not everyone works in a domain. There are many small organizations that are still operating in a workgroup environment.

To run a PowerShell command on a remote computer with PsExec, you need to use the -command parameter, as shown in the following example:

Since the -command parameter is the default for PowerShell, you can even skip typing it and just type the command itself, as shown in the following screenshot:

Running a single PowerShell command on a remote computer with PsExec

There are situations in which you might want to run multiple PowerShell commands on remote computers. If you have even a small amount of experience with PowerShell, you probably know that a quick way to run multiple PowerShell commands is to separate them using a semicolon (;). Unfortunately, this will not work straight with PsExec, but we can use the call operator or ampersand (&) to do the job for us. The following example shows how to do this:

This command starts the Windows Update service on the remote webserver, and then shows the status of the service. The call operator (&) causes PowerShell to treat the string following it as a command. The commands will work if you omit the braces, but I prefer adding them for readability. Note that the call operator itself needs to be enclosed in quotes. The following screenshot shows the command in action:

Running multiple PowerShell commands on a remote computer with PsExec

Using this technique, you can run multiple PowerShell commands with PsExec on multiple remote computers.

This command executes a PowerShell script (Get-CompInfo.ps1) on a remote web server; the script itself is stored in a network share. The -ExecutionPolicy Bypass parameter allows the PowerShell script to execute even if the execution policy on that computer is set to Restricted mode. To run the script on multiple computers, you can either use a file (with entries in the format @computer.txt) or specify a list of comma-separated computer names, as discussed in the How to use PsExec guide.

Running a PowerShell script on a remote computer with PsExec

The screenshot shows that the current execution policy on the remote webserver is Restricted, but the script was still executed anyway. Note that the command needs to be run carefully; order matters here with regard to the parameters. If you specify the -File parameter first and the -ExecutionPolicy parameter later on, the command won't work. See the following screenshot for reference:

This error occurs because the PowerShell process (which is launched by PsExec on remote computers) complies with the execution policy before actually executing the script you specified using the -File parameter. Since you specified the script with the first parameter, it is blocked in the first place and the -ExecutionPolicy Bypass parameter isn't even considered. I hope this makes sense.

This is a simple PowerShell script that I use to perform unattended deployment of a few applications in my environment. The interesting thing is in the line number 7. Look how the call operator or ampersand (&) character is used to call PsExec from a remote share. This technique is particularly useful if you don't want to install PsExec on all computers. If you have PsExec set up on all computers, you can specify the complete local path to the PsExec executable.

Have a look at the following screenshot: 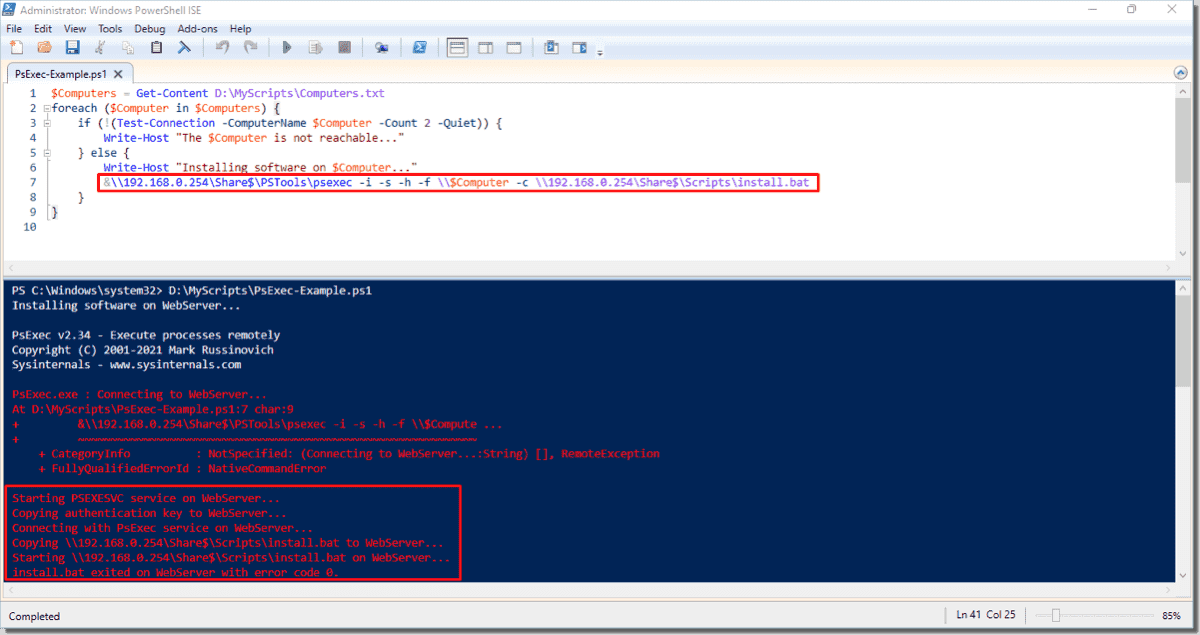 Running PsExec within a PowerShell script on multiple remote computers

I intentionally executed this script in PowerShell ISE since it shows some detailed information (in the section marked in red) that you won't see in the regular PowerShell console.

If you get error code 1619 while doing a package installation using PsExec, make sure the installation package is accessible on the remote computer. See the following screenshot as an example:

This installation package could not be opened - error code 1619

Usage examples with PsExec and PowerShell

In this section, I will cover a few use cases in which you can use PsExec and PowerShell together.

We know that there are certain objects in Windows that are accessible to highly privileged users only (such as NT AUTHORITY\System). The HKEY_LOCAL_MACHINE\SYSTEM and HKEY_LOCAL_MACHINE\SAM subkeys are good examples of such objects. If you try to access these objects with PowerShell alone, you will get an error stating, "Requested registry access is not allowed," as shown in the screenshot.

To get around this access problem, you could use PsExec and PowerShell together, as shown in the following command:

Enable PowerShell remoting on all computers

We all know that PowerShell remoting requires manual configuration on remote computer(s) before you can start using it. In these cases, PsExec proves to be really useful. The following command enables PowerShell remoting on all the computers using the domain_computers.txt file that we created earlier:

Change the service start mode on all computers

Every organization has a different requirement when it comes to setting up Windows services. Some organizations prefer disabling unnecessary services and setting up the service startup mode. The following command is a mix of PsExec and PowerShell to set the startup mode of the Windows Update service to auto on all domain computers:

Note that the command must be executed in the PowerShell console instead of the regular command prompt. The "\\$((get-adcomputer -filter *).name -join ',')" part uses PowerShell to dynamically build the computer names in a comma-separated list by pulling all computers from AD. It then feeds the list to PsExec to run whatever process you want to run.

These are just a few examples of use cases where you can use PsExec and PowerShell together. Once you start using them yourself, you will realize that the potential is unlimited. You will be able to accomplish things that are hard to achieve with a single tool alone. You can remotely manage services, manage software, troubleshoot problems, perform security assessments, perform penetration testing, and much more.