Use PowerShell to execute an exe

Home Blog Use PowerShell to execute an exe

Many of my Windows systems administrator friends know that they can run commands such as the following successfully from a PowerShell console session:

On the other hand, I’m somewhat surprised at how few of these sysadmins understand why and how PowerShell allows these commands run an exe in the first place. Well, I’m here to teach you both the theory and the practice.

We can execute programs such as ping and notepad because their enclosing directory paths (C:\Windows\System32 and C:\Windows, respectively) exist in the Windows search path by default. See here:

When PowerShell detects “oldie but goodie” command-line tools such as nslookup, ipconfig, and net, the parser fires up an on-the-spot Cmd.exe instance and gives temporary control to those programs.

Let’s use a practical example to illustrate. On my system, I use the free and open-source 7-Zip utility for my file archiving and expansion needs. 7-Zip includes a command-line utility named 7z.exe that exists in the directory path C:\Program Files\7-zip.

As you can see, “dot slashing” the call to 7z.exe fails unless we first navigate to the proper directory: 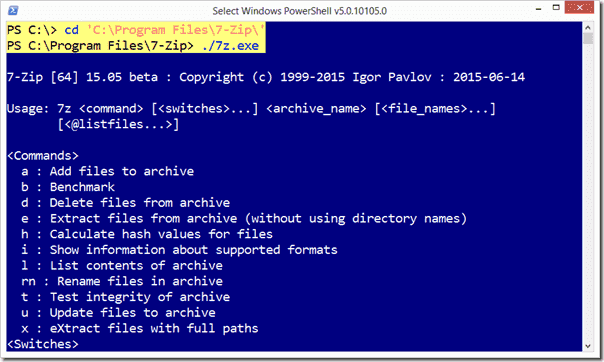 PowerShell can execute an exe, but you need to be explicit in your instructions.

Let’s add that path to our system search path and try again:

The previous statement works all day long; however, you’ll find that the new environment variable disappears after you close the current PowerShell session! To make a permanent change, we’ll need to tap more directly into the .NET Framework by using the [Environment] type accelerator:

Note that you’ll need to open a new PowerShell session to see the change.

Sublime Text is my favorite text editor, and I can run the program on my workstation by running the following two lines of PowerShell code:

However, the following statement fails:

The problem in the above example is that PowerShell has no earthly idea that subl.exe is an executable. As far as the PowerShell parser is concerned, we simply defined an anonymous string. What’s cool, though, is that we can use the call operator (&) to notify PowerShell that the target resource is, in fact, executable:

Passing arguments - where the fun begins

Thus far, you may be thinking, “Tim, you’re not teaching me anything new!” Perhaps you already understood environment variables and even the call operator. Fair enough. But have you ever tried to run an external command in PowerShell that used arguments?

Sure, PowerShell can handle switch parameters and key/value arguments on the most popular network utilities, like so:

However, you’ll find that PowerShell gets a bit...confused...when you use lesser-known command-line tools.

For instance, let’s imagine I have a command-line tool named whizbang.exe that fails spectacularly when I send arguments like so:

The following solution is a bit hacky, but it’s the best we have, even as of PowerShell v5. First, we call the executable with & and then use the --% (that’s two dashes and a percent sign) escape character to instruct PowerShell to ignore what follows and pass it through to the referenced executable:

The following approach, though much more formal, also works. Here, we define variables for each external command element, and then plug the variables into our call:

That last statement reminds me of Perl. 🙂

The last method I want to show you involves splatting. In splatting, we pass a hash table into a command and PowerShell spreads out the hash table contents to be used as parameters. To do this, we first create a hash table that contains our arguments and their values:

By the way, a hash table, also called an associative array, is simply a collection of key/value pairs that we can treat as a unit or by its constituent parts.

We finish by running the exe and passing the hash table variable: