Adam Bertram  Thu, Apr 18 2019Thu, Apr 18 2019  active directory, powershell  27
One of the oldest and most useful tools to figure out what's going on in your Active Directory environment is dcdiag. Dcdiag is a command-line utility that comes with Windows. It allows administrators to run various diagnostic checks against their Active Directory environments.

In the earlier 2000s, a command-line utility that returned dumb strings would have been OK, but today we have smart objects with PowerShell! Let's build a wrapper around the dcdiag tool with PowerShell to bring this handy tool into the current times.

If you run dcdiag by itself, you can see that it returns some useful information, but this is just loose text. Dcdiag does not return objects we can parse and manipulate as we can in PowerShell. 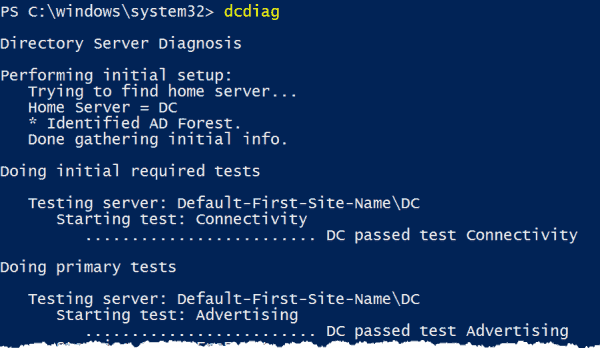 To wrap this tool in PowerShell, we'll need to build a function. I'll call my function Invoke-DcDiag. We can get crazy with this, but to keep it simple, I want to pass a single domain controller (DC) to dcdiag, so I'll create this function with a parameter called DomainController.

Once I've built the skeleton, I can then add in the code. To run dcdiag against a domain controller, I need to use the /s switch, so I'll add that to my function. I need to capture the output, so I'll assign it to a variable. To mimic the code that will go into the function, I'll assign $DomainController a value of DC representing the name of the DC in my environment.

I've now captured the output to a variable. That's great and all, but we now need to parse the output. Let's get our regex on! Before we get that far though, I need to define what the output should look like. Eyeballing our sample output, it seems like for every test that happens, dcdiag always returns one of two strings:

I want PowerShell to return an object for each test result with a TestName, TestResult, and an EntityName to represent a domain controller, NT Directory Service (NTDS) partition, or whatever else the test is running against.

We'll need to parse each line in the string. One way to do this is to use Select-String. Select-String has a parameter called Pattern that allows us to try to match a string against a regular expression. Without teaching you regex, I'll give you the answer here. The regex you need for this is '\. (.*) \b(passed|failed)\b test (.*)'.

When you run it as is, you may think that either I'm crazy or it doesn't work. One of these things is right.

However, PowerShell is hiding regex groups from you. Each regex group contains each of the properties we'd like the resulting output to have. We reference these groups by looking at the various indexes in the Groups array that the Matches property contains that Select-String returns.

You can see below that I'm looping over each match, assigning each group value to an object property we'd like, and then returning the object.

Bringing this code all back into our function makes the function look like this:

At this time, we bring this function into our session, run it via Invoke-DcDiag -DomainController DC, and voila, dcdiag for the modern age!