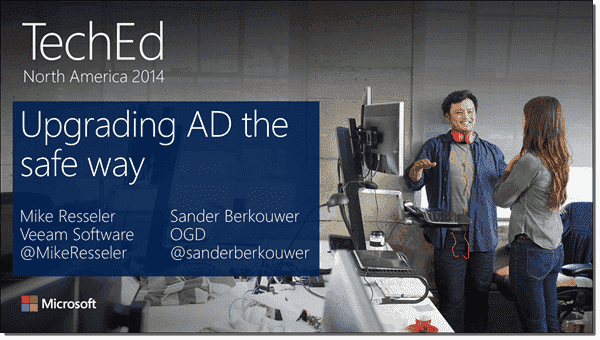 Upgrading Active Directory on premises, however, is not a simple feat.

First, it’s time consuming. Doing it right means building a test plan, building a test environment, making a change plan, and more. A lot of time is spent on something that should be rather easy to do. But, because of the many dependencies on Active Directory, almost every upgrade project becomes very painful and slow.

Third, it’s pretty complex. The upgrade process requires several prerequisites, and after the upgrade you need to do some work to get everything OK.

Fourth, and last, it’s expensive. Due to the complex nature and vast amount of the work, many organizations hired expensive consultants to get their Active Directory upgraded safely.

As Microsoft is moving to a faster pace in releasing new versions of Windows Server and, with that, new releases of Active Directory, this situation needs to end. It’s time to take matters into our own hands and make upgrading Active Directory more straightforward and cost effective.

The AD DS Installation Wizard takes care of all the complexity in single domain environments by validating the prerequisites and even automatically preparing the Active Directory schema for you when needed. It features indefinite retries, so you decide when promotion fails, not the piece of software you’re using.

In bigger environments, the improved Install from Media (IfM) functionality saves you hours of time because it no longer forces you to perform the mandatory offline defragmentation pass.

In Windows Server 2012 Active Directory and up, this means you can deploy full installations and Server Core installations of Domain Controllers, both from the server console and remotely, one at a time or a whole rack full at once.

Dynamic Access Control (DAC) offers the rich authorization scenarios many businesses need. Combinations of claims, based on any attribute of both user accounts and computer accounts, can be used on Windows Server 2012 File Servers (and up) to propose or set access control lists (ACLs) and classifications.

Active Directory–based Activation helps alleviate the burden of licensing devices. Windows and Office installations on domain-joined devices can be automatically activated, and then automatically deactivated when the device leaves the domain.

Virtual Windows Server 2012–based Domain Controllers (and up) incorporate Active Directory virtualization safeguards. These work on top of the VM-GenerationID technology that the hypervisor gives to every virtual machine running on top of it through its tools and integration components.

Virtual Domain Controllers use the VM-GenerationID to see when snapshots are applied or copied. These actions no longer result in USN Rollbacks and Lingering Objects—problems many Active Directory admins faced when virtualizing Domain Controllers.

While the features in newer Active Directory versions might appeal to your environment, some of these features often require more than simply the new version of Windows Server on Domain Controllers.

During our session, Mike and I proposed three ways to make your Active Directory upgrades safely.

Another built-in feature of Windows Server may also be of interest to Active Directory admins: Hyper-V Replica. Using this technology, admins can (test) failover a set of virtual Domain Controllers and member servers from the production environment to an isolated environment.

This is a useful way of creating a test environment for the Active Directory upgrade and its impact on dependent on-premises services, like Exchange, SharePoint, and third-party solutions.

Also, for your Active Directory upgrade, use these three tricks to make your project, and your life, that much easier:

Active Directory upgrades? Yes, we can.