In a virtualized infrastructure the name of the game is getting the most performance out of what you have. One of the key components of any virtual server environment whether it be VMware’s vSphere or Microsoft Hyper-V is some form of shared storage in the form of a Storage Area Network, or SAN, where all of the data files and memory swaps for your virtual machines reside. Keeping this working at optimal speed is a must do, so like any other driver or firmware you periodically need to update them to implement vendor enhancements and bug fixes.

In my environment we utilize Dell Equallogic PS Series iSCSI devices for our storage needs. Equallogic arrays in my opinion are a nice blend of value and performance that any systems or network administrator can learn to do basic setup and administration on in a few hours of poking around.

In terms of value with our latest addition with a fully loaded system with 10k RPM SAS drives we were able to hit a price point of about $1300 per Terabyte, trust me when I say this is very cheap when compared to comparable systems from HP or EMC. Further when looking at iSCSI versus Fiber Channel you cost is even better in that you can typically leverage your existing switched infrastructure for your storage network, simply needing to VLAN off the storage connections from the rest of your network.

Additions to the SAN with Equallogic arrays are very simple as well. In our case we started with a PS 5000 device a few years ago. As our storage needs grew (they always do) we recently added a PS 4100 to the array. As we brought the 4100 online and pointed it at the controller of the existing device it was very simple to add to the existing device pool, quadrupling our storage capacity in a matter of minutes. 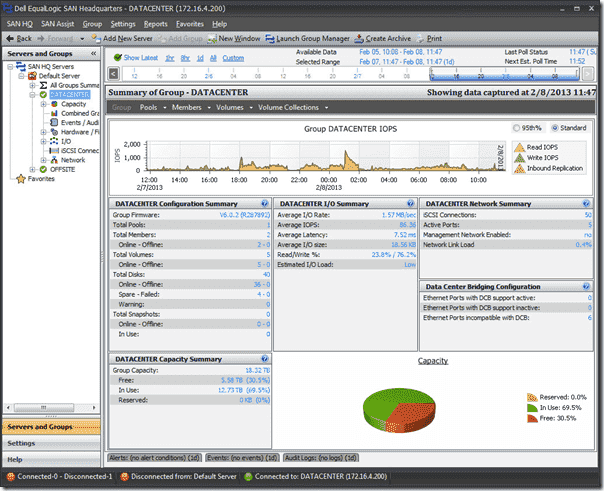 Software for an Equallogic iSCSI environment can be thought of as split three ways. The device firmware is what powers the actual disk arrays and is where most of your enhancement via update is found. This is also what updates the basic GUI for device configuration. Second, is the client operating system integration software; for Windows or Linux (directly accessing the iSCSI from Windows or Linux) this are called the Host Integration Tools. In current versions of VMware ESXi this is called the Multipathing Extension Module, allowing for you to essentially create a mesh network between your redundant iSCSI ports on your ESXi hosts and the redundant NICs on the arrays. Finally Equallogic supplies a client/server management application called SAN Headquarters which allows you to monitor and manage your various storage groups and is overall a very handy tool to have.

Keeping up to date on device firmware is critical to system performance as Dell is constantly improving the product through software fixes and enhancements. The good news is that all actively supported Equallogic arrays in a given series (i.e. PS Series) will all use the exact same firmware. The actual act of updating is fairly simple and can be broken down into a few steps.