Timothy Warner  Wed, Jun 15 2016Wed, Oct 26 2016  password, security  7
Thycotic Secret Server is a popular enterprise password management solution. This post explains the business case for using Secret Server and how to set up and use the product.

Thycotic released the first version of its Secret Server privileged account management (PAM) solution in 2005, and the company's been on a proverbial "rocket ride" ever since. For example, at the PowerShell + DevOps Global Summit this year I was taken aback by (a) how many IT ops and developers I spoke to who use Thycotic Secret Server daily in their businesses and (b) how enthusiastically they spoke about the product.

The problem in a nutshell ^

We all know that the best passwords are those that are as close to random as possible. For instance, I myself use LastPass to manage all my online account credentials. I instruct LastPass to auto-generate strong passwords, and I never need to know what they are. In fact, it's better that I don't remember the passwords myself.

In business, it can be a major pain in the neck to remember complex passwords for privileged accounts. It's even more difficult to rotate the passwords on any kind of regular basis.

Thycotic allows you to download a full-featured 30-day trial with access to support; head on over to the Thycotic web site and register. After submitting your contact information, you'll receive an e-mail message from Thycotic Sales and Support that contains evaluation license keys and a link to the .msi installation package.

Installing the binaries was pretty easy. Keep the following points in mind. You'll need to:

Thycotic Secret Server is in many ways a "garden variety" ASP.NET web application that runs in IIS. This means, for instance, it's quite easy to secure the site with SSL. 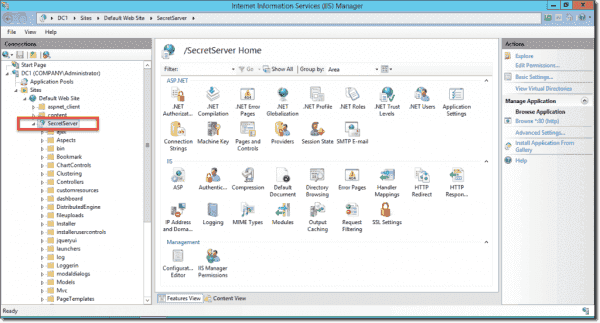 As you saw in the previous screenshot, Secret Server installs by default as a virtual directory under your default Web site. Of course, this location is customizable. Pop open your browser and navigate to http://localhost/SecretServer to complete the Secret Server Setup wizard, as shown in the next screenshot. 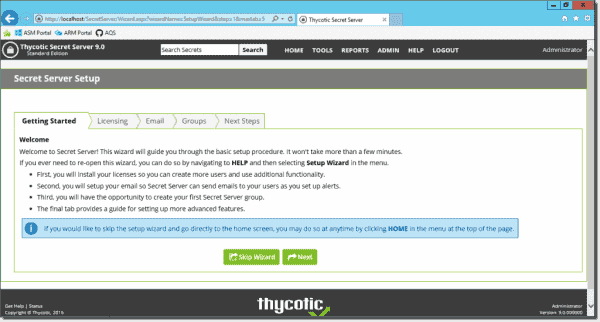 Thycotic defines a "Secret" as any data that you need to keep confidential. This embraces far more than high-privileged user and service accounts. You're likely to have hundreds of secrets built up in your Secret Server installation, so spending the time on the front end to define access groups is a good idea.

Moreover, all Secret Server users can populate their secrets in their personal folder hierarchies in the Web console. The following screenshot gives you a high-level walkthrough of the Secret Server Web console's home dashboard page: 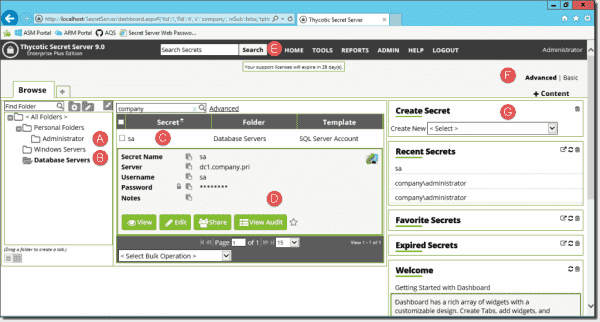 Let's create a new Secret! From the dashboard, we open the Create New Secret drop-down and choose a template. For instance, in this example, I'll choose Active Directory Account. To give you a feel for the breadth of credential support, let me list some other template choices:

And yes, in case you were wondering, you can in fact create your own secret templates. Specifically, a template not only defines the metadata fields that surround your secret but also attaches launcher options. (Once again, we'll get to launchers momentarily.). Check out the following screenshot, and I'll explain what's going on: 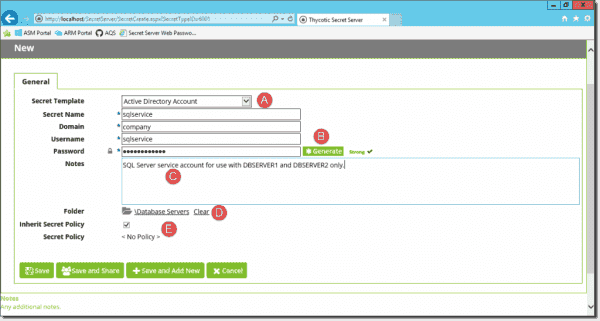 A: Choose the appropriate template.

B: You can instruct Secret Server to auto-generate super-complex passwords. This is great security, and you don't need to remember the password anyway!

C: The Notes field can be helpful in compliance/audit scenarios.

It's beyond our scope to discuss this today, but Secret Server also supports Active Directory credential discovery. Read more about it in the Thycotic Secret Server documentation.

Use Secret Server in production ^

The question of the day is, "Okay. I've installed Secret Server, defined secrets, and organized access policy. Now how do I actually USE the stored secrets?" Well, I'm glad you asked.

One method is simply to view the secret's entry in the Web console and copy/paste the credentials to your target application. That's okay, but not very slick. What's nicer is that Secret Server includes a bunch of built-in launchers for different situations:

In the Web console, click Tools > Launcher Tools to install the Web Password Filler bookmarklet and/or the Secret Server Protocol Handler extension. Since Secret Server is an extensible platform, you can of course author your own launchers. 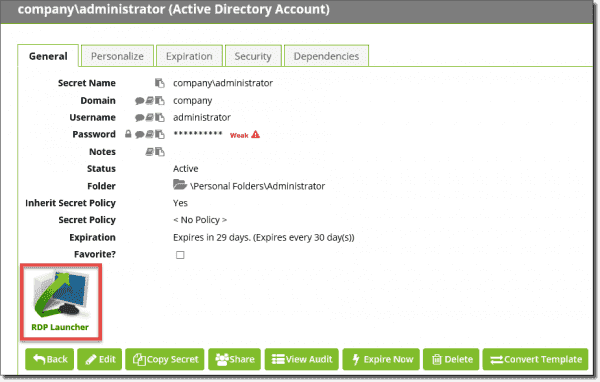 The launcher idea is cool because you never have to view the underlying secret credentials. For instance, the RDP launcher connects you to the target system and transparently injects the stored secrets.

Finally, you'll want to click Reports from the Dashboard home page. Many (dare I say, most?) businesses are under some sort of industry and/or governmental compliance regulations nowadays. To that point, it's crucial for you to demonstrate your password policies and storage methods.

What I like about the Secret Server reporting engine is that the pre-configured reports are so intelligently designed. Take a look at the following screenshot and decide for yourself: 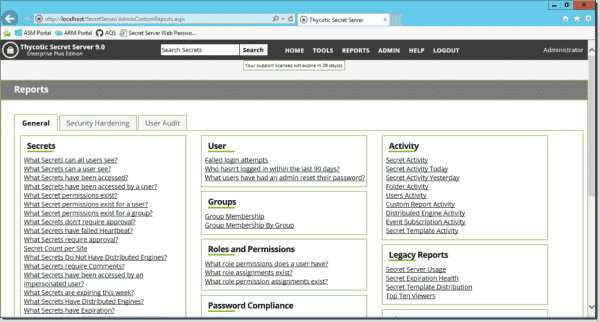 Thycotic sells Secret Server licenses at three edition levels: Professional, Enterprise, and Enterprise Plus. Note that the pricing involves both the server license as well as user licenses.

I've met some of the people at Thycotic, and I admire this company very much. Additionally, like I said at the beginning of this article, the Secret Server users I encounter have a fierce loyalty to the product and its parent company.