If you manage a Terminal Server Farm, a Citrix farm or any bunch of uniform machines, whether physical or virtual, you probably have a set of management scripts that help you get your work done with a minimum effort.

Often the need arises to perform some maintenance tasks on several remote machines, and you face a common sysadmin’s dilemma – do I just log into all these machines one by one (may be good enough if you only have a few machines to handle) or should I find some way to group these multiple remote tasks into one local task?

The most common way to invoke commands remotely is by using PSExec. This is a classic command line tool by SysInternals, that can easily invoke a command on a remote computer/s and redirect the output to your local command shell.

You will need to download PSExec to your computer.

The next step would be to prepare a simple TXT file with the names of the computers on which you want to run the command, one name per line.

In this example, we will use a plain text file named 'CompList.txt' which looks like this:

In this scenario we’ll run the following short script, which cleans the Windows spooler directory and restarts the Print Spooler service, which helps overcome some common printing issues:

Now, assuming the commands above are saved to a batch file named 'CleanSpool.bat' which is located in C:\temp directory, enter the following command on your computer:

This is a sample output of the command:

As you can see, it's fairly easy to run the command, but analyzing the output can be a pain. While your script may run successfully on some computers, you might want to spot those machines on which the service could not be restarted, or on which the script could not terminate successfully for any other reason. Especially if the command you're running produces several output lines, it may take a while to spot these errors as the output is spilled continuously on your command prompt.

Another thing that might prove time consuming, is preparing the list of servers. Assuming your servers are named CTXSRV150 to CTXSRV274 (with several skips), you would have to create a script that creates the list, rather than manually copying and pasting it over and over. On the other hand, if your computer names follow a continuous numeric pattern, you might prefer to leverage the good old FOR command like this:

This way, your command will be executed one-by-one on all servers within the above numeric range. (Tip: if you want to use the FOR statement within a batch file, use %% instead of %).

As you probably know, Microsoft has integrated WMI (Windows Management Infrastructure) on all of its operating systems. In few words, WMI is a framework that allows you to retrieve management data and invoke functions, while abstracting the API level.

Creating a script which uses WMI is a bit more difficult, but once your script is ready, you can re-use it over and over with minor changes. The major advantage in using a WMI script is that your flexibility is almost infinite. You can analyze the output within the script, notify upon failures and even run corrective actions.

The disadvantages, however, is that you have to work hard for each change, test it thoroughly and only then run it on your production environment.

Here is a little script I made for generic execution of remote commands:

The money time of this script is in the following line:

It tells the remote WMI namespace (initialized using the Set objWMIService statement) to execute the process.

I saved the best (and my favorite) for last:

If writing a script is not for you, or if you're simply short of time and you want to get things done as quickly as possible, you should really give ControlUp (by Smart-X) a try. Not only that you don't have to write even a line of code, ControlUp analyzes the output for you and shows you exactly which servers need further attention.

After you download the product, the first step would be to select the remote computers on which you want to run the command. You can select the computers from a text file, from an IP subnet, or by selecting them from any Active Directory domain to which you have access, even those with no trusts with your own domain: 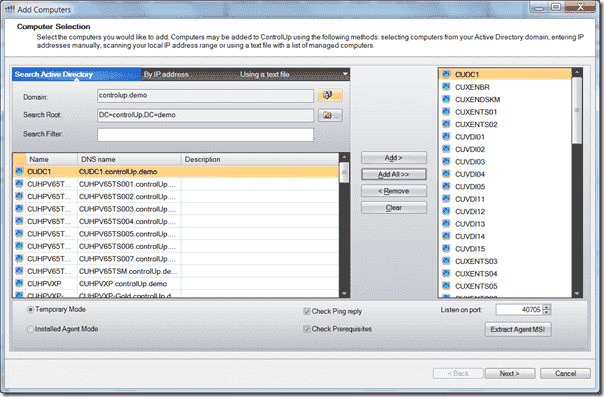 Similar to PSExec, ControlUp launches a small service on each of the computers. This service will be automatically removed once you close the application.

After you added the computers, simply select them from the main grid, and select 'Run As' from the context menu. 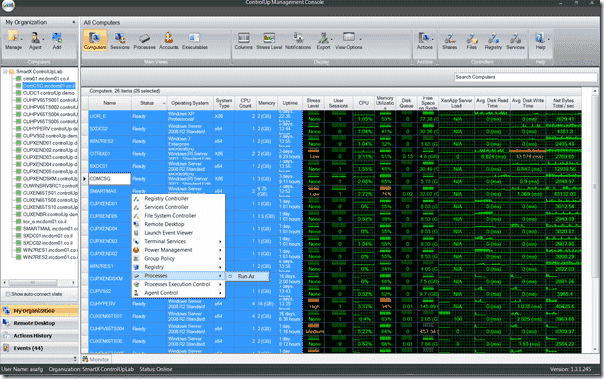 Use ControlUp to run remote commands

On the 'Run As' screen, you can specify alternative credentials (If not specifying any credentials, the command will run under the system account of the remote computer) 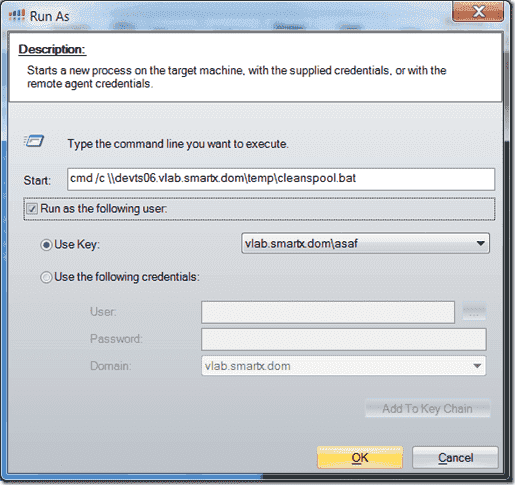 Run As with ControlUp

Once you click OK, the requested program or script will be executed on all of the target machines you selected, in a way similar to PSExec, except for the fact that your commands will run in parallel, without keeping you waiting for each target to be completed before proceeding to the next one. You will also see a progress window, showing you a summary of the command’s success and failure outcomes on all your target machines: 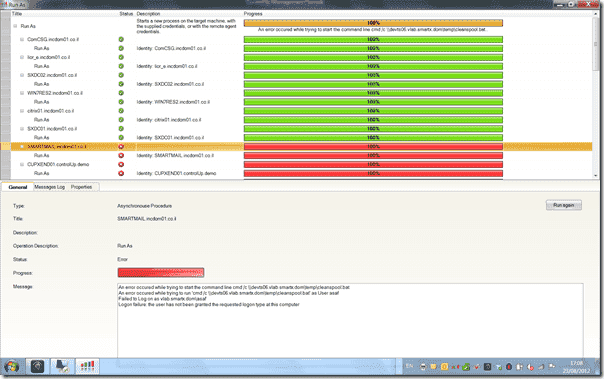 As you can see, some computers have encountered errors during the attempt to invoke the command. You can now fix the problem and use the 'Run Again' button to retry.

Another nice thing about ControlUp is that it's shipped with a set of tools that spare the need to write batch files, such as manipulating Windows Services, Registry, policy and Terminal Services sessions, but that’s a different story.

I made a small comparison chart that summarizes the differences between these three methods, which will hopefully help you select the most suitable solution for your purposes: 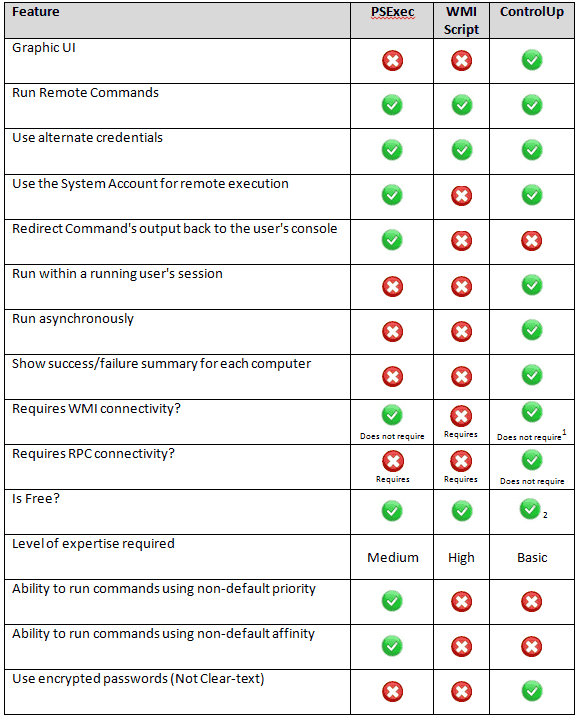