Disclaimer: This poll is not conducted by Microsoft. At the time of this writing, there is no official announcement from Microsoft regarding the new features of Windows 8.

First of all, I want to thank all who sent me ideas for this Windows 8 poll. Creating a wish list for Windows 8 was more difficult than I anticipated. Obviously, this 25-year-old operating system still has plenty of room for improvement.

While all the suggestions I received certainly made sense, I had to reduce the number of options for this poll to a reasonable number. This is why I included only possible key improvements that would have a major impact on the majority of Windows users.

It is quite obvious that Microsoft won't add all enhancements listed here, and for some features it is not very likely that they will consider them any time soon. But who knows, if those options receive enough votes, someone at Microsoft might get interested.

The 17 blogs listed below will run this poll within the next days or so. The votes are automatically integrated in the cloud, so please vote only once. If you also want to run this poll on your blog, please contact me and I will send you the code to embed the widget in a post or on your sidebar.

Before you vote, please read the short explanation of every option.

Android and iOS are good examples of operating systems with innovative user interface models. Even more revolutionary will be Windows 7 Phone. These examples show that OS interfaces beyond the Windows Start Menu and the Windows Taskbar are possible.

Linux is a good example of a modular operating system. It allows you to install only those OS components you really need. This would require a package manager that resolves software dependencies. The advantages of more modularity are lower hardware requirements, a reduced attack surface, and simplified patch management.

Third-party management would allow you to update common Windows applications of third-party vendors through Microsoft's online update service. Linux has this feature for as long as I can remember.

A bare metal hypervisor would enable you to run multiple Windows installations simultaneously on a PC. You could move your virtualized Windows installation with all applications to another PC or to a VDI environment by simply copying the virtual system drive.

Virtualized applications run in an isolated environment that ensures no modifications to the OS are made during installation and at runtime. Application virtualization can solve compatibility issues and improves security.

Like Apple's App Store, Windows Store would allow you to buy and download third-party applications that have been approved by Microsoft.

If you messed up your Windows installation, this feature would enable you to restore Windows to its original state without losing your data and without the need to reinstall all your applications.

Third-party software vendors could allow you to use cloud APIs to add cloud features to their applications. For instance, a web browser vendor could store your bookmarks, plugins, and browser settings in Microsoft's cloud or in the cloud of a third-party provider. That way, all your settings and data would automatically be available on every Windows machine you log on to.

Wouldn't it be cool if you could log on to Windows or an online service with a smile at your web cam (facial recognition), with a friendly "Hi, it's me" (voice recognition), or by just touching your beloved PC (fingerprint recognition)? Biometrics applications have already been available for a while, but they will only have a fair chance of being adopted in the Windows ecosystem if Microsoft fully integrates these functions into Windows.

Instant-On means that Windows wouldn't have to boot up when you turn on your PC. Considering that computers are becoming more and more an integral part of our daily life, this could be an interesting feature for home users in particular. It is probably a must-have feature for tablets.

If Windows were delivered with integrated malware protection, every PC would be protected right after the installation, which would make the whole Internet a safer place. Third-party vendors could offer services such as antivirus signatures and antivirus applications that run on top of the Windows malware scanning engine. This would also reduce notorious compatibility problems with antivirus scanning engines and would even allow you to run multiple antivirus applications at the same time.

Windows XP is a very popular operating system and it will still probably run on many computers even when Windows 8 is released. These Windows customers would appreciate a seamless migration from Windows XP to Windows 8.

If you think that Microsoft should focus on improving the security features of Windows 8, then you should vote for this option.

Speed is always important. If it matters most in your environment, then you should tell Microsoft now.

If you intend to run Windows 8 on old computers, then you need a Windows 8 which requires only minimal hardware.

Some people think that Windows already has too many features and would prefer a slim Windows 8. 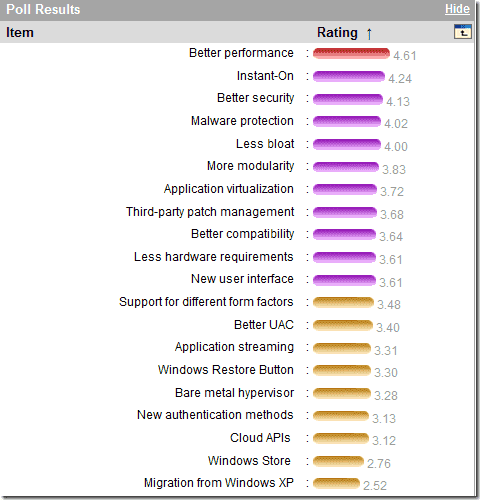