Graham Beer  Fri, Aug 17 2018Mon, Aug 20 2018  powershell, powershell beginner  0
Like many other high-level languages, PowerShell gives us the ability to preserve line breaks, tabs, whitespace, and other text formatting with the here-string. I'm going to be looking how you create and use a here-string in PowerShell.

To define a here-string in PowerShell, you need to use the @ character followed by either a single or double quote and then a newline. To end, close the quotes and add another @ on a newline, so it looks like: 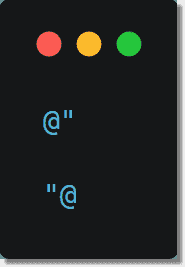 Once you have created this here-string enclosure, you are free to add newlines, symbols, and text formatting, with no restriction on the amount of text written. PowerShell uses the .NET System.String type, which represents text as a sequence of UTF-16 code units. The advantage to using 16-bit Unicode is that it has a character set capable of encoding all 1,112,064 valid code points. So you can use characters from every language in the world!

Here-strings may be either literal (single-quoted) or expanding (double-quoted), just like regular strings in .NET. If you use single quotes with the here-string, it will not expand any variables and subexpressions. The best use for the single quote option is for string text not required to change.

We now know the here-string can preserve the formatting. Here is an example of this:

In this example, we used a literal here-string. Here is a something a bit more interesting, the expanding here-string:

Another useful technique for the here-string is the redirection to a file. By either piping to Out-File or using the redirection operator >, you can create a script or text file:

Following from the previous example of creating code files from a here-string, you can also perform code generation while preserving the code formatting. I've used the here-string in this example with the Add-Type cmdlet to generate a small C# class:

The TypeDefinition parameter of Add-Type allows me to use a here-string containing my C# code. The C# code itself is a simple class that uses a static method to add two numbers together.

Although very simple, the here-string is a flexible and useful way to work with larger blocks of text. The examples I've shown in this article give some good cases of how you can use the here-string in your PowerShell code.