Wolfgang Sommergut  Thu, Aug 4 2022Tue, Aug 9 2022  cloud computing, microsoft 365  6
Traditionally, the Office applications followed a lifecycle of five years each in mainstream and extended support. However, the situation is now more complicated because the apps are also limited in their use by being disconnected from the Microsoft 365 cloud services or when being run on an outdated Windows.

Office 2013 is currently coming to the end of its lifecycle, which ends on April 11, 2023. Given the lack of significant innovations in the newer Office applications, many companies might want to stick with the old apps, even if Microsoft no longer provides security updates for them.

One obstacle to the continued use of unsupported Office applications, however, is that they can no longer connect to Microsoft 365 cloud services, such as Exchange Online or OneDrive.

In the case of Office 2013 SP1, Microsoft points out in this support document that these applications may already encounter reliability or performance issues when communicating with the Microsoft 365 cloud services.Nevertheless, they will not be actively blocked from Microsoft's online services before April 2023. 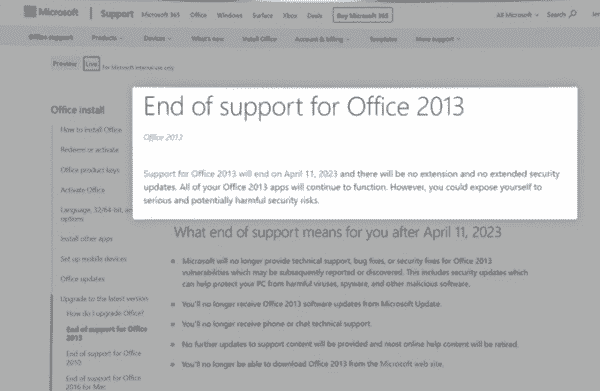 The opposite is true for the two newer versions in the Long-Term Servicing Channel. Office 2016 and 2019 will still receive support until October 14, 2025, but will no longer have access to Microsoft 365 services as early as October 2023.

Update: It seems like Microsoft will not actively block these versions from using M365 services. Instead, users will get no support in case of connectivity problems.

Since Office 2019 users received a shorter support period of seven years for their software, the effective lifecycle of these applications shrinks to five years if companies want to access Microsoft's online services.

Those who don't want to switch to a subscription version after the end of life for their current Office apps can still update to Office LTSC 2021. But this version will inherently only get five years of support, i.e., until Oct. 13, 2026. However, it will be able to connect to Microsoft 365 services until that date.

This is currently the only upgrade path for companies that want to use Office applications on a Windows Server 2022-based terminal server. Microsoft does not support the Microsoft 365 apps on this server OS.

Office applications can also lose support if they are still within the lifecycle but are running on an operating system that is no longer supported.

In a blog post, Microsoft points out that the Microsoft 365 apps will no longer be supported on Windows 8.1, Windows 7, or Server 2008 R2 with Extended Security Updates (ESU) from January 10, 2023. From this date, you can't even install them on Windows 8.1.

On supported operating systems, Microsoft 365 apps are subject to the Modern Lifecycle Policy, which requires users to update the apps regularly. The intervals depend on the channel from which you get the applications.

When upgrading to a new version of Microsoft Office, companies can no longer assume that they are set for the next 10 years.

On the contrary, Microsoft limits the use of the LTSC versions in particular with additional restrictions. These include, above all, an inherently reduced support period, disconnecting them from its online services or granting no support on outdated operating systems.

All these measures obviously serve to push customers toward subscriptions, which lead to higher costs in the long run. If users want to deploy Office on a terminal server under Windows Server 2022, however, only the LTSC versions are available to them.