TechEd Australia 2013 impressions – IT pros out of focus?

Home Blog TechEd Australia 2013 impressions – IT pros out of focus?

Paul Schnackenburg  Tue, Sep 10 2013Wed, Sep 11 2013  microsoft  1
Yet another TechEd Australia has come and gone. A bit of a weird event really, excellent in some ways, scary in others (a bigger focus on developers, along with the axing of the TechNet subscription = IT Pro’s aren’t important to MS?). I got the feeling that Microsoft is a bit lost at the moment with RT tanking, Ballmer going and Phone not really moving and now the Nokia buy.

Four days on the Gold Coast filled with technical sessions, engaging speakers and the best feature of any technical conference – the connection you make with other IT people.

This year TechEd didn’t sell out (for the first time in a few years), there would have been space for another 100 to 200 delegates. This could be read as a sign that Microsoft is in trouble as far as support from the IT Pro and developer communities in OZ or it could simply be due to tougher conference budgets in businesses. The 2500 delegates that did attend were as keen and vocal as any other audience I’ve seen at TechEd over the years though. 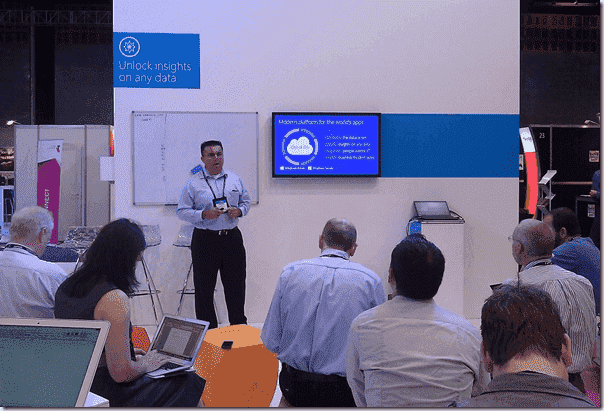 Microsoft unlocks insights on any data

For IT Pros the event started with a plenary session headed by Ben Armstrong and Jeff Woolsey – focused on Hyper-V and Storage Spaces in Windows Server 2012 R2 along with Azure Pack – a deep technical session which was cool. Unfortunately it was a bit of a let down when Jeff forgot the password for this Azure Pack VM and couldn’t remember it for the rest of the session (turns out it was “password” :)).

The keynote was a bit disjointed with a lot of looking back over the past as this was the 20th anniversary of Tech Ed in Australia. Content in the IT Pro breakout sessions was focused on Azure, Windows Server 2012 R2 and Windows 8.1 deployment, Office 365, Lync/Exchange 2013 and SQL 2014. Notably there were only a few sessions on System Center and proportionally there were more sessions for developers this year than any of the last seven years that I’ve attended. This could be sign of the times – the move to cloud computing (although still in its infancy here in Australia) is definitely more friendly to developers than IT Pros. The focus on developers could also have been due to the “rock star” presence of Scott Guthrie.

Best T-Shirt of the event? The sign of a stop sign and an apple logo with the text “the only good apple goes in pie”. Memorable quotes? When asked “what’s Azure going to look like in 10 years?” – Scott Guthrie answered without missing a beat “Skynet” or his other quote “given enough time and pressure, everything fails”. Rick Claus on Storage Spaces in 2012 R2 – “there are no SANs in the cloud” was another favourite quote of mine.

As media representatives we were privy to a couple of private presentation where Cash Converter’s approach to IT was probably the most interesting. With a planned rollout of a new server to each of their 120+ stores in Australia they were budgeting 1.5 million dollars in hardware alone and they also realised that by the time they were finished deploying they’d have to go back and start all over again as those servers would have reached end of life. Instead they now host a PaaS server with their custom PoS software and a PaaS SQL server service in Windows Azure and expect to spend about 50 000 dollars a year in service fees.

Each store has at least one ADSL line (some have two with different ISPs), with a 3G wireless connection for failover to combat internet connection outages. Hanging over the whole event was the announcement that Microsoft was buying Nokia and despite several of my journalist friend’s attempts to get statements by representatives from either company it was clear that everyone was surprised and it was too early to tell what it was going to lead to.

The expo floor was heavy on Lync services and hardware, while Intel or HP as a major hardware vendors were notably absent.

The wrap party on Thursday night was hosted at Movie World which was a good choice given the audience. The offer to buy a Surface RT at the reduced price of $ 289 was a bit of an insult - $ 99 would have been acceptable and it didn’t go down well with most attendees I spoke to. On the other hand every delegate who completed an event evaluation received a one year subscription to Office 365 Home Premium for free.

The buzz among the delegates I spoke to was generally positive – awe at the pace of innovation in Windows Server 2012 R2 and System Center 2012 R2 and overwhelm at the incredible pace of new features and capabilities in Windows Azure. A bit of head shaking around Windows 8 / 8.1 was common, frequent jokes about PRISM and NSA spying on everyone’s data and groans about how hard it’s getting to keep up with all the new technology.

The key to a successful TechEd attendance are good technical sessions (check – I caught quite a few excellent breakout sessions), decent parties (check) but most of all connections with smart people in the industry that you would probably never have met otherwise (check – I made some excellent connections this year). If you’re an IT Pro or developer that works with Microsoft technologies and you haven’t yet attended a TechEd in your region you owe it to yourself and your career to push your boss to let you go.

Paul Schnackenburg attended TechEd as a guest of Microsoft Australia.