Paul Schnackenburg  Wed, May 25 2011Mon, May 30 2011  hyper‑v, system center  0
In this part we look at how a private cloud works in SCVMM 2012, how the fabric makes up the underlying components of a cloud and how the library has been improved as well as the new Run As account and Run As profile features.

Maybe it’s just me but when there’s been SO much talk about the cloud in IT over the last year or two and when there’s a button called “Create Cloud” inside a new product it tickles my interest.

In SCVMMs terms a cloud provide the following characteristics; self-service to allow administrators to delegate provisioning of VMs in the cloud, resource pooling and opacity because users need no knowledge of the underlying physical hardware. It’s also elastic as it’s easy to add resources to increase capacity and private clouds can contain hosts from all three supported hypervisors, you can even create a SCVMM cloud from a VMware resource pool.

Creating a private cloud in SCVMM is a matter of a simple wizard (and some planning!)

For private clouds you can specify quotas with maximum number of VMs, virtual CPUs, storage and memory. Maximum storage is based on the max size of dynamic virtual hard disks if they’re in use and maximum memory is measured against running VMs only.

The fabric in SCVMM refers to all the infrastructure pieces that are necessary to host VMs. The fabric is made up of hosts, host groups, the library, networking and storage. Grouping hosts together lets you control placement weights, dynamic optimization and power optimization, reserves, network and storage resources for the group as a whole. You can build a hierarchy of host groups where child groups inherit these settings from the parent host group.

The library has been enhanced to support services (see part 5), sharing of resources in a private cloud; drivers for bare metal deployments, SQL data-tier apps and web deploy packages. Custom resources are now indexed and visible if you copy a folder with the .cr extension to the library share.

Another addition to the library is resource groups which allows users to group equivalent sets of resources in separate geographical locations. A Windows Server 2008 R2 .vhd file might be stored on different continents and be added to a resource group. In templates and profiles you can now reference the group rather than a specific .vhd which will make life easier for administrators in distributed enterprises. 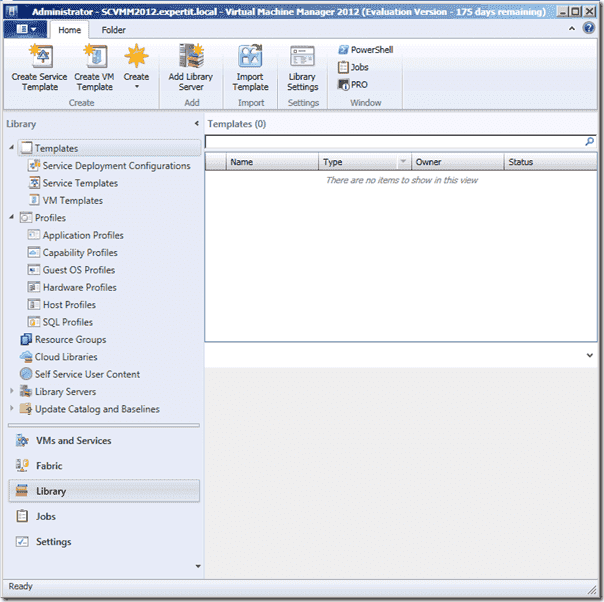 Managing accounts and security in SCVMM 2012 ^

A welcome addition to SCVMM is the concept of Run As accounts and Run As profiles. These are stored credentials that allow you to delegate tasks to junior administrators and self-service users without exposing sensitive credentials. There are six different categories of Run As accounts: host computer accounts provides access to Hyper-V, ESX or XenServer hosts, BMC accounts talks to Baseboard Management Controller (BMC) on hosts for out-of-band management, external accounts are used for external systems such as Operations Manager and network device accounts connects to network load balancers. Profile accounts are used in Run As profiles for service creation, in OS and application profiles as well as SQL and host profiles.