Paul Schnackenburg  Mon, May 23 2011Mon, May 30 2011  hyper‑v, system center, vmm  0
In this part we’ll do the 10 000 foot view of what’s new in System Center Virtual Machine Manager 2012 as well as what’s required for installation and some tips around creating a highly available SCVMM environment.

I love when Microsoft takes an already good product and adds a whole lot of new features to make the next version not just better but excellent. This is what’s happening with System Center Virtual Machine Manager (SCVMM) in its new version: 2012, currently in beta, to be released in the second half of 2011. 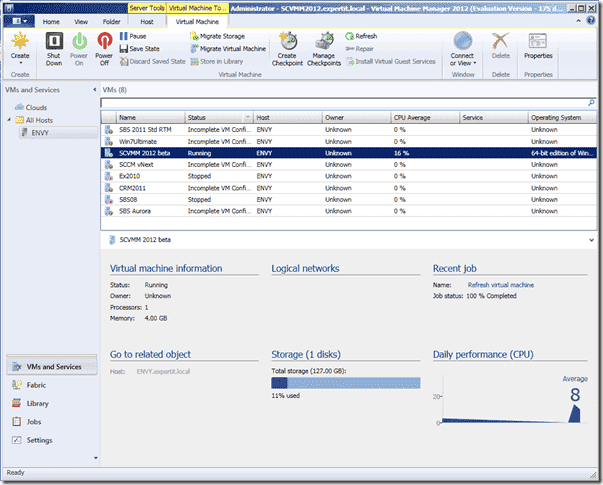 The Office Ribbon interface makes its mark in SCVMM 20212

In this article series we’ll take a look at what’s new, what’s improved and introduce the new concepts and capabilities of SCVMM 2012.

The biggest shift in SCVMM is the change from managing Virtual Machines (VMs) to managing the entire virtualized datacentre. The shift is so dramatic that “System Center Data Centre Manager” might be a more appropriate name. SCVMM can communicate with brand new machines with no OS installed and do a bare metal installation, then configure them in a Hyper-V cluster as well as talk directly to your SAN storage. This then becomes a private cloud inside of SCVMM that abstracts hosts, storage, and networking into a unified pool of computing resources.

Add to this the ability to use Server App-V to deploy applications through SCVMM as well as SQL Server profiles to deploy customised database servers and Dynamic- and Power Optimization. The latter allows SCVMM to turn off host machines when they’re not needed and then turn them back on when the load increases whereas the former allows SCVMM to automatically move VMs between hosts to balance the load. The concept of multiple virtual machines working together (web front end servers, backend database servers) is covered by a services concept where multiple machines can be provisioned in unison; if the load increases scale out with additional VMs can be executed. Network load balancer appliances are also recognised and supported directly in SCVMM.

Patching a host cluster is a difficult task as each node has to have its VMs migrated to other hosts, the system patched and rebooted before the process is repeated on the next host. SCVMM now orchestrates cluster host patching as well as integrating with Windows Server Update Services and allowing you to define baselines of patches that each host needs.

The list of managed hypervisors has grown, not only does SCVMM manage Hyper-V and VMware, it now manages Citrix Xen server as well, covering all the major hypervisors on the market.

Due to all the critical functionality of SCVMM it’s recommended to implement a highly available system if your environment is large. This means that you need a smaller cluster, separate from your production resources that will house instances of SCVMM. This cluster needs to be on Windows Server 2008 R2 and it needs to be setup before SCVMM is installed. It’s also good practise to setup a highly available SQL Server database on separate hardware as well as storing the library on highly available file servers. In this configuration the encryption keys that SCVMM use to protect data transfers need to be stored in AD (so they’re available to all SCVMM nodes) and you have to use domain accounts to run the different services.

When planning a System Center Virtual Machine Manager 2012 deployment consider the different roles. In a small environment these can all be located on the same server but as the datacentre grows it’s beneficial to split the roles across multiple hosts. The management server is the heart of SCVMM, whereas the library server stores templates, VHDs, scripts etc. The console can run on the management server as well as be installed on workstations for remote management, the self-service portal allows designated users to create and manage their own VMs and finally the database resides on an SQL Server machine.

Software that needs to be installed on the server is the usual suspects: WinRM 2.0, .NET Framework 3.5 SP1, PowerShell 2.0 (for the console), IIS (for the self-service portal) and Windows Automated Installation Kit (WAIK) for Windows 7. Supported operating systems are Windows Server 2008 SP2+ (x64 only) / 2008 R2 and the backend database needs to be either SQL Server 2008 SP2+ or 2008 R2. This means that SQL Server Express is no longer supported for the database server; it has to be a full version (Standard or Enterprise).

Supported virtual machine hosts are the Hyper-V role in Windows Server 2008 / 2008 R2, full installation or server core as well as the free Hyper-V Server 2008 R2. Microsoft Virtual Server 2005 R2 is no longer supported. VMware’s virtualization platform is supported as it was in earlier versions through vCenter Server, now requiring version 4.1 with hosts running ESXi / ESX 4.1 and 3.5; ESX 3.0 is no longer supported. Citrix XenServer is supported with version 5.6 with Feature Pack 1; there’s an Integration Suite supplemental pack for SCVMM. The XenServer support will be useful when you want to run Linux guests as the choice is wider than what’s supported in Hyper-V.