Paul Schnackenburg  Wed, Jun 20 2012Mon, Jun 25 2012  system center  0
The third part of this six part series looked at SLAs and Release Management in System Center 2012 Service Manager along with Connectors. This fourth part we’ll look at how to automate IT service delivery and how SM can help with this along with how to use SharePoint to customize the end user experience.

Service delivery and automation in SCSM 2012 ^

To really gain the benefits of private cloud requires automated IT service delivery, something that SCSM is built for. Each Service that you provide to the business can have several Service Offerings, for instance the communications service could have: setting up a new mailbox, moving a mailbox or changing a mailbox. Other example of a service request could be to increase the mailbox quota for a user, add a user into an AD security group, or issue a new laptop to a user. Another crucial part of a successful implementation is around standardizing your service offerings into a few choices so as not to overwhelm users with too many options.

The other important part is to make your processes around fulfilling service requests as automated as possible and also making sure that users can track the progress of their requests without having to call the helpdesk, a feature that’s available in the self-service portal. It can also be augmented with email based notifications; this is also available for notifying approvers, the people who have to OK particular requests before they can proceed.

The benefits of a comprehensive service and delivery automation infrastructure are faster service for users, which leads to increased user satisfaction. It’s also easier to demonstrate compliance with Governance, Rick and Compliance (GRC) legislation, user requests are captured in a standardized fashion which improves reporting significantly, user errors are reduced through automation and overall cost is reduced. 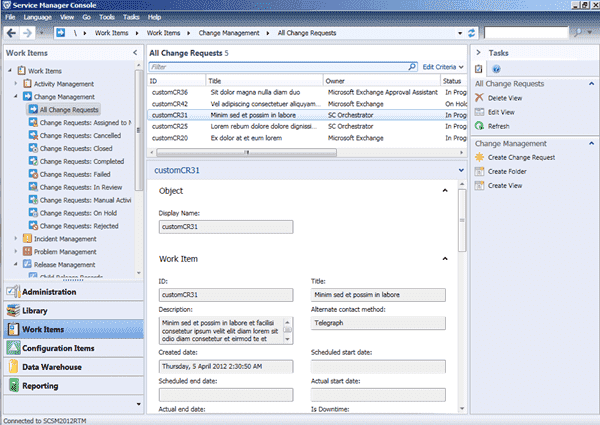 Navigating the Service Manager console is quite intuitive, once you’ve understood the terminology it uses.

The previous version of SCSM had a custom, web based self-service portal that really wasn’t loved by either end users or the IT Pro’s designing for it. The 2012 portal runs as web parts in SharePoint (either the free Foundation or Standard / Enterprise), is Silverlight based for a more pleasant user experience and is MUCH easier to work with for designers.

As it’s integrated with SharePoint (SP) you can use normal SP tools for customizing the look and feel as well as add SP forms. The new portal offers the service catalog, role based access with user interface trimming so you only see request offerings available to you, a knowledge base with help articles and a list of your own requests and activities. An example of role based access could be that only members of the HR department can see the Service Offering to create new user accounts.

The user interface for designing self-service screens is vastly improved in the 2012 version but there’s still one feature missing (and often requested). You can ask a series of questions but you can’t base options in later questions on the answer in a previous question. I’d be nice for example, if you’re requesting a new laptop of a particular model, that only the applicable amounts of memory are offered in a later question.

As with other programs in the SC suite, reaping the full value isn’t about the technology, it’s about sitting down in the IT department as well as with the rest of the business and figure out what services IT should offer and how. Once you have the right processes and services defined SCSM lets you build Service Offerings as containers for Request Offerings, or put another way, service offerings are what users see, request offerings are what you setup to actually happen in the background. You can put in knowledge base article links into request offerings, ensuring that users have clear information for how to fill in the request form. 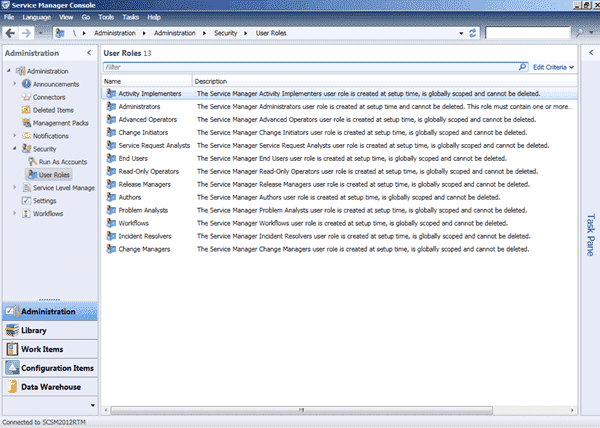 Role Based Access isn’t new in Service Manager, it’s been built in since the first version but there are some new roles covering Release Management.

This next part in the series will cover how OM Management Packs fit into System Center 2012 Service Manager, how you can make your own MPs for Service Manger  / Operations Manager as well as two free add-on packages for Service Manager; the IT GRC Pack and the Cloud Services Process Pack.