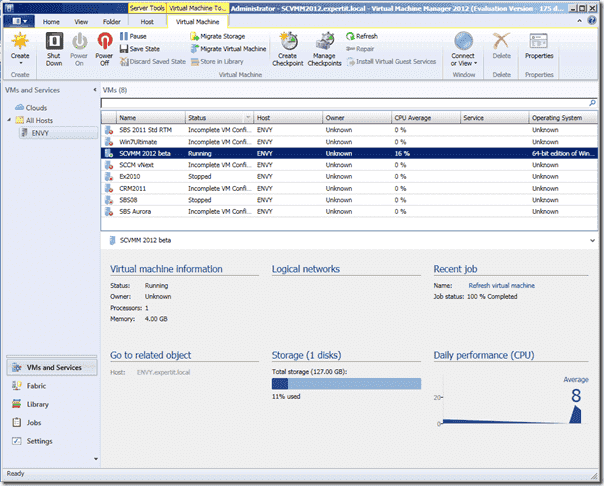 There’s no doubt that VMM 2012 SP1 is receiving the lion’s share of the improvements in this service pack with a huge list of changes and improvements.

VMM 2012 RTM offers the concept of logical networks, where each datacentre in a business’s virtual infrastructure might have a network called “corpnet” for instance and when new services (one or more VM servers encapsulated in a rich template) are deployed they automatically select the right subnet for each VM depending on the physical location. Hyper-V in Windows Server 2012 takes this to a whole new level by allowing each VM to have its own IP address as well as a provider assigned IP address, in effect virtualizing the underlying network.

Each VM “thinks” it’s running on a network it owns and controls but behind the scenes the platform is actually operating the network using a different set of IP addresses. The net effect is that you can have several VMs on the same host with the same VM IP address as long as they’re on separate provider networks.

This also means that it’s MUCH easier to port a set of in-house VMs to a cloud provider without having to redo an elaborate IP address scheme; the VMs just keep their existing IP addresses. VMM SP1 fully supports this functionality through new panes in the Fabric space in the UI. The new Logical switch framework (equivalent to the distributed switch in VMware’s VSphere) lets you centrally define switch settings and networks and these are automatically distributed to all hosts, VMM fully supports this.

Some sysops might say that segregating VMs / tenants is easy with VLANs but they were never designed for this in the first place and they also don’t scale to huge environments (they top out at 4095 technically but most switches limit them to about 1500) as well as incurring manual overhead for configuration and maintenance.

The underlying virtual hard drive format is also updated in Windows Server 2012; the new VHDX format supports disks up to 64 TB in size along with reliability enhancements and the ability for third party utilities to add information into the actual disk information.

The most significant overhaul is perhaps the fact that the “integrate with SAN storage” software stack that was built for VMM 2012 RTM is being ported to Windows Server 2012. This means that the underlying OS will have the capability to work with iSCSI and Fibre Channel SANs in a way that’s never been possible in the past and of course VMM 2012 SP1 will take full advantage of this.

Some Dell Equallogic and HP LeftHand SANs use dynamic targets, something that the RTM version struggled to work with seamlessly, SP1 will fix this problem. For all SAN arrays RTM refreshed the information provided by the SAN every 24 hours by default; but as they’re often managed by the SAN administrator outside of VMM this could mean out dated views and so administrators sometimes lowered the refresh rate to every hour or two, creating undesirable load on the arrays. SP1 supports notifications to be sent from arrays to VMM when important changes take place so the default refresh rate should be adequate. SP1 will also support SAS attached storage arrays, popular in smaller environments.

Another big change in Windows Server 2012 Hyper-V is the support for running VMs off file shares over the new SMB 3.0 protocol, something SP1 will support. The classification of storage that VMM provides for SAN storage will also be available for file share storage and the intelligent placement algorithm (the part of VMM that recommends the “best” host for a particular VM) can now also take into account storage classifications.

Clouds can be scoped to only offer particular storage classifications, providing additional control over how storage is used by VMs. Whilst RTM offers the ability to rapidly provision VMs where it can talk to the array using SAN copy capable templates this is limited to one VM per LUN. Through Windows Server 2012’s support for Offloaded Data Transfer (ODX) this now allows the rapid creation of multiple VMs per LUN.

With Live Storage Migration built into Windows Server 2012 Hyper-V, VMM SP1 will enable all different types of Live Migration, within a cluster, between clusters, in and out of a cluster and between stand-alone hosts.

Anti-affinity, the ability to say that “these two VMs should not be on the same host in a cluster” is offered in Windows Server 2012; VMM SP1 supports this and also adds the capability to define this for stand-alone hosts.

Another new feature in Windows Server 2012 is IPAM, there’s a script to upload VMM IP address pools (like DHCP but used to assign fixed IP addresses to VMs) to IPAM.

In the next and third part of this four part overview of System Center 2012 Service Pack 1 we’ll look at other improvements that are coming in Virtual Machine Manager 2012 SP1.