Paul Schnackenburg  Mon, Jul 2 2012Tue, Jul 3 2012  system center  3
In this two part overview of System Center 2012 App Controller we’ll first look at what this self-service portal does and how to connect it to private clouds through VMM. In the second part we’ll look at how it manages Windows Azure subscriptions, other self-service portals and how to move VMs from private clouds to the public cloud.

App Controller is the only truly new component of System Center 2012; it’s a self-service portal for application owners to manage their IT services housed in private clouds as well as Windows Azure public clouds. Coming in Service Pack 1 is the ability to manage applications in hosted third party clouds. 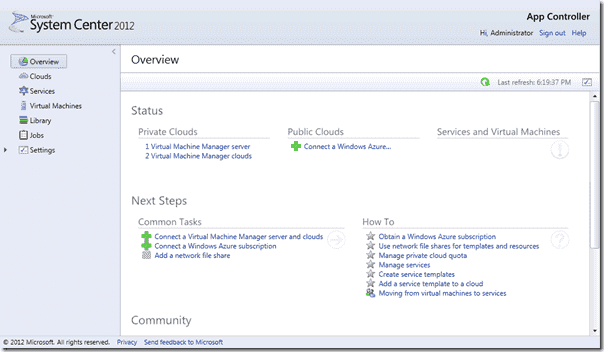 It’s helpful to define the concept of an application owner as Microsoft often uses this term in presentations and documentation. Here’s one definition but essentially it’s one or more people in the business that rely on and define the business needs of a particular application and communicates this information back to IT so they can provide the right service. So the idea isn’t that Jane in Accounting can spin up her own SharePoint VMs because she’s bored one afternoon, but rather to minimize the friction and lost communication between business and IT. It’s in this context that App Controller fits – as a way for these people to interact with resources (applications, services, VMs etc.) in a delegated, self-service manner.

In practise App Controller is a Silverlight based, IIS hosted website with an underlying SQL database that connects to one or more Virtual Machine Manager (VMM) clouds and one or more Windows Azure subscriptions – in a delegated and secure way.

Unlike other members of the System Center (SC) suite, installing App Controller is a fairly quick and easy affair. You need a SQL Server 2008 R2 or SQL Server 2008 with SP2 database, either in x86 or x64 flavour. The server OS has to be Windows Server 2008 R2, preferably with 4 GB of memory (minimum 1 GB), it also needs .NET Framework 4.0 and the IIS role (both will be setup by the installer if you haven’t done so previously). If you want to connect App Controller to Virtual Machine Manager 2012 (VMM) private clouds you’ll need to install the VMM console (not the full server) on the App Controller server.

The thing that App Controller SP1 will have in common with all the other applications in the SC suite is that they’ll run on Windows Server 2012 with SQL Server 2012 as the database.

Connecting to clouds in App Controller ^

Once you’ve installed App Controller you’ll need to connect it to your VMM clouds and / or Azure subscriptions. For the former you need the server name and a port (the default in VMM is 8100) and of course your user account needs to have been delegated access to one or more clouds in VMM. There’s a tick box in the connection screen; Automatically import SSL certificates that should be selected – this allows you to copy needed files and templates to and from a VMM server. This also enables you to copy resources between different VMM server environments / libraries easily – something that enables the IT process of moving a service from development to test to production for instance. 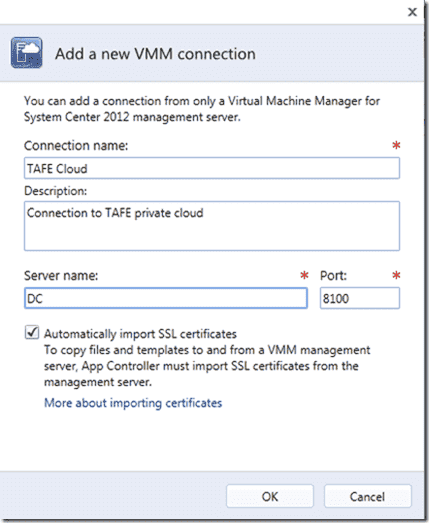 Setting up connections to VMM clouds is easy, as long as you’ve been given the right permissions.

Today you can’t define a service in VMM or Windows Azure that spans both clouds, so you can’t define a service template in VMM that also creates VMs in Azure at deployment time. The VMM server and App Controller server needs to be in the same domain or in domains with two-way trust established. It’s also strongly recommended, although not required, that a VMM administrator is also an App Controller administrator.

In the next part we'll cover the integration of App Controller with Windows Azure.