Wolfgang Sommergut  Fri, May 15 2015Fri, Nov 17 2017  powershell, powershell beginner  20
The processing of strings is one of the most common operations in scripting languages. Traditional tools such as batch files or VBScript can only cope with these tasks in a rather awkward way. In contrast, PowerShell offers the complete arsenal of string manipulation functions that you might know from PHP or JavaScript.

It is important to understand that strings in PowerShell are always objects, whether you are dealing with literal strings or variables. Consequently, the methods of string objects provide most of the functions you need. As usual, you can display them with the Get-Member cmdlet.

However, some tasks require the use of operators. For example, PowerShell doesn’t have a concat function. Instead, you can just concatenate two or more strings with the plus operator:

Alternatively, you can expand the two strings within double quotes:

In the example, the space guarantees that the two words don’t stick together. However, you could insert any other delimiter. 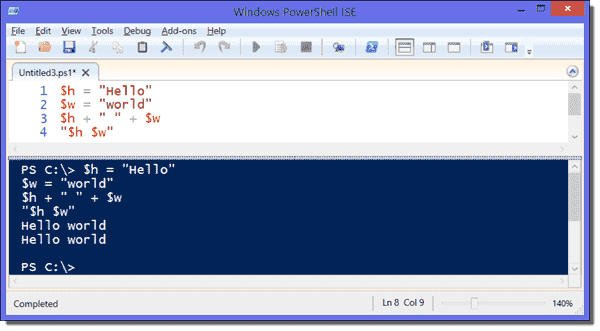 This method is also suitable for concatenating the elements of a string array:

Another option for concatenating strings is the join operator. Its usage is perhaps a bit counterintuitive. Normally, you place the operator in front of the string unless you want to separate the strings with a delimiter after the merge:

If you don’t like the result “Helloworld” in the example and you want to add a space between the two words, you have to call -join this way:

For the opposite task (that is, for splitting strings), you can use either the split method or the split operator. The former is simpler and only allows for use of explicit delimiters; the operator, on the other hand, supports regular expressions.

In the following example, the string is split at the double “ll” and at the space. The delimiter itself falls by the wayside:

You can specify the maximum number of substrings in which the string is split. PowerShell will then produce an array with the corresponding number of elements:

The result array in the above example has two elements.

The method Substring has a similar purpose because it can extract a part of the string. However, instead of using delimiters, you have to specify the position and length of the string that you want to extract:

This command results in “llo w”, which corresponds to the substring with a length of five characters that begins at the third character (counting begins at 0!).

The counterpart method to Substring is Remove. It deletes the specified range from the string:

In this example, “llo” is removed from “Hello world.”

To eliminate leading or trailing spaces, you can use TrimStart, TrimEnd, or Trim.

PowerShell knows a variety of techniques to find and replace substrings. For the more demanding tasks, regular expressions are available, which can be applied with the -match or -replace operators.

In addition, the string object offers several methods for this task. Of course, each of these methods has its specific purpose. Replace is the simplest of these methods and doesn’t support regular expressions.

A counterpart to the -match operator doesn’t exist. However, PowerShell supports several methods that specialize on a particular search type. For instance, StartsWith and EndsWith determine whether a string begins or ends with a certain character or string, respectively. Likewise, Contains tells you if a string contains a certain substring:

The above command results in True. To calculate the position of a character or substring in the string, IndexOf is at your disposal:

Don’t forget that counting starts at 0! 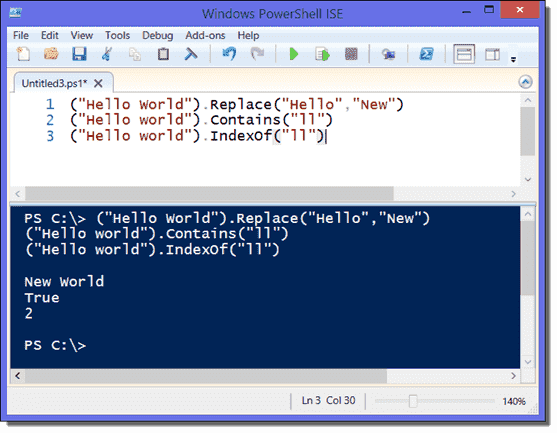 Searching and replacing characters in PowerShell

In general, you can work with the same comparison operators as for numerical values to determine differences between strings. Primarily, this includes -eq and -ne, as well as -like, which supports wildcards.

In the above example, CompareTo returns 0 because the strings are identical. In contrast, the comparable call with Equals returns True: