Start menu vs. Start screen – Why Microsoft must dump the desktop

Home Blog Start menu vs. Start screen – Why Microsoft must dump the desktop

Michael Pietroforte  Tue, Oct 7 2014Tue, Oct 7 2014  windows 10, windows 8, windows 8.1  39
Microsoft listened to complaining customers and reintroduced the Start menu in Windows 10. A wrong decision! The discussion in my recent post about the Start screen in Windows 10 and Tim’s text about the Windows 10 Start menu inspired me to write this article, where I summarize some of my claims and introduce new arguments for the Start screen and against the Start menu. In fact, I feel it is time to dump the desktop altogether.
Contents

The debate about the Start menu and Microsoft’s to-and-fro strategy demonstrates the internal division of forces in Redmond. Many want to move ahead and leave the old Microsoft behind, but obviously there are also many conservative holdouts who are afraid to snub and drive away loyal customers. It is definitely more than just a discussion about the question of how apps should be started in Windows—it is a landmark decision. 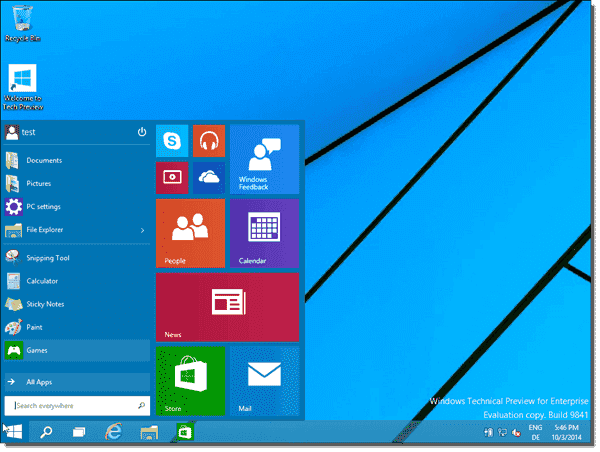 The Start menu in Windows 10

First of all, I have no doubt that the majority of Windows users hate the Start screen, and many also dislike the Modern UI as such. However, the discussion here on 4sysops made it obvious to me once more that people don’t really know exactly why they dislike the new UI. 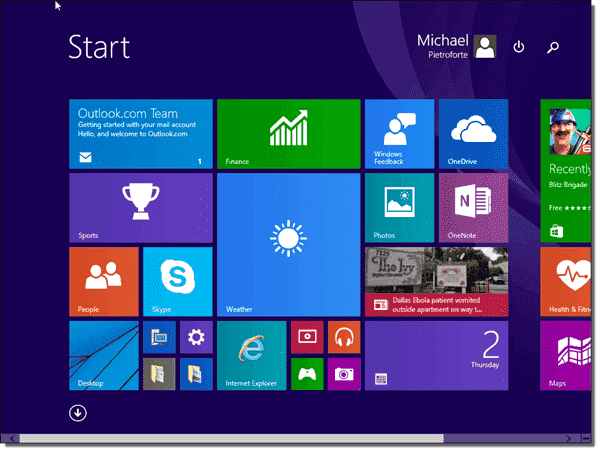 The Start screen in Windows 10

I like Grant’s picture of barking dogs. Yes, many Windows users barked at Microsoft after the release of Windows 8. Dogs usually bark when they feel uncomfortable and when they are afraid. Humans are not that much different. The only difference is that humans have to explain their barking, and, if they don’t find a good explanation for their negative feelings, they start to invent reasons.

I think some of these explanations are pretty close to the real problem with the Start screen, but many are just made up. (If you support one or more of these views, no offense. Prove me wrong in a comment below!) They are not made up in the sense of lies. Many users feel uncomfortable with the Start screen and don’t really know why. When you force them to give an explanation, they invent reasons that they truly start to believe once they are uttered. Of course, this a well-known psychological phenomenon and can easily be explained by how the human brain works.

This leads to the question of exactly why people feel uncomfortable with the Start screen and the Windows 8 UI. The easiest explanation is the claim that they fear change. We are living in a fast-changing world, and many have problems accepting this. Any additional change causes fear and is rejected. Humans and dogs bark when they feel fear. This is the simple explanation—the one I use often. However, in case of the Start screen, things are a bit more complex.

One observation I made is that many iPad lovers hate the new Windows 8 UI. It is not that they are just Microsoft haters. They are working with Windows every day and they just want it to stay how it is. At least, this is what they say. However, the fact that they accepted the touch UI of the iPad shows that they are not afraid of change. Many Start screen haters can easily embrace new technologies.

So what is it, then, that forward-thinking people dislike about Windows 8? The first time I realized what went wrong with Windows 8 was when a friend of mine started complaining about her brand new Windows 8 laptop. She asked me to install Windows 7, which I declined because she wasn’t able to give a reason (not even a made-up one).

After her computer was upgraded to Windows 8.1 Update, I suddenly heard her say, “I like my computer now.” At first I thought she was talking about the hardware. I couldn’t believe that the Start button made her say this. And no, it wasn’t the Start button after all. She just discovered that she can have the same background on her Start screen as on the desktop. This was enough. She was used to the background picture, and the Start screen now felt to be more a part of the computer. The entire UI somehow looked more coherent. For the first time, she tried some of the new Windows Store apps.

Desktop background on the Start screen

I don’t want to say that setting the same background for the desktop and Start screen fixes Windows 8. The main problem about Windows 8 is that two different UIs live side by side. Of course, this point has been put forward many times, and many of the changes since the release of Windows 8 were an attempt to smooth the edges where the two UIs collide.

However, many of those changes focus on functionality. It appears Microsoft believes those made-up reasons that they hear from Windows users. The Start menu is the most typical example. But the real problem has little to do with functionality and productivity. It is all about the look and feel of Windows 8. Switching between those very different UIs makes people feel uncomfortable. It is like when you see someone wearing a checked shirt with striped pants. If you are not an eccentric person, you will think this guy has bad taste, and you will even start disliking him without exchanging a word.

Microsoft is probably also quite aware of the design problem. However, with Windows 10, Redmond moves partly in the wrong direction. Instead of making Windows 10 look more like Windows 7, they should get rid of the old UI as fast as possible. Microsoft needs to dump the desktop! I strongly believe that doing so would have the same emotional effect on people. Once everything looks coherent, people will accept the new UI and they will also love the Start screen.

The Start screen is technologically superior to the Start menu simply because it uses the entire screen for an important task, such as searching for an application. Can you imagine searching in Google or Bing by using just a tiny space of your browser window? You can try just that in the Windows 10 Start menu. It’s awkward!

Having said that, instead of reverting everything back in Windows 10, Microsoft should move forward and tackle the next step in the transition to a new UI. It just doesn’t make sense to have two different kinds of spaces (desktop and Start screen) where users can place shortcuts to apps. Of course, backward compatibility is important. And future Windows versions have to support legacy desktop applications for a long time.

The solution to the context switch problem would be to keep the Start screen in the background whenever you start a legacy desktop application—that is, don’t switch the UI back to desktop mode. I am confident that, once the entire UI is coherent, at least the forward-thinking users will embrace the modern touch style.

It is not the first time that Microsoft has moved to a new UI. When Windows was introduced, I heard a lot of barking from DOS users and, when Windows 3.11 was replaced with Windows 95, the barking was even louder. In both cases, Microsoft wasn’t intimidated by the yowling and growling and just moved ahead with confidence. This was the main reason that Windows 95 became such a big success despite all its stability and performance issues. We are talking about Microsoft’s best times here. 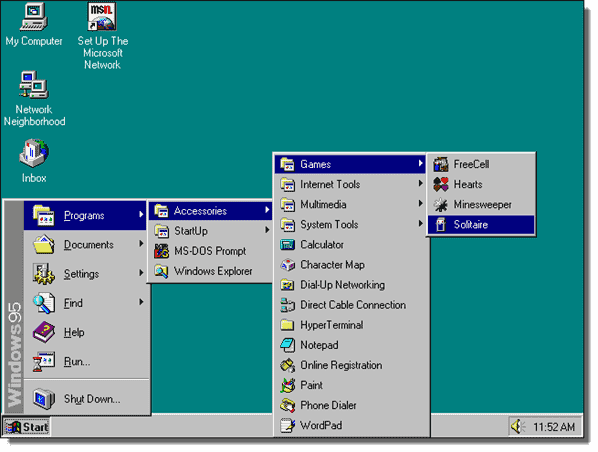 In Windows 95, Microsoft put the new UI into the foreground. The old UI was only supported for legacy applications. You could start DOS applications in the first Windows versions and, in Windows 95 when Microsoft again introduced a new UI, you could still run old 16-bit programs. Windows 95 also supported a real-mode MS-DOS environment that allowed you to run DOS applications that had problems with the new UI. Of course, you could also run DOS programs in the new graphical user interface. It is important to note that the old “Start tool,” the DOS prompt, essentially disappeared in the new UI right from the beginning. All these workarounds because of compatibility problems would be much easier to accomplish today because we now have powerful virtualization technologies. It wouldn’t be a big deal to completely move to the new UI and still support legacy desktop applications. 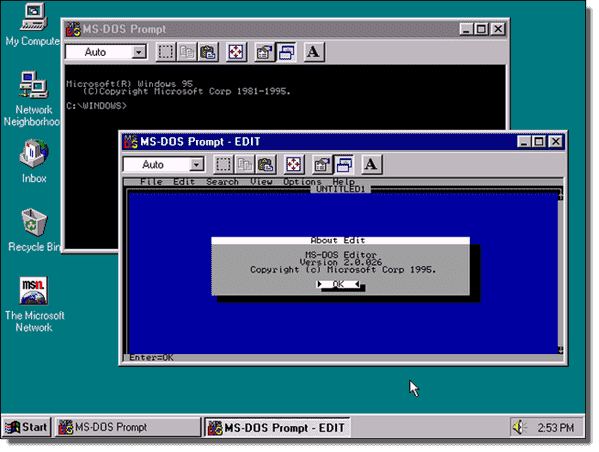 A DOS application running in Windows 95

Ballmer made a big strategic mistake when he released Windows 8 without a flank-securing new Office version for the modern UI, as Gates did with Window 95 and Office 95. This alone would have silenced many critics because Microsoft would have made it unmistakably clear that this is the new way to go and that there is no way back to the old UI. This misstep can only be explained by the fact that the Office team didn’t really know what the Windows team was up to.

Even worse was that the new UI was a mere byproduct to Windows 8, intended to make customers slowly get used to the Modern interface. This was exactly the wrong strategy. The real reason for all these complaints about Windows 8 is that those two different UIs just don’t fit together, and this makes users feel very uneasy. Steve Jobs would have said this hodgepodge of UIs is just tasteless. Never wear stripes and checks together. Never!

Now, you could propose that if Windows should have only one UI, why not get rid of the new one and stick with what we know? The answer is simple and well known. We now have new devices with new form factors that require a touch interface. Of course, Microsoft can’t neglect this market. The solution to use a touch interface on tablets and the old-fashioned Windows interface on PCs isn’t going to work either. It is a waste of resources for a software company that depends on a huge ecosystem to support two different kinds of operating systems with different user interfaces.

There is no doubt that the touch interface is superior to the old graphical interface, just as Windows was superior to DOS. Almost everything you can do with a finger can be done with a mouse. (The only exception is two-finger zoom.) Thus, it is possible to create a touch UI that can be conveniently used with a keyboard and mouse. However, you can’t build a mouse-centric interface that anyone would want to use on a tablet.

If Microsoft really reintroduces the Start menu in Windows 10, they endanger the future of Windows because it postpones once again the necessary (and admittedly hurtful) step to dump the desktop. There is absolutely no doubt that the future will be dominated by devices with touch interfaces. Microsoft must stop listening to barking customers and move forward with confidence. The only problem with Windows 8 was that it didn’t full-heartedly embrace the new UI; it was introduced with a shaky hand. Barking dogs only bite if they sense fear; they bite shaky hands.

What’s your view? Do we still need a desktop almost twenty years after Windows 95?