By now, I suppose every IT pro knows that, on Windows 8, two different kinds of computer programs can be installed: Modern apps and desktop applications. Modern apps were previously called Metro apps, but Microsoft had to stop using the term because the German Metro AG threatened to sue Microsoft. I guess many didn’t notice that Microsoft, meanwhile, also dropped the term “Modern apps” and talks now of “Windows Store apps.” Sometimes you’ll hear the terms “design language” and “design language UI,” which refer to the Modern UI. Most bloggers ignore the name and continue to use “Metro”. Even Wikipedia stick to the old term. On 4sysops, we usually just talk about Windows 8 apps, Windows apps, or just apps; “applications” will stand for traditional Windows desktop programs. 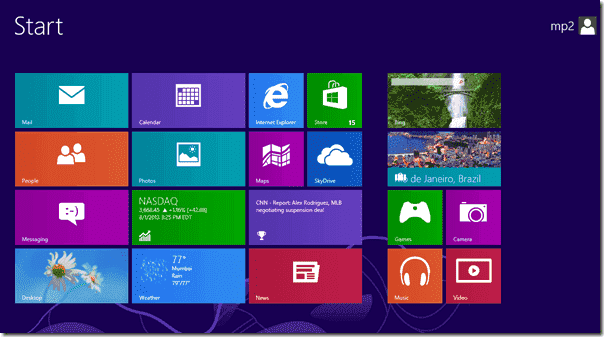 Sideloaded apps are Windows 8 apps that you can’t download from the Windows Store. You can either build those apps yourself or download them from third-party sites. Whereas some more patronizing OS makers don’t like you to sideload apps, Microsoft encourages businesses to use this feature. Sideloaded apps come as APPX files that have to be installed with PowerShell cmdlets and not through the Windows Store app.

LOB apps are Windows apps that are essential for a particular business. Companies usually create them in house or hire contractors to build them. In most cases, LOB apps are sideloaded and distributed with Microsoft deployment tools (Microsoft Deployment Toolkit, Configuration Manager). However, in theory, you can also deploy LOB apps through the Windows Store if you don’t mind that other organizations of your industry use your LOB apps.

If you right-click an empty space in the Windows Store app, a top app bar appears with a link to “Your apps.” If you use a local account, you will have to sign in with a Microsoft account. The Store app then lists the apps you own—that is, apps that are assigned to your Microsoft account. You can then display the apps that you have installed on other Windows 8 machines and download them from the Windows Store. 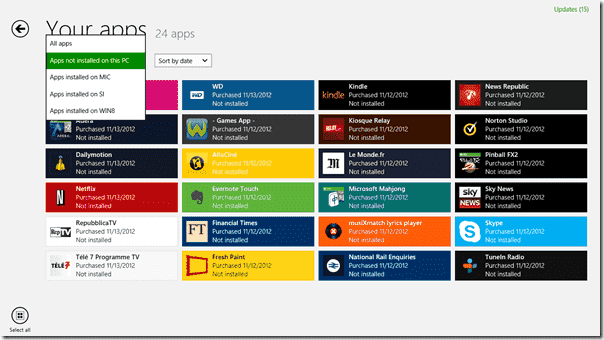 In the pre-cloud era, we installed applications on computers. Apps are different. Apps are still installed; however, in a certain sense, they are installed not on computers but for users. Sounds strange, but you will soon know what I mean. If you install an app from the Windows Store, it will only be available for your account. Other users on the computer won’t be able to run the app. Desktop applications are installed for all users on a computer, but you can remove the corresponding icons from their Start Menus. Although it is possible to share apps between multiple accounts, the procedure is rather complicated. Hence, whenever I talk about an installed app, I mean that the app is available for a particular user.

Built-in apps are the apps that Microsoft delivers with Windows 8. The apps to which the term refers depend on the Windows version. For instance, Windows 8.1 comes with different built-in apps than does Windows 8. Sometimes, “built-in apps” is used synonymously with “provisioned apps” because, in the vast majority of deployments, both names refer to the same set of apps. However, both terms not only have a different sense, they can also have a different reference.

Staged apps and provisioned apps always refer to the same set of apps. However, both terms have a different sense—that is, they are used in different contexts and, in my view, should not be confused. Whenever you provision apps to an image, they are staged in the image. Once the user has logged on, those staged apps become installed apps for that user. However, occasions exist when the state of an app is reverted from installed to staged, as we will see below. Of course, this doesn’t change the provisioned state of the app on the computer.

Whenever there are updates for provisioned and installed apps, Windows Update downloads them to the computer and puts those apps in a staged state. This means that, when a user updates the app through the Windows Store, the app doesn’t have to be downloaded and therefore installs faster. As you can see, “staged,” unlike “provisioned,” doesn’t necessarily imply that Windows automatically installs the program files when the user logs on. It is interesting to note that, if a user updates an app, the app is not updated for the other accounts on the same computer. Hence, two different versions of the same app can coexist on a computer. You may now agree with me that it doesn’t make sense to talk about installing or updating an app on a computer. Even if you update an app for all accounts that exist on a computer, you didn’t really update the app on the computer. The reason for this is because, if you create a new account, the old version (the provisioned app) will be installed at the first logon, and the user will work with the old version until the staged update is manually installed.

“Locally stored apps” is another term that I made up myself. Whenever you install an app from the Windows Store, it is stored locally but it is only installed for your account. However, I assume (but didn’t verify) that the Windows Store app won’t download again if another user on the same PC installs the app. Locally stored apps are different from provisioned apps because they won’t be installed automatically when a new user logs on the first time.

I am unaware if Microsoft uses other names for permanent and locally stored apps. If you have heard of such terms, please let me know.

Did I forget any Windows 8 app terms? Ah, yes, some mischievous people talk of toy applications—yet another expression for Windows 8 apps. 😉 Anyway, even though apps are usually relatively simple programs, you saw that things are a bit more complicated with Modern apps than with old-fashioned desktop applications (or shall we say legacy applications?). You didn’t really believe that the cloud makes things easier for admins, did you?