Brandon Lee  Wed, Nov 30 2022Wed, Nov 30 2022  networking, windows server  0
It is common for organizations to host websites and other resources that may be accessible from external and internal clients on the LAN. Traditionally, organizations may have maintained two different DNS servers for this reason. Microsoft's split-brain DNS deployment using DNS policy helps consolidate these resources using Active Directory-integrated zones.
Contents

Microsoft defines DNS deployments as being split-brain when two different versions of a single zone exist on DNS servers. But how can you have traffic from one source pull records from one zone and another source from another zone? Starting with Windows Server 2016, Microsoft has added the ability to create DNS policies for split-brain deployments. 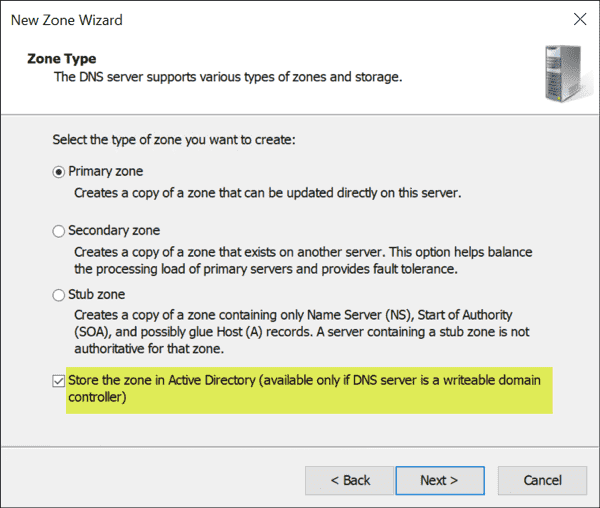 DNS servers can now evaluate DNS requests based on the configured policies. For example, if a request comes across a specific interface, it can be matched with a policy that associates the query with a certain zone.

If you have a DNS server with two interfaces, one with a public address and the other with a private address, your policies could be defined as follows:

The split-brain DNS solution uses what is called a zone scope. It can contain its own set of resource records, which are presented to the corresponding set of DNS clients based on IP subnets.

Now that we have an additional zone scope for external users, we need to assign records to both the external and internal zone scopes. You can do this using the following command:

Adding records to each zone scope

Now, we need to create and apply a DNS policy to the server interface that we want to associate with a respective zone scope. Using the ServerInterface parameter, we tie the IP address assigned to the interface associated with the zone scope and the DNS zone it will serve. Note the example below:

The leading "eq" in the ServerInterface parameter value stands for the equals operator. Alternatively, you can use "ne" for not equal. It is possible to combine both to refine the targeted interfaces:

You can pass several zone scopes to the namesake parameter. The numerical value following the name specifies its respective weight.

While the DNS zone and DNS zone scopes are Active Directory-integrated, the policies are not. This means that they are not replicated to other DNS servers. Instead, you will need to manually export DNS policies from one server to another and store these on each local DNS server.

The split-brain DNS deployment using DNS policy is an interesting capability found in Windows Server 2016 and higher. It allows organizations to consolidate their external and internal DNS infrastructure.

However, it is disappointing that the DNS policies are not Active Directory-integrated, like the DNS zones and zone scopes. Additionally, external queries of Active Directory DNS servers may not align with strict security policies for the DNS infrastructure.