Some more thoughts about the Windows 7 taskbar, a.k.a. Superbar

Home Blog Some more thoughts about the Windows 7 taskbar, a.k.a. Superbar

When Windows 7 was still in beta, I asked 4sysops readers about their opinion on the new taskbar in Windows 7, a.k.a. Superbar. At the time I wrote the article, I was not really convinced of the value of this new feature, but I needed more experience. Using such a feature on test systems is quite different from working with it in a productive environment. I have been using Windows 7 on my laptop for a while, and my final verdict about the Superbar stands now. I also want to share how I use the Windows 7 taskbar.

I think, this is an important topic, especially for IT pros, because we usually work with many applications simultaneously and switch between tools all day. Hence, finding the best method to switch tasks can increase your productivity significantly, even if the time needed to change from one tool another is only a second. These seconds add up over a long work day. Even more important is the fact that switching quickly between applications is essential for keeping your focus. If you need two seconds or more to switch between apps, then this will certainly have a negative effect on your concentration and will tire you out quickly. 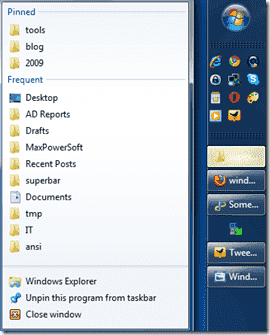 Let’s start with what I like about the Windows 7 taskbar. The new feature I like most is the Jumplists (right click on an icon on the taskbar). I hopelessly underestimated the value of the Jumplists at first. This thing is really a time saver. For example, you can pin folders to the Windows Explorer icon, which allows you to jump to a particular directory very quickly. Also useful, the Word icon displays the last documents opened. You can also pin documents to the Jumplist. I find myself using this feature all day. I am sure that ISVs will find many helpful ways to make use of this function and I believe that this will turn out to be a killer feature in the long run.

I also found that pinning icons to the taskbar has one big advantage: The relative position of the application in the taskbar always stays the same. After a while you get used to the position, which allows you to locate an icon quicker than in Vista or XP.

The only problem is that not all the apps I need for my daily work fit on the taskbar. This is why I’ve only pinned the most important tools. All apps that can be minimized to the Systray are banned from my taskbar. To be able to launch these tools quickly, I revived the good old Quick Launch bar. The Quick Launch bar also handles those tools to which I only have to switch every now and then since they have no fixed position in the Taskbar once they are launched. If I need more space on the Taskbar, I can just close them.

The taskbar feature I dislike the most is that windows of the same application are combined. To move the mouse first to the application’s button and then search again for the right window in a long list of much-too-small thumb previews is an absolute time killer. I have seen people doing this in presentations and I always wonder how they can be so patient as to allow three seconds or more just to switch to another window in the same application. This would drive me nuts. I’ve also seen, more than once, that people lose concentration just because of this.

Our short-term memory only has a very low capacity (up to five items) and lasts only a few seconds depending on the type of content. Yes, these thumb previews look absolutely cool. This was the reason why I expressed a liking for this feature in my first review. But after working with these thumbs for some time, I’ve come to the conclusion that they are useless.

It is possible to disable the combining feature, which I highly recommend. It makes sense to combine taskbar buttons only when the taskbar is full. This is at least better than working with two taskbars. However, every time Windows starts combining taskbar buttons, I find myself looking for apps I can close for the time being. This is certainly not very productive, either.

Therefore, the new taskbar works great for me as long as I don’t have too many apps open. The smaller the screen I’m using, the more problematic this downside of the Windows 7 taskbar becomes. Since most of the time I’m working on a laptop, I can’t really say that the Superbar is "super". At best, I’ll let myself be carried away to say that it is a Nicebar.

But there is a better way to switch tasks. This will be the topic of my next post.