Michael Pietroforte  Fri, Nov 6 2015Thu, Dec 17 2015  browser, deployment, windows 10  53
You can set Internet Explorer, instead of Edge, as the default web browser in Windows 10 with Group Policy. With the help of Dism, you can also set IE as the default browser in your reference image. However, this alone is not enough to ensure that users always work with Internet Explorer.
Contents

In a previous post, I explained how you can uninstall IE in case you only want to ensure that your users only use Edge to access the web. In another post, I described how you can work with Enterprise Mode Site List Manager to ensure that Internet Explorer is used for particular web pages and web apps.

However, I believe that many admins will pursue another strategy and continue to count on Internet Explorer in their network. Internet Explorer is a well-tested browser that offers maximum compatibility and is highly customizable with more than 1,600 Group Policy settings.

Edge, on the other hand, is a truly Spartan browser that currently offers only a handful of Group Policy settings. If you move to Edge, you have to inform users about the new browser, ensure that favorites are imported properly, and then hope that the new browser won’t bump into web applications that were developed for previous Internet Explorer versions. Perhaps you just don’t want to demand too much from your users and allow them to keep working with Internet Explorer until everyone is used to Windows 10.

Setting Internet Explorer as the default browser has two effects. First, whenever a user clicks an HTTP or HTTPS hyperlink in a document (in Word, for example), Windows will launch Internet Explorer instead of Edge. The second effect is that local HTML files will be opened in IE.

Set Internet Explorer as the default browser via Group Policy 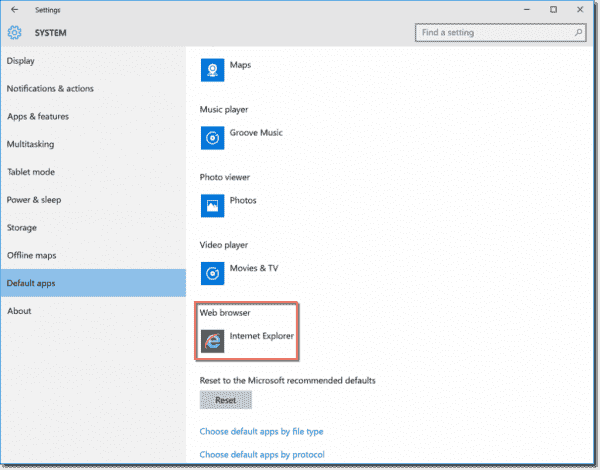 Setting Internet Explorer as the default browser in Windows 10 Settings

Next, you have to export this setting to an XML file with the Dism tool that is shipped with Windows 10:

This commands exports all file associations on your reference computer to an XML file on a network share. Thus, you have to make sure that you didn’t modify other app associations that you don’t want to deploy in your network. By the way, you can also use the method described here to set Chrome or Firefox as the default browser.

Next, you can deploy this XML file with the Group Policy Set a default associations configuration file, which is located in Computer Configuration > Administrative Templates > Windows Components > File Explorer. Unfortunately, no user configuration exists for this policy. 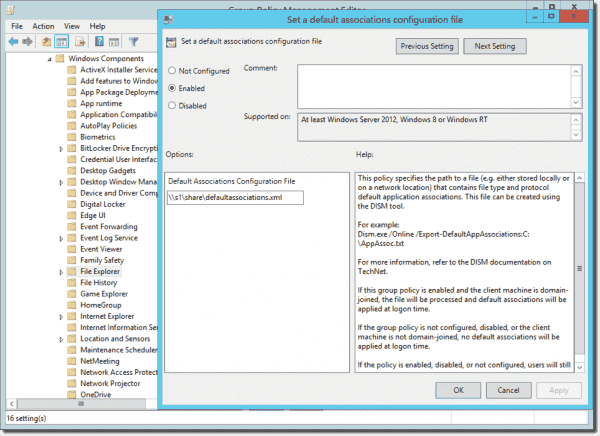 Set Internet Explorer as the default browser in a WIM image

You can also easily modify your reference images with Dism before you deploy Windows 10. You can use the same XML configuration as for the Group Policy. If you are responsible for OS deployment in your organization, you probably know how to modify WIM images. After you export the default file associations, you have to mount your WIM image, import the configuration, and then write the changes to the WIM file: 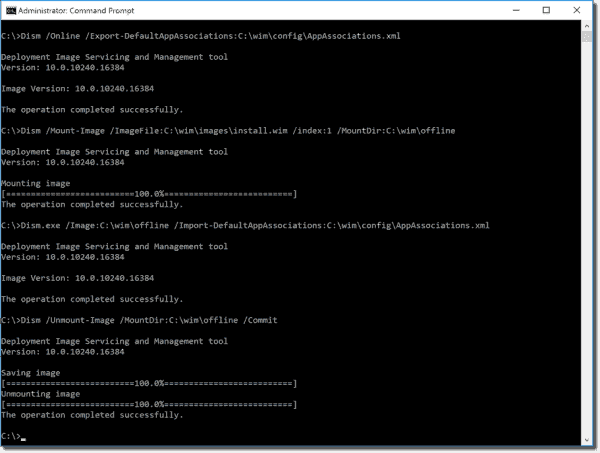 Perhaps you want to verify that the changes have been applied to your image. You can do this with this command before you unmount the image: 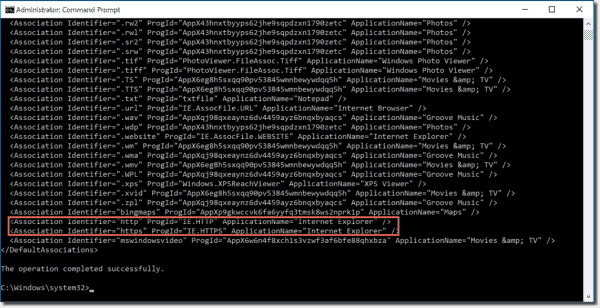 Internet Explorer is the default application for http and https

Remove Edge from taskbar and Start

If you want to prevent users from working with Edge, you have to remove its icons from the taskbar and from the Start menu.

Unfortunately, no straightforward way exists to configure the taskbar via Group Policy. One way to get rid of the Edge icon on the taskbar is to unpin Edge on a reference machine, export the Taskband Registry key (HKEY_CURRENT_USER > Software > Microsoft > Windows > CurrentVersion > Explorer > Taskband) to a REG file, and convert the REG file to an XML file that you can then import into Group Policy Preferences (User Configuration > Preferences > Windows Settings > Registry).

This method allows you to deploy a specific taskbar configuration. However, when I tried to pin Internet Explorer to the taskbar and deploy the corresponding Taskband setting, the link in the taskbar no longer worked. (Update: See comment bellow.)

A problem with this method is that users can’t pin their apps to the taskbar. This also applies to the Remove pinned programs from the Taskbar Group Policy, which you can find in User Configuration > Policies > Administrative Templates > Start Menu and Taskbar. 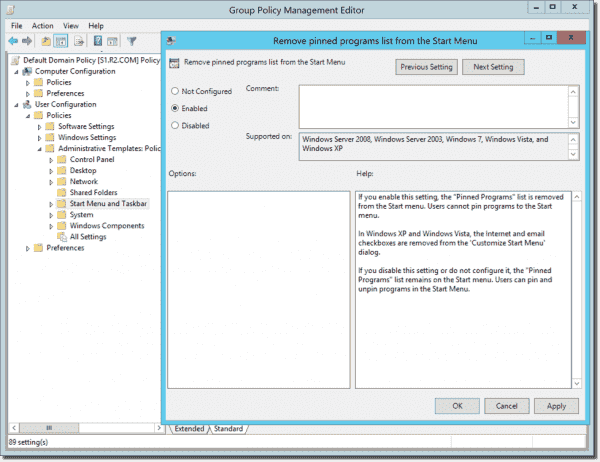 Removing pinned programs from the taskbar

Things are bit easier with the Start menu if you are working with Windows 10 Enterprise. You can configure Start on a reference computer, export the configuration to an XML file, and deploy it via Group Policy. Even though the policy description doesn’t mention Microsoft’s latest OS, the policy works fine on Windows 10. I’ve described the method in detail in a previous blog post.

Microsoft tries hard to make its customers work with its latest software. Even though I always recommend adopting new technologies as fast as possible, I know that not all organizations can move at the same pace. Thus, I wish Microsoft would offer just one simple Group Policy setting that allows admins to set the default web browser, including the corresponding modifications to the Start menu and the taskbar. One way to avoid all this trouble is to work with the Windows 10 Enterprise LTB because this Windows edition comes without Edge.