Service Pack 1 for Windows Server 2008 released? How worried is Microsoft?

At first, I thought, it is some kind of joke. But then I read it on several sites and even on a Microsoft blog. Windows Server 2008 SP1 is released. Yeah right, it was released together with Windows Server 2008 RTM. The good thing is we don't have to wait so long for this SP as we waited for Vista SP1. The bad thing is I am deeply confused as to what is going on at Microsoft at the moment.

Iain McDonald, Director of Project Management for Windows Server, tries to make sense of all of this. If you are a historian whose field of specialty is Microsoft's service packs, then you probably will scarf down this post. If you are just a Microsoft customer, then, you'll be even more confused after reading this. Actually, there is no explanation in this lengthy post at all. 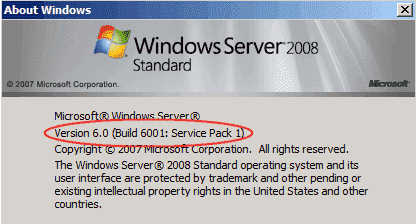 While this naming might make sense from a developer's point of view, it is certainly the strangest thing Microsoft ever did regarding product names. What all this shows is that speaking of service packs doesn't make sense at all anymore. Why don't they just call this thing Windows 6.1 Server?

But perhaps there is something different behind this. In many IT departments, it is an unwritten law that one always has to wait for the first service pack before you can even start thinking of deploying a new Microsoft OS. Do they want to make us believe that there is no reason to wait for the first service pack because it is already released? It is hard to believe that this could really work. For me, it seems as if MS is actually pleading that Vista and Server 2008 are really really ready for prime time now.

If this is  just one incident, it might not be worth mentioning. But the confusion about release dates continues. First, they make this big secret out of the release date of Vista SP1, downplaying its importance by telling us that we have Windows Update anyway. Then it turns out that Vista SP1 contains 390 hotfixes that were not published before. Every week a new release date was passed round. Then suddenly they announced that it is released to manufacturing, but tell customers that it is not yet released to the public, but will be released in Mid-march. A few driver issues with SP1 made Microsoft's decision makers quite nervous. Some days later, they released it anyway for business customers because they got again a public scolding. And now they release Server 2008 SP1 even before anyone gets the chance to ask when the first service pack will be released. Too many release dates for my taste.

Is it because the big bosses at Microsoft are too busy chasing Yahoo? Or are they super nervous because of the bad public opinion of Vista? Or perhaps, it is because they are worried to be without Bill Gates now? I hope it is not the latter; otherwise I might have to change the motto of my newly designed logo soon to "For Linux admins". 😉