Coming in SP1 for Service Manager is the concept of chargeback / showback along with full integration with VMM for this, along with rich reporting. For private clouds this functionality is a big help for IT departments to really show each part of the business what it costs to run and maintain their resources and that oversubscribing and underutilizing really isn’t viable for the business as a whole.

The administrator defines a price sheet or rate card for each cloud managed through VMM to adapt to different SLAs. Because SM creates a Configuration Item (CI) for each part of your VMM fabric it “knows” what resources are being used by what loads, through the Operations Manager integration.

There’s a sample ChargebackReport.xlsx included but custom reports will be easy to build off the OLAP cubes in SM.

Similar to what’s coming in VMM; App Controller lets you upload virtual hard disks or images to Azure, add VMs to a deployed service in Azure as well as start, stop and connect to VMs running in Windows Azure. Further you can migrate (but not Live Migrate J) a VM from VMM to Windows Azure.

The biggest potential change however is the integration of the Service Provider Framework (SPF) which will let you manage resources hosted in third party clouds. The latter is secured using certificates; the current (CTP 2) manual process for managing them is a bit clunky and we hope Microsoft streamlines this in a future milestone. 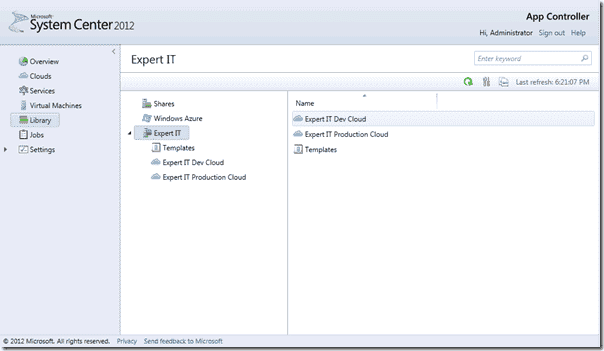 SP1 in App Controller in many ways rides on the changes in VMM and the addition of the Service Provider Framework.

SPF is part of the overall vision for SP1 – enabling third party hosters / public cloud providers to use SC 2012 to manage their infrastructures easily. Essentially it exposes VMM infrastructure as a web service letting them easily build (web) interfaces that control VMM. The web service supports REST based requests using the OData protocol.

Whether this will be successful with public cloud providers remains to be seen but there’s no doubt that Microsoft has a very capable platform in Hyper-V 3.0 together with SC 2012 SP1.

Orchestrator brings no new features in SP1 (except support for SQL 2012 and Windows Server 2012). Overall though it’s clear that System Center 2012 SP1 will bring enhancements to the value proposition it offers, whether you manage a traditional data centre, a virtualized infrastructure or private / public clouds.