Server Core: How to install the VMware tools and solve the jerky mouse pointer problem 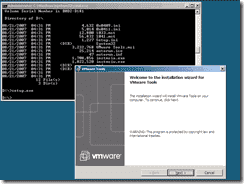 To install the VMware tools on a Windows system with GUI, you just have to right click on the tab of the virtual machine and click on “Install VMware tools”. VMware will then launch the VMware tools setup wizard which guides you through the installa tion process. If you do this under Server Core, nothing happens at first.

The trick is to switch to your DVD drive (usually D:) and then launch “setup” manually. The wizard will show up then. However, after starting the installation, setup will hang and an error message will be displayed: Error loading tpvmmon.dll. I didn’t see the message at first because it was hidden behind the wizard. I just ended this Run.dll task with the task manager (press CTRL+INS). The installation wizard continued then. Thus far the VMware tools seem to be working, properly.

I am running VMware Workstation on a server and I usually access its console via RDP. This works fine except that the mouse pointer is quite jerky then. Gianni explained in a comment how to solve this problem with Windows Server 2008 as guest OS and I outlined the same for Windows XP and Windows Server 2003. Basically, one has to disable the shadow of the mouse pointer and set “hardware acceleration” for the display adaptor to “full”. But how can you do that if you have no graphical user interface?

Well, you have to mess around with the Registry. You can launch the Registry editor on the command prompt by typing “regedit”. Then you navigate to
HKEY_LOCAL_MACHINE\SYSTEM\CurrentControlSet\Control\Video\{81E0A29D-B654-4848-9421-BEA1C8A6F938}\0000
The long number is a GUID and it will be different on your system. You will find several such long numbers in the Video folder. However in my case there was only one which contains the Acceleration.Level key in the 0000 folder. You have to set the Acceleration.Level key value to 0.

Next you can disable the mouse pointer shadow. To do so, navigate to
HKEY_CURRENT_USER\Control Panel\Desktop
and change the UserPreferencesMask key value to 90 12 03 80 10 00 00. Now you have to reboot Server Core (shutdown -r on the command prompt). Note that this only works if you already installed the VMware tools.

I think, Registry hacking will become quite popular under Server Core. One way to find the Registry keys to change a certain setting under Server Core is to monitor a standard Windows Server 2008 installation with Microsoft’s Process Monitor. You have to set the filter to “Operation contains RegSetValue”, so only Registry changes will be displayed. Then, you configure the setting using the Windows Server 2008 GUI. I suppose that in most cases those settings will also work on Server Core.