Paul Schnackenburg  Thu, Jul 18 2013Fri, Jul 19 2013  hyper‑v, windows server 2012 r2  0
Less than twelve months after the massive release that was Windows Server 2012 Hyper-V the preview of 2012 R2 is here. This time around the changes aren’t quite as massive but still go way beyond what one would expect in this short time

In this three part series we’ll look at all new and improved features and how they fit into common business scenarios. In part 1 we’ll cover Generation 2 VMs, enhanced VM interaction, automatic activation of Windows VMs and zero downtime upgrade scenarios. 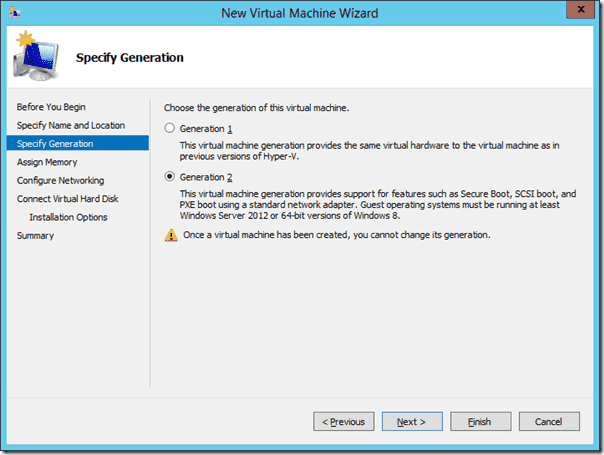 Picking the generation of your VM is easy, just make sure the guest OS supports living in a Generation 2.

The new Hyper-V brings the option to create a Generation 1 or Generation 2 VM. The former is the same VM type that we have today, whereas Gen 2 is based on a UEFI. Generation 2 is only supported by Windows 8 / 8.1 and Windows Server 2012 / 2012 R2 as the guest OS but is clearly the way forward. The main difference is that with UEFI, Secure Boot is now an option (and the default) and there’s much less emulated hardware.

If you look at Device Manager in a VM today there’s all sorts of PS/2 ports, serial ports and other devices that have to be emulated so the VM “thinks” its running on physical hardware. A Gen 2 has much less emulated hardware because the guest OS understands that it’s running in a VM. There’s no performance increase for a running VM but Gen 2 lets you boot from a SCSI VHD(X) so IDE is no longer necessary, it also boots about 20% faster and installs the OS up to 50% faster. The normal synthetic NIC also supports PXE booting so if you’re using WDS to install the OS you no longer have to futz around with the legacy NIC first, install the OS and then switch to a synthetic NIC for performance. 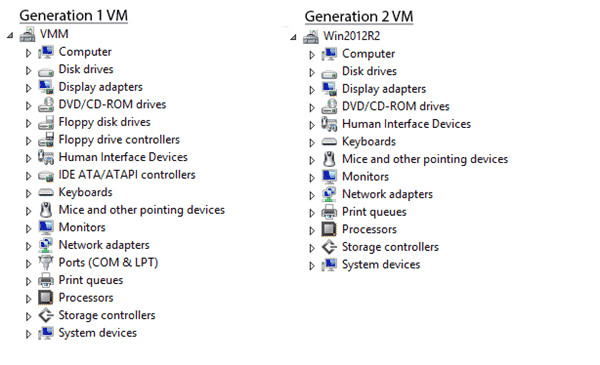 The work for the Hypervisor is a lighter in a Generation 2 VM simply because there is less hardware to emulate.

Many people have been frustrated with the limitations on interacting with a VM through the VM console, which only permitted copy and paste of text. Settings up RDS connections to your VMs alleviated some of these issues but of course that doesn’t work until the OS is up and running and doesn’t work at all for non-Windows VMs.

Now you can optionally enable enhanced VM interaction (not suitable for a multitenant or highly secure environment obviously) which provides full sound, picture, files and folder copy as well as rich text copy and paste in and out of VMs. It also provides smart card, folder and USB redirection, working exactly the same way as the RDP protocol (which it is in fact using behind the scenes).

While the Standard edition of Windows Server only gives you two Windows VM licenses for free, Datacenter provides for unlimited Windows VMs. In 2012 and earlier however you still need to enter a key and activate each VM manually. Now with 2012 R2 Datacenter and only for Windows 2012 R2 guests VMs they will automatically activate as long as the underlying host is activated. The type of host license (VL, OEM etc.) doesn’t matter, as long as the host is activated, any R2 VM running on it will be activated.

The ease of upgrading ^

With 2012 R2 following so hot on the heels of 2012 a complicated upgrade process would slow down adoption so Microsoft provides a neat solution – cross version Live Migration (LM). Simply connect your new environment to the old one and you can LM VM’s from 2012 to 2012 R2 with no downtime. For more in-depth information see this session from TechEd NA 2013.

My next post will discuss Live migration, Linux, and Replica.