Selecting products in WSUS for Windows 10

Wolfgang Sommergut  Mon, Oct 29 2018Wed, Oct 31 2018  deployment, patch management, wsus  4
If you want to distribute updates for Windows 10 with Windows Server Update Services (WSUS), you will find a long list under Products and Classifications for this OS. The lack of documentation does not make it easy to make the right choice.

While Windows 7 has only two options (Windows 7 and Windows Embedded Standard 7), the number of products you could subscribe to in WSUS for Windows 8.1 has risen to seven (including RT). With Windows 10, the list you can now scroll through is almost two pages long.

The rule to follow here is to avoid getting updates you don't need on the target PCs. This will reduce space consumption and network load caused by the downloaded files. Superfluous updates also increase the maintenance effort for WSUS if it's necessary to clean up these updates frequently. 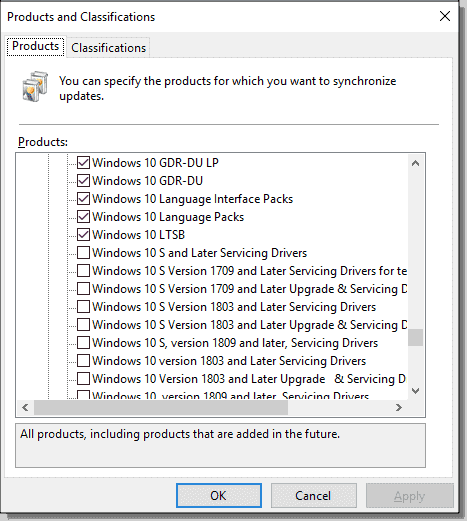 In most cases, you can deselect updates for Windows 10 S

However, it's not so easy to identify unnecessary updates in Windows 10 due to its large number of products available and their lack of documentation. Applying filters based on Windows editions would perhaps be the easiest way to start. If you're not using Windows 10 S or Windows 10 LTSC (still called LTSB in WSUS), you needn't check the respective boxes.

Another way to limit the number of subscribed products is to look at the Windows 10 releases. For example, if Windows 10 1709 is already running on the computers, you can ignore everything that refers to Anniversary Update and Later or Creators Update and Later.

It is obvious that selecting Windows 10 refers to updates applicable to all versions of Windows 10. The same applies to Windows 10 and Later Drivers, generally used to subscribe to drivers for Windows. 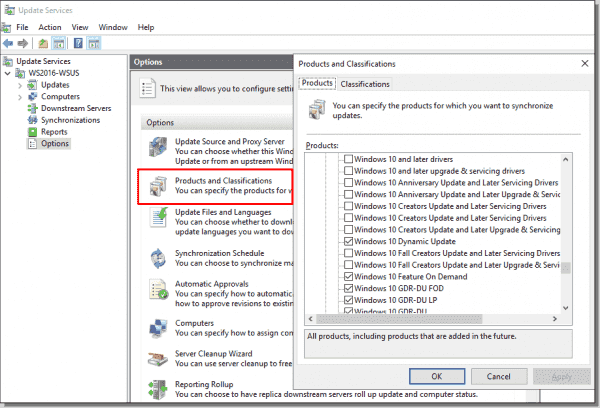 Things are made more complicated by the fact that there are products for drivers in addition to the driver classification. As it is generally not a good idea to receive drivers via WSUS because of the sheer volume and enormous redundancies, you will usually not want to activate this option.

Finally, a large number of products for Windows 10 remain. Their meaning is not immediately apparent, but this list should help clarify them:

Windows 10 Dynamic Update: Upon the start of an upgrade to the next version in Windows 10, the setup searches for updates that optimize the installation of the new release. In an interactive setup, the system asks the user whether to retrieve such updates. If doing the patch management via WSUS, you can make these updates available using this product.

It is not needed if you install the upgrade after starting a computer over the network or WinPE.

Windows 10 GDR-DU: The abbreviation stands for General Distribution Release – Dynamic Update. These refer to packages for the dynamic update of the current version of Windows 10, while Windows 10 Dynamic Update is responsible for all releases.

Windows 10 […] Upgrade & Servicing Drivers: These refer to drivers exclusively required during a dynamic update. These products are available for Windows 10 in general and also for every release. They also enable upgrading the current Windows 10 version.

Language Packs: There is a distinction here between language packages in general (Windows 10 Language Packs) and those the current release requires during a Dynamic Update (Windows 10 GDR-DU LP). There are also Language Interface Packs for languages not yet fully localized.

Windows 10 Feature On Demand: This refers to features you can add via the Control Panel under Programs or the App Settings under Apps & Features. The files for these features are preinstalled in most cases, and you can make them readily available when a Windows 10 PC needs one of them. Microsoft obviously wants to provide some additional features via Windows Update, for example the .NET Framework.

Windows 10 GDR-DU FOD: This refers to Features on Demand relating to the dynamic update of the current Windows 10 version.

As you can see from the list, Windows as a Service and its in-place upgrades are mainly responsible for the long list of products and the increase in complexity.

Hence, those who still migrate to new versions of Windows 10 via wipe and load do not need most of the products listed in WSUS. In this case, you can also omit the classification upgrade required for the in-place updates.

Leave a reply to Yannick Click here to cancel the reply