Paul Schnackenburg  Tue, May 31 2011Mon, Jun 4 2012  hyper‑v, system center  1
This part looks at Bare Metal Configuration of new hardware, cluster creation from within SCVMM 2012 and the new Dynamic Optimization feature for balancing the load in a cluster as well as Power Optimization for automatic shutdown of nodes during low load times.

One really cool feature in System Center Virtual Manager 2012that will be popular in large environments is the concept of provisioning new host hardware without visiting each new server.

Through integration with Base Board Management (BMC) controllers, Windows Deployment Services (WDS) and the new boot from VHD feature in Windows Server 2008 R2 this magic can happen.

The BMC on new servers need to support one of the following protocols:

Preconfigure DNS with the names of the servers that are going to be created but don’t pre-create accounts in AD. SCVMM can integrate with the PXE server in an existing WDS server and will only respond to requests from computers that you have designated as new hosts so the WDS server can continue to service other OS deployments. Alternatively you can setup a WDS server just for SCVMM. The library has new functionality for housing drivers needed by new hosts. Creating a host profile ties together BIOS, network, disk and driver settings along with OS settings and all that remains to do is provide IP addresses of the new hardware to the wizard to allow SCVMM to discover the new hosts. Only Windows 2008 R2 is supported as the host OS for these deployments as it uses the boot from vhd feature.

SCVMM 2008 could manage clusters but these had to be created outside of SCVMM and then brought under management, this can still be done in 2012 but the ability to create a Hyper-V cluster with just a few steps in a wizard directly within SCVMM 2012 is really useful. It’s also a logical step after a bare metal installation and cements SCVMM’s position as a total solution for the virtualized data centre.

Dynamic and Power Optimization in SCVMM 2012 ^

Perhaps the most awesome new features of SCVMM 2012 are Dynamic Optimization and Power Optimization and they’re supported across all three hypervisors. They replace the host load balancing that’s available through Performance and Resource Optimization (PRO) in SCVMM 2008 R2.

By default VMs are live migrated amongst host every 10 minutes with low aggressiveness (options are low, medium and high) to balance the load across hosts in the cluster when Dynamic Optimization is enabled. You can also manually choose Optimize Hosts without configuring ongoing Dynamic Optimization for a particular host group.

For host groups that have Dynamic Optimization enabled you can also optionally enable Power Optimization. Provided SCVMM has access to hosts through BMC and can thus power them on and off this allows SCVMM to shut one or more hosts in the cluster down during times of lower load and then power them on again as the need arises. It happens 24x7 by default but you can choose to only implement the feature during certain days / hours of the week. 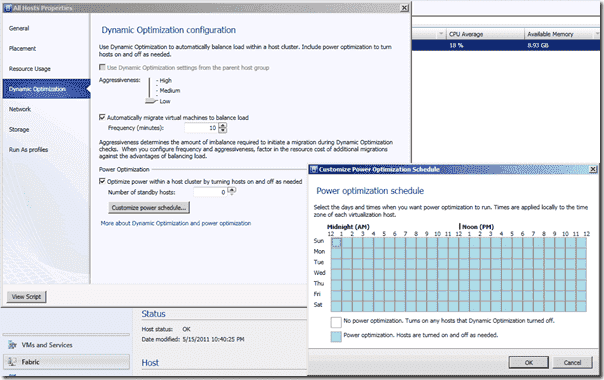